Two of the NBA's best offenses square off to open the 2012 NBA season. But offensively there is no comparison. Especially in the second half of the year the Sixers offense has been dreadful and it doesn't seem that playing the league's best defense will be the cure that Philadelphia needs.

Both teams are incredibly deep, with benches that could best the starting five for many nonplayoff teams. For the Sixers to make any progress in this series it is going to need to win the battle of the benches by a hefty margin. Lou Williams, Thaddeus Young and Evan Turner can score in bunches and they will need to. But they will have a tall task, literally, as Chicago's bench is stocked with the likes of Omer Asik and Taj Gibson.

Thaddeus Young. Young is an athletic freak with solid scoring instincts who is a matchup nightmare with his combination of his size and speed. The dynamic forward has been Philadelphia's top scorer the last month of the season and if he can give the Chicago big men fits the series could be stretched to six or seven games.

Derrick Rose. Not exactly a surprising pick but Rose is the difference between Chicago putting away their first-round opponent easily in four games and perhaps going the distance. Rose can set a tone early if he can navigate the Philly defense and find himself and his teammates easy shots. If he can lead his team to a big lead early in the game the offensively challenged Sixers might get discouraged.

UPDATE: Rose tore his ACL in the Bulls' opening-game win and is out for the remainder of the playoffs. That, to put it mildly, greatly changes the chances of the Bulls winning a championship.

Points are going to be at a premium for both teams in this series but there is no reason to think Philadelphia has the firepower necessary to shock the No. 1 seed. Chicago in 5.

After the jump see the preview for the rest of the Eastern Conference matchups. 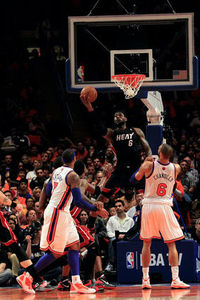 The Knicks are a better defensive team than they are given credit for and now that Carmelo Anthony has been awoken from his D'Antoni-enduced slumber, New York suddenly looks like an extremely dangerous team. If they could possibly get any production from Amar'e Stoudamire then they would have a chance against the stifling defense of the Miami Heat. The Knicks also have bench players that can hit an open shot but the problem for them will be getting open. The pressure for making that happen is largely on Anthony. The ball will be in his hands a lot and he will need to slice through the defense and make all the right decisions.

The Heat are a great team with a lot of great players but is their window already closing? LeBron James, Dwayne Wade and Chris Bosh are already entering the back half of their prime years and all have a lot of miles on their tires. I'm not saying that this is their last best shot but I have to imagine that there is immense pressure for the Heat to bring home their first ring for the big 3.

Tyson Chandler. We already talked about how important Anthony is to his team's offense. But I think even more importantly is Chandler and his ability to cut off the paint. Wade and James are always at their best when they can blow by their defenders and knife into the lane for a score or a couple of free throws. If Chandler can limit the Heat's effectiveness in the paint then the Knicks can grab rebounds off jump shots and get out and run, which would lead to some key easy opportunities on offense.

Key player for the Miami Heat

LeBron James. I'm anxiously awaiting the James vs. Anthony matchup. From the same draft class, the same disappointing results so far in their careers. They both have a lot to prove and they love to play each other. LeBron is the MVP this year and is far more talented than Anthony. But in head to head matchups James' teams are only 6-9 against Anthony's teams. Can LeBron put his stamp on the first round and make the league take notice that the Heat and Lebron won't disappoint again?

Miami just has too many weapons and the Knicks don't have enough plays on defense that can negate those weapons. Anthony is going to will the Knicks to a couple wins but I think the Heat are taking this one in 6. 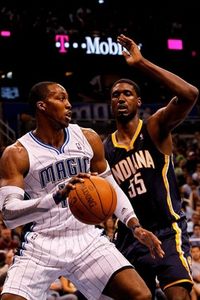 This series is just sad. The Pacers are the three seed thanks more in part to the disappointing teams that were ahead of them at one point as opposed to the Pacers getting stronger. The Pacers are a good team but they are not on the level of the Bulls or the Heat. They still have room to grow but they aren't going to go too far in this year's playoffs.

With all that said, the Pacers will be beating the Orlando Magic who have tumbled down the standings after losing starting center and the league's biggest malcontent Dwight Howard. Without Howard holding down the middle the defense greatly suffers and the team is unable to take advantage of the spacing on the floor, which their team full of jump shooters really needs to be effective.

And Howard being out really creates a crippling lack of size for the Magic. Orlando has nobody on the team that can slow down Roy Hibbert, David West or Tyler Hansborough. Even if the Magic defense is able to bother the Pacers players on the perimeter, Indiana is going to get a lot of second-chance opportunities.

Key player for the Orlando Magic

Dwight Howard. He's not playing. He might never play for them again, in fact. And as a result the Magic really have no shot in this series.

Key player for the Indiana Pacers

Roy Hibbert. Hibbert has a chance to get a lot of easy opportunities under the basket and will be counted on to grab a lot of boards. His lack of athleticism has somewhat limited his rebounding numbers but his sheer size and length should be too much for the Magic to handle, especially if he is matched up against Glen Davis.

The Pacers will put the Magic out of their misery in a quick four games and the fans in Orlando are seriously going to turn on Dwight Howard. 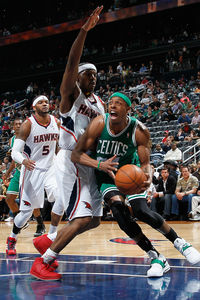 The Celtics have really picked it up in the second half of the season. And these two teams match up very well. And that is sort of a blessing and a curse for the Hawks. Whereas they would probably be heavily favored if they had Al Horford and Zaza Pachulia as their two primary big men. Now, they are likely to have neither for their first-round series against the Celtics. Boston relies on Kevin Garnett and rookie Greg Stiesma in the middle and their lack of size is their biggest liability.

So while the Hawks must deal with the fact that they aren't able to exploit Boston's biggest weakness at least their injuries mean they are now only on the same level as their opponent. The Hawks have quality defenders to take on the Celtics biggest contributors, with Kirk Hinrich able to be a best to Ray Allen, Josh Smith to turn Kevin Garnett into a low-efficiency jump shooter and Joe Johnson and Paul Pierce squaring off. That, of course, leaves the point guards.

Key player for the Boston Celtics

Rajon Rondo. It will be all about Rondo's ability to use his speed to disrupt the defense of the Hawks an his quick hands on defense to force turnovers and let his team get out and run. Rondo will need to have one or two of those vintage performances with 15 assists and only four shots.

Key player for the Atlanta Hawks

Josh Smith. Smith is a terrific defender but he is much more effective when matched up against either smaller or slower players. As a small forward he can cause serious problems, as a power forward, he can dominate down low and run out and get easy dunks, as a center ... well, i'm not so sure. While he can cause trouble for Garnett's offense, I think he will also have trouble putting points on the board when Garnett is defending him. And a series where Josh Smith has basically been canceled out is not one that the Hawks have a very good shot at prevailing in.

Joe Johnson isn't worth anything close to his contract but I think he carries the Hawks on his back in every single game. But, alas, that isn't quite enough as the Celtics prevail in six games.