Thanks to some outstanding work from Andres Alvarez and Patrick Minton, an incredible Wins Produced data set is available, including game splits that feature Wins Produced, its per minute derivative Wins Produced per 48 minutes, and Points over Par. That's an awesome contribution to advanced statistical analysis. Huge props, Dre and Patrick.

If you're like me, though, sifting through tables for too long can be boring and unproductive, no matter how interesting the data itself is. Further, once the game split data became available, I wanted to know one thing - trends. Is the production of the Pistons young players, like Brandon Knight, Greg Monroe, and Rodney Stuckey, trending upward, downward, or holding constant? And what about the production of Pistons veterans, like Tayshaun Prince, Jason Maxiell, and Ben Wallace? Who is age catching up with, and who's sipping from the fountain of youth?

If some nifty visualizations of awesome data are your thing, let's jump.

I've compiled the available Wins Produced data in three ways. First and second, game splits for Wins Produced and Wins Produced per 48 minutes. Third, by season totals. We'll go alphabetically by first name, if you'd rather be more selective in your viewing. You might also want to view this post in the Wide viewing angle. Last note, the red lines in the charts below indicate trends, the blue lines indicate statistical production (either WP48 or Wins Produced).

First up, Austin Daye. There hasn't been much to like about Austin's performance this season. But I'm feeling optimistic today, so let's go with, "He's not as crappy now as he was in December and January." Alternatively, "Austin has improved from one of the worst all-time to simply invisible as the season has progressed."

Next up, one of my all-time favorite Pistons, Ben Gordon. True to form for his time in Detroit, Gordon has been more famine than feast, but he's managed to have some really nice performances. Will it be enough to save him from the amnesty provision? JoD, I hope not.

Brandon Knight is the new Rodney Stuckey. Not in terms of performance, play style, or anything else to do with on-court production necessarily. Instead, Knight is polarizing. The numbers hate his game, but most people's eyes see potential stardom. Instead of arguing either side right now, I'll simply say this. Knight has had some brilliant performances, mixed in with a whole lot of really bad ones. If Knight can find a way to turn his bad into mediocre, he has a real chance of becoming a solid player.

I'll have a double shot of Langlois brand Kool Aid, now, thanks for asking.

Which I need desperately after noticing the trend across the season. No, that's not a mistake. Brandon Knight's statistical production has hardly improved at all as the season has passed.

The Benaissance of 2009-2010 will be one of my fondest Pistons memories, and while Big Ben's production over the past two seasons hasn't equaled his return season to Detroit, he remains remarkably effective in his role. What he's accomplished for this Pistons team at 37 years old is nothing short of incredible. And his Wins Produced numbers this season are getting better as the season goes on. Nasty.

Should Ben Wallace return for another season? That's up to him, and I hope he makes the best decision for him on his terms. But if he does, I'd expect we can count on consistent, solid production in a limited role.

Charlie Villanueva sucks. Saying anything more seems like a waste of precious internet bandwidth. I'll put as much effort into analyzing his production this season as he's put into producing anything meaningful for the Pistons. Which is to say, I'm done.

Damien Wilkins plays for the Pistons this year. Did you know that? I sometimes forget.

What the Wins Produced numbers won't tell you is that Damien leads the league in shot fakes per minute (I checked Synergy to be sure, seriously). Dominique, he is not, but you gotta love his effort and professionalism and all that other intangibly stuff he brings to the locker room, right?

But, the numbers indicate that he's struggled to take the next step this season. That doesn't worry me, and I don't mean it as a criticism. It's simply an observation, one that's tempered by all sorts of optimism. He's clearly the best Piston already, and he's got a chance to become one of the franchise's all-time greats.

In my view, his next step will require him to handle double teams more effectively (which he's sure to face more and more), and to mitigate his turnovers (which should happen as a result of improving against double teams). When he figures that out...

As always, my discussion of Jonas Jerebko on Detroit Bad Boys is a bit hyperbolic. Jonas Jerebko is not an All Star, and everyone knows it. But he's a very solid player who can help a team in a variety of ways, and he's paid reasonably for what he offers.

I was quietly worried about Jonas this season. The injury he sustained is hard to come back from. And while he's struggled with his outside shot this season, his overall production has been solid. And he's trending slightly upward.

I don't care if he starts, and I don't get the sense he does either. As long as he's playing, everyone's happy.

After an awful season last year, Jason Maxiell has bounced back nicely. He's slimmer, more active, and clearly more engaged - all of which have translated into on-court production. What he decides to do with his player option this offseason will have a significant impact on the Pistons front-court planning moving forward.

There's no way to know now what Dumars' best option will be then - there are all sorts of unknown variables. But, if Maxiell chooses to leave in free agency, Dumars will have an even bigger hole to fill up front than he already does.

And if both Max and Big Ben depart?

Moose, Jonas, Charlie + pray to the JoDs a big man from the lottery. There's your frontcourt.

I told you so! Rodney Stuckey was clearly on the cusp of breaking out last season, and Dumars made the right move by extending Stuckey for three years rather than retaining him with the Qualifying Offer.

Sorry, I must have mistake myself for The Boourns there for a second.

In seriousness, while I don't think Dumars' decisions should be validated by hindsight, Stuckey is doing everything he can to do so. He's playing the best, most consistent basketball of his career. He's shooting the three respectably, and he's getting to the line often. With every other Pistons fan on the planet, I am hoping these are legitimate, sustainable improvements to his game.

And maybe it's just me, but it seems like Stuckey's being overlooked and under-appreciated, even in the Detroit media. What's up with that?

Tayshaun Prince looks his age. That's the nicest way I can manage to say it. While he's playing better now than hewas in December, he's simply not the player he was five years ago, and with each game that passes, his future role with this current group becomes increasingly unclear.

He shoots (and misses) way too much. He kills possessions like a black hole. He doesn't run the floor as well as he used to. And on and on we could go.

Here's hoping he's traded to a decent team this summer where he can finish his career trying to win something meaningful, rather than floundering in a confused role on a rebuilding team.

I could swear I was saying something almost exactly like that a year ago.

I want Will Bynum to be MFWB again (that's Marvelously Fantastic Will Bynum for the uninitiated).

Really, sincerely, I do. But he ain't. Or at least, he hasn't been. Yes, there have been some flashes and some nasty highlights. But overall, I can't shake the feeling his time in Detroit is coming to an end.

Somewhere, khandor is quietly whispering, "I told you so..."

It's hard to say anything bad about Walker Russell Jr. He stepped up when the team needed him desperately, and he made the most of his opportunity. Even though he can't throw the ball in the ocean, he's made some solid contributions this year. I've enjoyed pulling for the guy.

Seems fitting that a guy like him would get his shot for a team like Detroit. Nothing but respect and appreciation.

Finally, the team totals for the season. Wins Produced says that Monroe, Jerebko, Stuckey, and Wallace are driving this team's success. No one would dispute Monroe and Stuckey, but Jerebko and Wallace might raise a few eyebrows (or ideally, one single eyebrow, if you know what I mean).

But most surprisingly for many is that Wins Produced suggests that Brandon Knight is actively losing games for the Pistons, not winning them. Undoubtedly, some will write off Wins Produced off hand because of this. That's fine.

But, if you're interested in discussing why Wins Produced says what it says about Knight or in general, I'll do my best to be active in the comments for the next couple evenings. 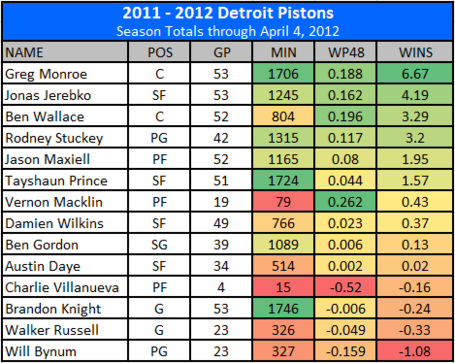 Again, props to Dre and Patrick for making the data available. Be sure to hit them up on Twitter (linked in the opening) and let them know you appreciate it.