Detroit's Brandon Knight has placed 8th in rookie of the year voting in a list honoring its winner, Cavaliers' guard Kyrie Ivring. Knight received 21 votes of the 1072 cast by a panel of 120 sportswriters and broadcasters throughout North America. Irving was far-and-away the clear winner, taking home 592 votes including 117 for first place honors.

Rookie of the Year voting, like other voting for annual NBA awards, is largely a popularity contest by sportswriters. That's not to take away their merit or value-- it's hard to cherish Ben Wallace's 4 DPOY awards while knocking the vote in another breath. However, in the same way that draft consensus is often established months before draft night, Rookie of the Year awards are often decided early on. In situations like this, real talent gets overlooked and under-rewarded to instead favor the flavor of the month. To compare and contrast, what do the advanced stats say about rookie talent in 2012? Let's take a look after the jump. 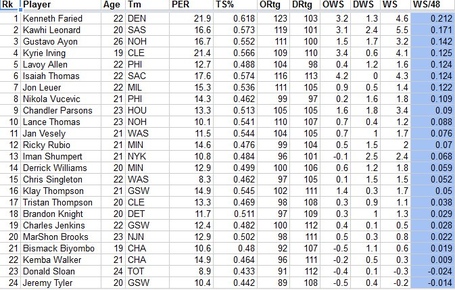 The data in this image shows the 24 rookies who started 10 games or more in the 2011-12 NBA season. The list is sorted by winshares per 48 but includes a collection of the top advanced stats most commonly used by sports analysts.

These numbers suggest that the most productive player in 2011-12 was Kenneth Faried, as favored by per minute winshares, PER, TS% and O/D-rating margin. If the sportswriters and broadcasters prefer Irving and the advanced stats largely favor Faried, who is right? While picking a side is a subjective endeavor, it's important to note that Faried was his team's most productive player this season, and was an instrumental part in the team's 7-game run against the LA Lakers.

How do Brandon Knight's numbers match up to his Rookie of the Year results? Knight is listed as the 18th most productive rookie by the win shares metric, 17th in PER and 11th in TS%. One of Knight's strengths, 3-point shooting, helped buoy the TS% numbers which belie his low 41.5% field goal shooting average. Most telling is the poor O/D-rating margin of -12 which places Knight near the bottom of the pack.

What does this say for Knight's future? I'll leave that up to you in the comments. One important point of note is that Brandon Knight's poor rookie numbers didn't come from lack of trying, as he led all rookies in minutes played, field goal attempts and three point attempts.

Who is your Rookie of the Year? Who is in your top 5? Where does Brandon Knight place-- not for his potential, not for who he might become, but for what he did during his rookie season.