As I perused the Portsmouth Invitational commentary, I came across Kyle O'Quinn, a player I apparently missed during the NCAA tournament this year. Just like every year since Art, I try to find a big in the 2nd round that I'd love to see us draft. This year, my cart is being hitched to the horse of Kyle O'Quinn. So why Kyle O'Quinn? Well what first struck me was his overall frame, but what sealed the deal was his ability to wear his emotions on his sleeve...something the Pistons have missed out on since Roscoe was around. In all seriousness, the following column will present what I believe to be a great argument for going after O'Quinn with either of our 2nd round picks. 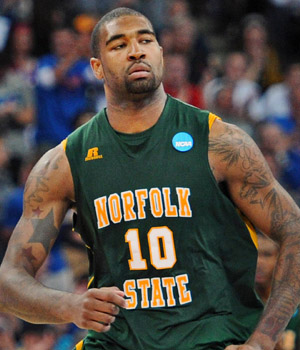 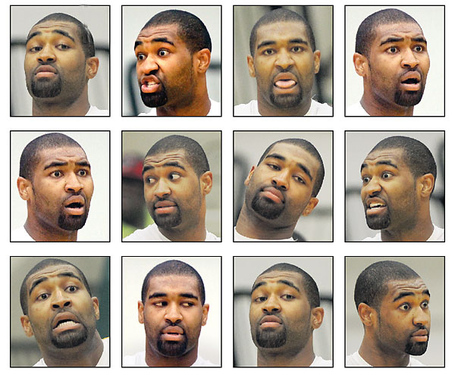 O'Quinn pictured above, measured 6'8.5" without shoes, 6'10" with, and 241 pounds at the Portsmouth Invitational. He sports a standing vertical of 30.5" giving him solid explosiveness for a man of his size but perhaps the most compelling aspect of his physical stature is an impressive 7'5" wingspan (for comparison sake, he's 10 pounds and 1 inch less than DeAndre Jordan but with a comparable wingspan and a better vertical). The wingspan and leaping ability were translated into 2.7 blocks and just over 10 rebounds per game in 31 minutes of play, both of which should translate to the NBA given his overall size and athleticism.

While O'Quinn didn't play against the greatest talent this season, he did have a few games against solid talent and is best known for his key play in Norfolk State's upset of Missouri in the 1st round where O'Quinn put up 26 points, 14 rebounds, 2 blocks, 2 assists, and a steal while shooting 63% from the field. He also added a key putback bucket in the final minute that gave Norfolk a 3 point lead after completing the And 1. In addition to his play against Missouri, he also played solid games against Marquette and Virginia Tech.

Against a relatively weak conference however, O'Quinn dominated both ends of the floor. While I don't know how much stock Win Shares holds at the NCAA level, O'Quinn still led his team in both Offensive Win Shares and Defensive Win Shares (4.2 and 3.6 respectively). In fact, he was so important to his team, that if you took away his DWS entirely, he'd still be the most impactful player, or the 2nd most impactful if you took away his OWS.

He was the only player on his team to average more than 4 rebounds per game, was 3rd in assists, and had 60% of his team's total blocks for the season with 97. He put up his team's highest O-Rating at 116 and his team's lowest D-Rating at 90 (a full 8 points lower than the next closest player). In short, Norfolk State is nothing without Kyle O'Quinn. He also earned both the MVP and Defensive Player of the Year awards for his conference 2 years running.

As you'll see from O'Quinn's averages each year, he's improved every season. That improvement combined with being comfortable as the focus of his team's offense and spending 4 years in college should all lend themselves to a solid work ethic and someone who could come in and immediately challenge our relatively weak frontcourt for well-earned minutes. He's often described as "having a high basketball IQ" (although not surprisingly, ESPN contradicts this assessment) works well out of the pick and roll, and can consistently hit the 10-15 foot jumper.

He took home the somewhat meaningless award of MVP from the Portsmouth Invitational where he pulled down 12 boards and added 6 blocks.

Why does O'Quinn Make Sense?

I think plenty of us would love to see us go big in the 1st and follow it up with targeting a guy like Scott Machado in the 2nd (I've already done a draft day dream on Machado), but if Machado ends up going before we have a chance at him or Joe decides to go with an inexplicable "BPA" mentality and take a slipping Bradley Beal, then an athletic big with high basketball IQ in the 2nd round will be just what we need. While he's already 22 from playing all four years, he seems to be a player who supports his coaches, listens to his mama, and gives credit where credit is due. Sounds like just the type of player that would consistently challenge Monroe in practice, while fighting for valuable minutes alongside Macklin and Maxiell. Most importantly, his defensive abilities would lend themselves well to the tutelage of a twilight Ben Wallace, back due to popular demand for one more year.

Lastly, if, somehow, we can get Machado with our 1st pick in the 2nd, and O'Quinn is still available with our 2nd pick, passing on him would be a massive mistake...