Charlie Villanueva will not be representing the Dominican Republic at the 2014 Olympics. Villanueva recently worked out for the Dominican team, as coached by Kentucky Wildcats head coach John Calipari, where he failed to impress.

"Charlie was not in good form when we saw him," Calipari said to Deportes en la Z.

"He was overweight, and unfortunately, we could not slow down the entire team and it was a decision taken collectively.

Ouch. It sounds like Charlie brought a little more chunk than chisel to his workout in NY. This is not good news for Pistons fans hoping to trade Villanueva before the end of his contract, leaving the expiring contract or amnesty option as the two remaining outcomes. Even the most optimistic Pistons fans, those that believe that Charlie could turn things around on court, may have a hard time swallowing this news.

After a mysterious foot injury then a series of aftershocks, it was hard to see Villanueva's situation get much worse. It's like a weird comedy of errors and we're chained to our front-row seats. When will it end?

Lol, this is hilarious, the media something else, anyways, 730am boxing class tomorrow who's coming?

He also posted the following picture with the caption "Lol case closed": 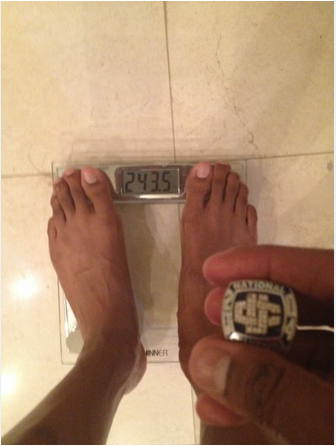 Now blog that, lol, going out for a swim now

"Lol case closed [I'm overweight]" or "Lol case closed [I was a national champion]"? That ring isn't 15 lbs, is it? CV is listed at 232 on his NBA.com profile and he wasn't exactly a svelte specimen beforehand, so this picture he just posted on Twitter would make him almost 12 lbs heavier. Lol. -- BP.