17 again. And I'm not talking about that Zac Efron/Chandler Bing flick, which was ... made.

I'm talking about our favorite genital-teasing basketball team against Joakim Noah and these Bulls. 17 is the biggest lead the Pistons have had in each game against the Bulls this season. Both times, the Pistons blew it and lost. The current losing streak to the Bulls? 17.

In December, Joakim Noah's career night proved to be too much. Wednesday night, Noah wasn't as great (although he had 10 points and 18 rebounds), but it was his hustle play in the final seconds that served as the stamp on the Pistons' collapse.

If you dare to defy Blaha and can bare to watch, here it is:

Not liking my meatballs spicy ever again. Only schwetty.

Noah's hustle play deserves nearly all the credit here, but you have to wonder about the sleep-walking Pistons. In my opinion, Brandon Knight's the only one who seems to react to Noah's acrobatic play by avoiding the save from being thrown off him, but that's not saying much. There are others, like MrHappyMushroom, who feel Knight was the most egregious offender defender here. Whatever.

Others might argue the refs gave the Bulls a break [pics via @BegleyBen]: 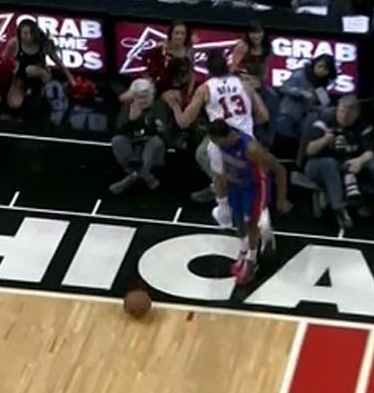 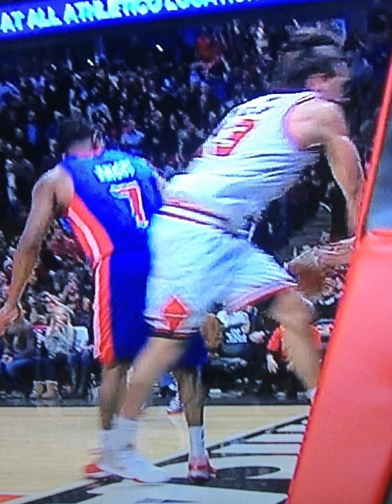 It's close - I don't know the right call. Whatever. It shouldn't have come down to this play. But it did and the Pistons approached it how you would suspect a team who blows double-digit leads on the reg might.

So what happened? Well, to be fair, the Bulls amped it up both offensively and defensively. Former All-Star Piston Richard Hamilton scored nine points in the final 10 minutes of the third. Nate Robinson put on his mini-Superman cape in the fourth and screamed at the top of his little lungs. For the Pistons, Knight started forcing bad shots and stopped doing the point guardy things that got him seven assists in his first 25 minutes. Lawrence Frank's hard stop for Andre Drummond is apparently at 22 or so minutes.

The Bulls started the fourth on a 13-2 run, tying the game for the first time since tip off. After that, the Pistons abandoned everything and just had Stuckey and Prince take every shot thereon. (Okay, 10 of 13.) They only made three. They were 10 for 28 overall. Yet, when the Pistons needed a three at the end of the game, each got an opportunity to hit it. They both clanked it.

• Drummond's 22-plus minutes produced eight points, seven rebounds, a steal and a block. You have to wonder if the outcome would've been different if Drummond was given a little bit longer of a leash.

• Singler starts in place of Stuckey, so why wasn't he in at the end? He's a better three-point shooter than Stuckey and he made as many shots as Stuckey on nine fewer attempts.

• Greg Monroe took a lot of ugly looking shots. They went in early and then, unsurprisingly, they stopped going in. He looked scared to make any type of play late in the game.

• Charlie Villanueva only played a little over five minutes. No Daye? T'what? I'm surprising myself.

• How about that Jimmy Butler guy Shiny told us to watch out for? 18 points and nine rebounds. Speaking of Shiny keys, I'd say the Pistons were 0 for 3.