The Pistons didn't have a double-digit lead to blow this time, but they showed they could "hang" with the Miami Heat through the first 19 minutes. Then, LeBron James and Dwyane Wade "flipped the switch" into superstars mode.

With the Pistons up by nine in the second quarter, James and Wade scored 24 of the game's next 27 points, and at one point during that stretch scored 12 straight overall. That nine-point Pistons' lead was all of a sudden a nine-point Heat halftime lead.

Well, not exactly; there was still a second half, which started by Brandon Knight getting trapped in the corner and assisting James on an easy dunk. 26 of 29 points.

Greg Monroe made the game somewhat bearable, though. In the third quarter, the third-year big man tried to match James and Wade point for point, scoring 14 of his game high 31 in the frame. Unfortunately, he received almost zero help from his teammates, as they would add just three points to his total in the quarter.

Monroe finished with his 17th double double of the season by also grabbing 12 rebounds. Statistically, he was better than James or Wade, but he wasn't better than both combined. The All-Stars' 52 points, 14 assists and 12 rebounds were almost good enough to beat the Pistons on their own.

• DrumMonroe saw 11:13 of action together on the court and it was pretty calculated - they played together to end the first and third quarters and to start the second and fourth. They had an even plus-minus with their best stretch coming in their most time together at the start of the second quarter - 10-4 in 3:46.

• Overall, Drummond saw his 5th most PT of the season with 25-plus minutes. He finished with six points, seven rebounds, three steals (two from Wade on back-to-back possessions!) and two blocks.

• Look at the pic on the right and the caption - looks like he fouls the ball, which must be a part of the untouchable LeBron James: 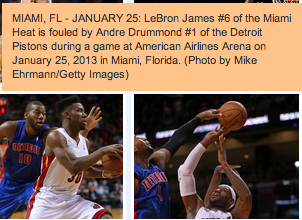 • I'm hoping to get video, but during that 12-point stretch by James and Wade, James got away with at least 5 steps on a dunk. This is nothing new, of course.

• For the second straight game, Knight showed a little more point guardyness than his teammates, racking up five assists opposite three turnovers in 27 and a half minutes. Once again, though, Knight backed up a strong first half with a shitty second half.

• Will Bynum had just one assist with four turnovers, but he was the only other Piston to score in double figures (13).

• The Pistons only had 11 team assists.