Pistons trade: Who are the winners and losers of 3-team deal?

Share All sharing options for: Pistons trade: Who are the winners and losers of 3-team deal?

The deal is going to have reverberations that run deep -- each player is moving on from the only teams they've ever known. Toronto is taking a big risk on a big-salaried player, Memphis is trying to explain to its fan base that they can still compete for a championship and Detroit is waving goodbye to the last player from its latest championship era.

But there are winners and losers to every deal and this one is no different. While its premature to pass real judgement on anything before the players actually step on the court with their new teams we can share a gut-level feeling on how this might shake out.

This deal was a literal no-brainer for Joe Dumars. Not that saying goodbye to a player that has meant as much to an organization as Prince has meant to the Pistons, but Detroit is shedding itself of significant long-term salary, and might be getting the most productive player in the deal in Calderon. Jose, incidentally, is the first real point guard Motown has had since trading Chauncey Billups. Detroit and Calderon can both use the second half of the season as a test run on a possible long-term relationship. If things click Detroit can re-sign him in the offseason and if not he can move on.

I'm just not seeing what they see in Rudy Gay. Yes, he is a good player and will probably be so for the next several years. But he's not worth $37 million for the next two years. And it's not like the Raptors were one player away, either. They have a couple good pieces but Gay doesn't turn them into contenders. And by the time they might actually be a quality playoff team Gay will be close to out the door.

Related: Is Detroit done dealing?
What does Detroit's new rotation look like?
Can Calderon make Monroe and Drummond stars?

I've seen a lot of reactions indicating that Memphis closed their own championship window by dealing away Gay for Prince. I disagree. Gay is the better player, yes, but he isn't that much better than Prince. Gay is overrated largely because his insane athleticism creates a few jaw-dropping moments a month. But while highlight plays forgive a lot of sins in fans' eyes, you can rest assured that the Grizzlies' front office knew exactly what they had in Gay -- and what they could get out of Prince.

I hate to keep harping on the Raptors here but I just don't get it. The Raptors had their share of problems, chief among them the $32 million owed to the oft-injured and oft-ineffective Andrea Bargnani. They had a real asset in Jose Calderon both as a player and as an expiring contract. The only way the could ever conceivably deal Bargnani was in a package with Calderon. Now Jose's expiring contract is gone and replaced with Gay's bloated deal. That means the Raptors are essentially capped out until 2015 and they have marginal room to make improvements between now and then. And as it stands, what is their ceiling? A sixth seed in the Eastern Conference?

Prince was a player who didn't exactly take the Pistons' fall from the top of the Eastern Conference gracefully. And Grizzlies coach Lionel Hollins chafed at all the talk the last month of how the Grizzlies were going to tear it down to avoid the luxury tax. I think this player and coach combo are a match made in heaven. Prince gets to go to a veteran team as a complementary piece and play for an old-school, defense-first, grind-it-out coach. And while Hollins loses Gay, he does get a player in return who will rarely make mistakes and will execute the defensive game plan.

This being a Pistons blog, I suppose now is the time to really examine what it means for Pistons players. The biggest hit might be felt by Will Bynum, who was just starting to emerge as a sparkplug off of Detroit's bench. Assuming he's not traded, Bynum looks like he might be the odd man out of the rotation. While who starts and who comes off the bench is up in the air, there is no doubt that Calderon and Brandon Knight will play the bulk of the point guard minutes. Of course, Bynum is probably the most easily trade-able piece Joe Dumars has left so we'll see what happens.

Jerebko might go from completely out of the rotation to getting serious minutes as a backup to Kyle Singler. And the better he plays, the more minutes he'll get because while you could pretty much set 30+ minutes in stone for Prince, Singler does not have that luxury. It will be up to Jerebko to take advantage of the opportunity.

Even if Knight starts this new era as the starting point guard in Detroit, I don't think it will be long before the evidence in front of our eyes dictates that Calderon should be leading the team. It was somewhat easier to paper over Knight's lack of point-guard skills when his backups were Bynum and Rodney Stuckey, but playing alongside Calderon the difference will be noticeable.

Now Knight can slide into what might be a much more effective role as a quick, sweet-shooting sixth man. He'll have less responsibility of creating for his teammates and will be going up against more backups. And it also allows him the opportunity to learn how to be a point guard from an actual NBA-caliber point guard.

The offensive game of every Pistons player

I don't think I'm overstating it when I say that Calderon is going to open a lot of eyes pretty quickly in Detroit. Despite not having a real point guard on their roster, the Pistons had managed a mediocre offensive output this season. They now have a pass-first point guard that is going to make everyone else's job easier and their game's better. Calderon will put players in spots to be successful, particularly the Pistons' big men Greg Monroe and Andre Drummond on pick-and-rolls and Singler and Jerebko on basket cuts and hustle plays. 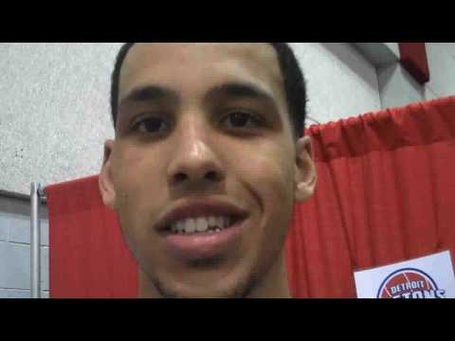 They said Prince was unmovable. They said Dumars would sit on his hands again as usual. They said that he was so invested in Brandon Knight he would never do anything to threaten his spot as PGOTF. This move could go a long way toward salvaging the reputation of a personnel man who has taken a beating over the past five years. Now he's going to have loads of cap space this summer to either cement his reputation as one of the best or cement his reputation as washed up.