The Pistons have historic rivalries with both the Bulls and Pacers. Could this be the season that all three emerge as contenders at the same time?

Once upon a time, Michael Jordan was a ringless 27 year old. A six-time All Star, an MVP, a Defensive Player of the Year. But a guy who couldn't win a championship. Because of the Pistons.

The Indiana Pacers had emerged as one of the best teams in the league and, with most of their core in their early 20s, they looked well-equipped to stick around. Coming off a 61-win campaign, nine games into the 2004-05 season against the defending champions, Ron Artest and Stephen Jackson tore it all down by attacking fans. Nearly a decade later, Pacers fans still blame Ben Wallace for The Brawl.

The three top teams in the central division have a long history, rivalries that one wouldn't necessarily classify as friendly. The Pacers and Bulls also had their own clashes, most notably through the 1990s when Jordan and Reggie Miller were the best at their position in the league.

It's interesting to take a look at the past 30 years between the three teams. It essentially looks like a game of King of the Mountain. Each takes their turns at the top, and one of the three are almost always contenders on any given year. 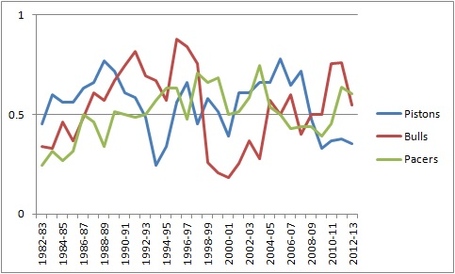 That could change this season.

The Pacers used their league-best defense and emerging star Paul George to take the eventual champs to seven games in the Eastern Conference Finals. They spent the offseason adding to their depth and getting Danny Granger healthy, and are primed to improve on last year's performance. A below average three point shooting team last year, they added C.J. Watson and Chris Copeland to provide much-needed floor spacing. They let Tyler Hansbrough walk in restricted free agency, instead trading for Luis Scola at the expense of youth, last year's first round pick Miles Plumlee and a future first round pick.

It's tough to remember when Derrick Rose was healthy and the Bulls - not the Heat - were the team to beat in the Eastern Conference. It was way back in 2012.

Last year's squad had no chance of continuing their two-season streak of the top seed in the East intact without Rose, but it wasn't a wasted season as they still managed to win 45 games and win a playoff series thanks to grit and defense. While the Pacers are going all-in on their current core, the Bulls have been collecting youth who are now starting to pay dividends - primarily with Jimmy Butler emerging as an elite three-and-D guy last season. They have several other nice young pieces to help build for the future including Jeff Teague's little brother Marquis and first round pick Tony Snell - but the crown jewel won't join the team until next summer at best, the 22 year old MVP of ACB, Nikola Mirotic.

Anything short of 50 wins this year will be a disappointment for the Bulls or Pacers. But it'd be a huge win for the Pistons, an increase of at least 21 wins and signal that Joe Dumars regained his magic that was so elusive for the past five years.

The Pistons have plenty of supporters in the media who are bullish about their potential to turn around, most notably Wages of Wins who predict them to finish as the second best team in the conference. Ben did a great job breaking down the Pistons' chances to surpass the 50 win mark. The short story is that it's a stretch, but possible behind strong rebounding and defense.

Dumars injected the team with athleticism, adding Brandon Jennings and Josh Smith through free agency and Kentavious Caldwell-Pope and Tony Mitchell through the draft. He also brought in a trio of MVPs, former Finals MVP Chauncey Billups , Italiain League MVP Luigi Datome, and the Chinese league's player of the year Josh Harrellson. Also boasting the best young big man combo in the league with Greg Monroe and Andre Drummond, there's no denying the talent. The fit? That remains to be seen.

Each of the three have their own question marks for the season, but are built around gritty, defensive oriented approaches. It'll be an interesting race.

If the Cavs can find a magical roll of duct tape, they could be pretty damn good too. But they probably won't be. Kyrie Irving's skeletal system is made of paper mache. Anderson Varejao was a beast last season until getting creative with his third straight season ending injury, a blood clot in his lung. Oh hey, I know! Let's use the top pick in the draft to take a dude who just had shoulder surgery, then let's pay $25 million a guy whose Wikipedia page has 14 hits on "injur." Sound strategy!

Healthy, Andrew Bynum is one of the best centers in the league. But he's shown no indication of being able to stay healthy or play a moderate amount of minutes in the NBA. Anthony Bennett received plenty of attention for his shoulder surgery that kept him out of most pre-draft activities and led to him gaining 20 pounds. Receiving less attention was that injuries shortened his junior and senior years of high school. A pattern of injuries and gaining weight from those injuries probably won't bode well once hitting his 20s and playing an 82 game season, just guessing.

There's no denying the talent, and the team has some decent role players with Dion Waiters, Tristan Thompson, Jarrett Jack, and Sergey Karasev. But with the top-shelf talent on the sidelines, Cleveland will boast a win totals in the 20s for the fourth straight year.

Former Piston John Hammond...can we all just agree that he's a bad general manager? How does he still have a job? Milwaukee's not very good, hasn't been very good, and shows no signs of being very good in the future. Their roster is convoluted, unbalanced, and lacks talent.

The Bucks have a decent frontcourt with Ersan Ilyasova and Larry Sanders, and John Henson also looked solid as a rookie in limited minutes. O.J. Mayo, Carlos Delfino, Gary Neal, Luke Ridnour, Zaza Pachulia, all decent players. But this is exactly the type of recipe that's led to the past five years of results for the Bucks - annual contenders for the 8 seed.

Last season's trade for J.J. Redick is a prime example of how the franchise got here and stays here. They traded two talented prospects Tobias Harris and Doron Lamb for Redick, who would be a free agent at the end of the season. Redick struggled with the Bucks' weird backcourt of Brandon Jennings and Monta Ellis, chose to sign elsewhere, and the Bucks were only able to salvage a pair of second round draft picks thanks to a sign and trade. Meanwhile, Harris finally received some minutes in Orlando and proceeded to put up 17 points and 8 rebounds while Lamb looks like he could be a great three point threat. Hammond's asset management is just totally perplexing.

Look for the Bucks to continue in their usual spot - somewhere just below .500.