The Pistons have until Oct. 31 to offer Greg Monroe an early extension -- but that's almost certainly not going to happen. Instead, expect Monroe to hit the market next summer as a restricted free agent.

There has been little news regarding the Detroit Pistons working out an extension with big man Greg Monroe even though the deadline for a new deal is Oct. 31. Now, it seems the team is unlikely to strike a deal with Monroe and is prepared to watched the season play out before worrying about his re-signing him, according to Vince Ellis of the Detroit Free Press.

There's a reason why you haven't heard a lot about Greg Monroe's contract situation - there's nothing to report.

It's highly likely that the fourth-year power forward won't receive a contract extension from the Pistons before the Halloween deadline, meaning Monroe will be a restricted free agent next off-season.

There are a number of factors at play regarding Monroe's extension. Even if the Pistons don't agree on an extension with Monroe before the deadline they can still make him a restricted free agent with a $5.4 million qualifying offer. It's unclear what negotiations have taken place between the sides, but the Monroe can sign a five-year deal as an extension. The team would only have to match up to four years if he signs an offer sheet from another team as a restricted free agent. This is similar to how the New Orleans Pelicans handled Eric Gordon last summer.

The importance of early contract extensions 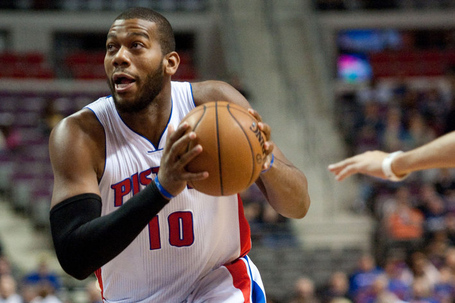 At this time of year, rookie-scale extensions should start happening. But they're not. Why? Mark Deeks looks at the many factors to consider.

There's also the matter of teams having only one five-year extension to designate to a player on a rookie contract. The Pistons may prefer holding onto that option for promising big man Andre Drummond instead of Monroe.

Detroit drafted Monroe with the seventh-overall pick in the 2010 NBA Draft and he has been a building block for them since joining the team. He averaged a career-high 16 points per game along with 9.7 rebounds last season. The Pistons significantly altered their roster with the additions of Josh Smith and Brandon Jennings and could use the season as a test-run for the changes they've made before committing to a big extension to Monroe.

Either way, Detroit has leverage in this situation. If Monroe is holding out for a five-year deal the Pistons can wait a year and match any four-year offer. If the roster isn't working out the team can explore their options during the season and summer without a large, guaranteed contract complicating discussions. There's no risk for Detroit holding out to see how their new team performs.

This article was written by Drew Garrison and originally appeared at SBNation.com