With the Pistons and Wizards meeting again in next week's regular-season opener, you wouldn't blame Washington's head coach for holding a little something back. He claimed before the game he wouldn't, although his late-game rotation suggests otherwise.

The Pistons don't lose to the Wizards very often. Even the last several years, when the Pistons struggled against most of the league, they've managed to win 14 of their last 16 regular-season meetings, including their last six. 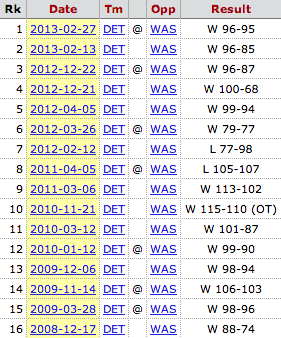 It's actually a bit surprising, and a trend I didn't initially realize was this lopsided. But look to the right: charts don't lie.

(And bear in mind, this doesn't include preseason games: in addition to Tuesday's win over the Wizards, Detroit also beat them in the 2010 preseason, although the Wiz did manage to win in 2009's exhibition ... thanks to Gilbert Arenas' 24 points. You know it's been a long time when Arenas did something relevant.)

Given Washington's history of futility against the Pistons, it's almost unfair how the NBA gave Detroit an advanced look at the Wiz just eights days before they meet in the regular season opener. But Wizards head coach Randy Wittman denies giving it much thought, telling reporters before Tuesday's game that he treated the game just like any other exhibition without worrying about their impending opening night date. From Vince Ellis of the Detroit Free Press:

"There’s no secrets in this game," Wittman said. "Really, we’re just kind of focused on ourselves in exhibition games -- not so much opponent. Obviously that changes when the regular season starts. Right now I want to focus on where we need to improve, and when next week gets here we’ll get into a little strategy."

He expressed similar sentiments in a quote in the Washington Post:

"We’re worried about us. Where we need to improve, we’ve got to improve offensively, our execution, our turnovers, that’s what I’m worried about. We won’t scheme this game like we will come the 30th. We’re going to play our standard. Just like it’s a practice down here. I just want to see us improve in areas we need to improve."

Maybe he's telling the truth, but it's hard to tell. Wittman didn't play a single starter during the entire fourth quarter. I'm sure some of that is simply trusting the unit that closed the gap and pulled even, but still, given the amount of time that John Wall missed last year, wouldn't it be beneficial for him to play crunch time minutes with Bradley Beal?

You'd think so. And if these teams weren't about to meet in a game that actually counts for something in a week, I suspect that might have happened.

Pistons vs. Wizards 2013: Live coverage, news and highlights for the season opener