There are reasons to be optimistic about Brandon Jennings beneath that sub-40% shot. The new scenery, new teammates and a chance to build on his established strengths could show an improved player to Pistons fans in 2013-14.

When the Detroit Pistons reached past Trey Burke and Jose Calderon to tap Brandon Jennings as their next point guard, the response was mixed at best.  In fact, on a long list of free agents and draft prospects, Jennings may not have been a top five point guard option amongst fans, the media and even NBA general managers.  Having been left alone at the free agent dance without an offer sheet, it was a sign-and-trade that would decide his fate.  Brandon Jennings is now a Detroit Piston, and despite the lack of appeal at first glance, I'm optimistic about what he can bring to the team. 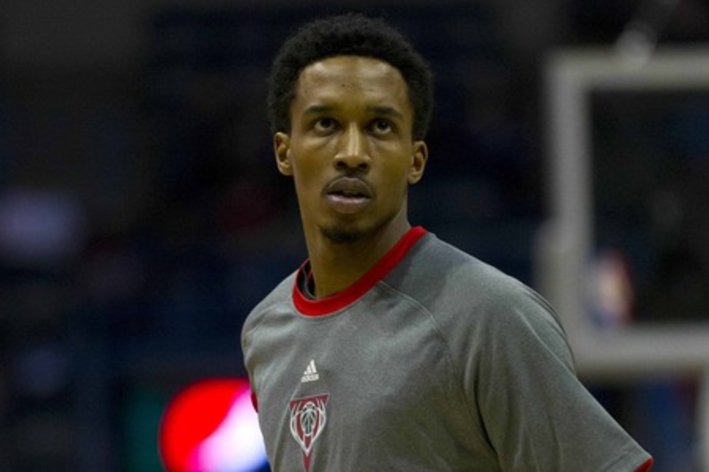 As with my very public skepticism about the Josh Smith signing, I believe my optimism in this case is objectively justified.  Many fans have a built-in expectation of "All Star" Josh Smith's value as a player and how he can improve the Detroit Pistons.  Other fans, myself included, may have perceived Jennings as an inefficient volume-scoring guard with an attitude.  As is true with Smith, there is more to the story with Jennings.  It's there in the numbers, and hopefully fans will see it in the flesh from Jennings in 2013-14.

Despite his impending free agent status, Brandon Jennings didn't appear to play 2012-13 with a contract year chip on his shoulder.  He slightly regressed after career high scoring (and shot attempt) numbers from the previous year, but not enough to raise any flags.  He seemed to be the player he always was-- a gifted ball handler who just can't stay above 40% from the field to save his life.

"Gifted ball handler" may not be a phrase you'd expect to hear about Jennings, but it suits him. Amongst guards that started at least 10 games last season, Jennings was 57th in turnover percentage despite a very high usage rate.  His 2.6:1 assist/turnover ratio doesn't compare favorably to a guy like Jose Calderon, but it is head-and-shoulders above the 1.5:1 a/t ratio of his trade counterpart Brandon Knight.  Knight should not be the standard by which Jennings is judged, but his ability to keep control of the ball despite such significant scoring and passing numbers is something to be admired.

There's a question about the balance between scoring and passing that should be addressed.  Jennings attempted 15.6 shots per game last season and dished out 6.5 assists.  Is this kind of ratio par for the course for Jennings, or might the Pistons see a bit more of a passing game from Jennings next season?  Jennings shared the backcourt in Milwaukee with the ball-dominant Monta Ellis who never truly plays off-the-ball.  Beyond that, Milwaukee's only other scoring option in the starting lineup (and only for part of the season) was Ersan Ilyasova, a fine player but possibly Jennings' only true catch-and-shoot option for most of the season.

A change in coaching may also have had an impact on Jennings' point guard purity.  32 games into the season, Milwaukee dumped head coach Scott Skiles and promoted Jim Boylan in the interim.  Under Boylan, Jennings shot less and passed more, a small shred of evidence but enough to justify a hope that there might be more in Brandon Jennings.  In 32 games under Skiles, Jennings attempted 16.5 field goals per game and handed out 5.8 assists.  Playing for Boylan, Jennings shot 15 attempts with 7 assists per game for the final 48 of the season.  It could be a fluke, but it's better to have evidence for hope than no evidence at all (ahem, Brandon Knight).

Last, it's important to look very closely at Brandon Jennings' shooting in 2012-13.  Jennings missed 9.4 shots per game last season.  That's incredibly costly, and the list of names of people who missed 8-10 shots per game but didn't score 20 points (and were not injured last season) is ugly.  You know, guys like Monta Ellis, Rudy Gay and Josh Smith.  Hope shouldn't be lost for Brandon's shot selection, however.  More on that in a minute.

Brandon Jennings' low shooting percentage isn't as bad as it appears at face value.  Those missed shots mentioned above are bad, and in all honesty, they should be viewed in part as turnovers, but low 40's from Brandon Jennings is not like low 40's from Rodney Stuckey.  Last season, Brandon Jennings attempted 32% of his shots from beyond the arc.  His solid 38% 3-point shooting lowers his field goal average accordingly.  This season, now that Jennings will be paired with two (or even three) capable pick-and-roll big men, I expect Brandon to attempt even more 3-point shots.

Last season, Jennings' most effective three-point shot was attempted during the pick-and-roll as the ball-handler.  On the 103 Synergy-tracked 3-point shots Brandon attempted as a pick-and-roll ball handler, he converted at 39.8%.  For a team that will need to heavily rely on pick-and-roll plays to score in 2013-14, this could be the single most important spacing factor in the Pistons starting lineup.  Teams absolutely cannot sag off of Jennings during pick-and-rolls, and this will go a long way toward providing ample room for a clogged starting line.  If the offense is stagnant due to a lack of range at the 3 and 4, a well-executed pick-and-roll can be a two-way torch that will be incredibly challenging to defend for Detroit's opponent.

If the above isn't starting to sound familiar, allow me to make a very friendly comparison.  In terms of 3-point shooting, Brandon Jennings could very well remind Pistons fans of Chauncey Billups during the going to work years.

Their value as 3-point shooters is very similar.  Remember when Billups would slide off-the-ball on a series of possessions and let Prince, Hamilton or Detroit's backup point guard lead the possession?  Chauncey would move without the ball and spot-up for threes and do so very effectively.  Remember when Chauncey would run the floor in transition and stop on a dime at the 3-point line with plenty of time on the clock?  You could trust no other player in a Pistons jersey (especially you, Lindsey Hunter) to take a transition 3 with 20 seconds remaining on the shot clock...

...until Brandon Jennings.  Last season, Brandon shot 47.7% on 86 3-point shots in transition.  Like Chauncey, Jennings was often used off the ball next to Monta Ellis to spot-up for three point shots, which he did so very effectively (37% on 186 attempts).  Together, Jennings' ability to spot-up off-the-ball while Monroe or Smith distribute could add value for a team that so sorely needs spacing.  His ability to quickly and effectively pick up transition threes will be huge for outlet passes from Detroit's passing big men.  On pick-and-rolls, Jennings can be deadly if teams try to sag off to shut down a rolling man.  In total, there's a lot not to like about Brandon's individual offense.  There's also plenty to be excited about.

In part to dispel a continued comparison between Jennings and Billups, there is one thing that separates a guy like Billups from other, similar guards.  In Chauncey's prime years, you could expect to see him attempt one free throw for every two shot attempts.  It's hard to define how truly valuable that was.  By comparison, Brandon Jennings gets to the line less than once for every four shots.  For a guy that has been given so many shot attempts in his young career, he doesn't do a good enough job drawing contact and getting to the line.  This isn't something we can expect guys like Billups (or even Stuckey) to impart upon Jennings.  But beyond his shot selection, if there's any one thing I'd love to see Brandon improve this season it is his ability to get to the line.  No one who attempts more than 15 shots per game should get to the line less than 5 times per game.

In total, I expect to see more 3-point shots, less inside shot attempts and more assists.  I hope to see more free throw attempts.  If his playing time stays roughly the same, I think this is a fair expectation for Brandon Jennings in 2013-14.  I'll hope for even more.