On this day in Pistons history: Isiah Thomas makes his NBA debut

Future Hall of Famer Isiah Thomas made his NBA debut on October 30, 1981.

Share All sharing options for: On this day in Pistons history: Isiah Thomas makes his NBA debut

'Zeke' was a savior to a lifeless franchise that had won just 37 games the previous two seasons combined. (After winning only 16 games, the Pistons won just 21 the next year before Thomas' arrival. As a matter of perspective, the fewest number of Pistons wins in one of these past four excruciating seasons was 25.)

A few weeks after being drafted by Jack McCloskey No. 2 overall in the '81 draft, Thomas signed a four-year contract worth $1.6 million. Good bargain. Three months later, Thomas would play his first NBA game against the Milwaukee Bucks, his first of 979 regular seasons games that made up a Hall-of-Fame career. And it was crystal clear from the very start that he was the Pistons' point guard of the future (hereinafter "PGOTF" or also known as "Not Brandon Knight").

In his debut, the 20 year old dropped 31 points on 10 field goals and 10 freebies, and assisted 11 other buckets in a 118-113 Pistons win, which he orchestrated. Check out the old-school box from Basketball Reference: 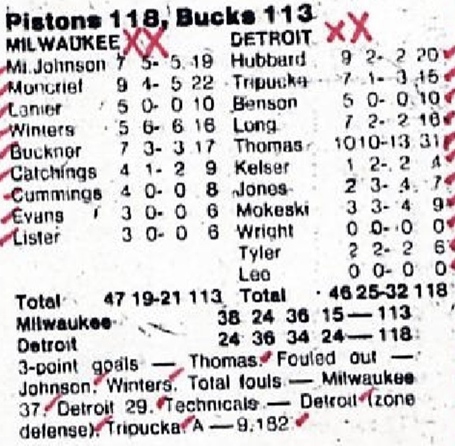 Thomas joined Oscar Robertson as the only other player to drop 20-plus points and dish out 10-plus assists in his NBA debut. (Damian Lillard became the third after his debut last season.) Thomas then went on to average 17 ppg and 7.8 apg his rookie year, earning him the first of 12 consecutive All-Star appearances and a spot on the All-Rookie Team (1st).

You know the rest.