The Pistons have played surprisingly awful defense thus far in the young season, despite a jumbo-sized frontcourt that should be among the most fearsome in the league. What gives? SB Nation's Mike Prada explains.

The following is an excerpt from Mike Prada's feature on SBNation.com explaining why the Pistons, Pelicans and Nets have struggled despite spending big in the offseason. I recommend reading the complete article, but feel free to discuss the Detroit bits here.

One could have expected Detroit's supersized frontcourt experiment to struggle offensively, but it's concerning that they have defended so poorly. Detroit has surrendered nearly 115 points per 100 possessions when Smith, Monroe and Drummond have shared the floor, and the normal starting 5 of those two, Brandon Jennings and Chauncey Billups has been particularly awful, allowing a whopping 131.1 points per 100 possessions.

The whole idea of the supersized frontcourt was to make up what it lacked in spacing with great interior defense, so what gives? Monroe's defense has never been excellent and has been especially problematic this year. Drummond has loads of potential, but still gets shoved around by bigger centers and has yet to master the art of positioning. Smith turned in an excellent defensive season in 2012-13, but his effort has lagged and he's not adjusted to playing on the wing well. Part of the problem is concentration, but part of it is also his natural instincts to protect the rim. It's causing him to leave his man wide open for appetizing treys like this. 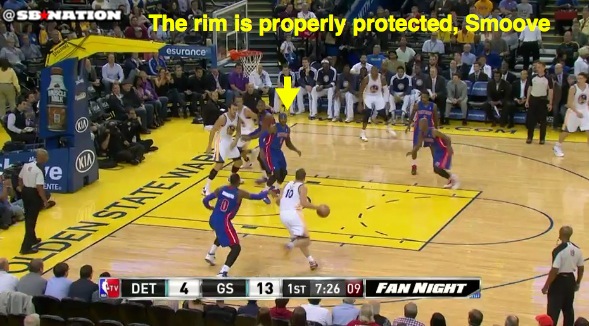 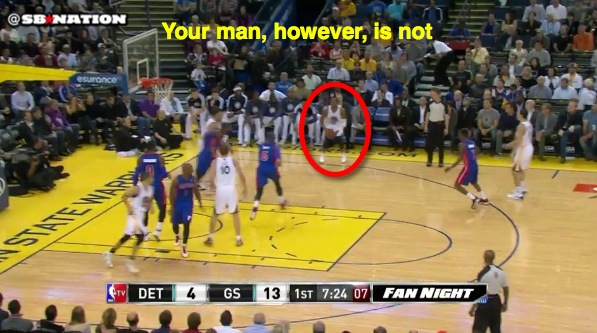 And Jennings' presence hasn't helped. It's early, but he's carried over all the bad habits he picked up in Milwaukee and then some. His shot selection has been especially poor early on, and it's hurt Detroit's transition defense because the floor is never properly balanced when Jennings fires away. This video only includes his wild jumpers that lead to transition opportunities; it doesn't even include his mad dashes to the rim that inevitably miss and leave him sprawled on the opposite baseline out of the play.

All this reflects in Jennings' plus/minus numbers. Seriously, look at the difference when you replace him with Will Bynum and keep the same other four regular starters in the game:

It's not all negative. A Smith/Drummond frontcourt without Monroe has shown a lot of defensive promise, allowing 96.2 points per 100 possessions in limited time together, per NBAWowy. On the other end, the Pistons have incorporated some Princeton-based motion and other sets to get Smith the ball on the block, and his passing has helped alleviated some spacing concerns. But Smith is also firing way too many threes, nullifying that impact, and the wing rotation is far from settled.

It's early, but there's clearly a lot to work through here. Maurice Cheeks has his work cut out for him given all the options at his disposal and the sketchy histories of Jennings and Smith.

Reminder: This was an excerpt from a longer feature that was originally published on SBNation.com.