Give Mo Cheeks credit, the Pistons offense should stink and it doesn't

Coach Cheeks has earned few fans in his first season, but it is time to give credit where credit is due.

Share All sharing options for: Give Mo Cheeks credit, the Pistons offense should stink and it doesn't

The Detroit Pistons are a disappointing 11-14 on the season and have let more than a few games slip beyond their grasp. And judging by comments in game threads, few Pistons fans believe that head coach Maurice Cheeks is capable of getting this team over the hump and into serious playoff contention.

But give the man some credit, by all accounts his players love him and despite some serious limitations with the lineup the Pistons are eeking out a competent offense on a nightly basis. How's it possible?

For three quarters, the Pistons looked like they might shock the Portland Trail Blazers, owners of the best record in the Western Conference. It didn't happen.

The short answer is Andre Drummond, but this is a blog and blogs are never interested in short answers. Let's dive a little deeper.

The Pistons are a decidedly mediocre team (15th in offensive efficiency). That might not sound like much, but consider the hand he has been dealt so far. The starting lineup features four players who weren't opening day starters last season. He also has a team trying to integrate eight new players in the lineup overall and has had to juggle various injury concerns with his back court rotation.

How do they accomplish this feat? They know what they're good at (one free-agent signing excepted), and try to exploit it to maximum effect. Behind Drummond and Greg Monroe, the Pistons are first in the league in points in the paint per game. They also rank fourth in steal percentage and sixth in fast-break points.

And while the Pistons rank near last in 3-point shooting, they still attempt nearly 20 per game -- and that's a good thing. That's because, as any analytic-inclined NBA observer would tell you, nine times out of 10, the worst thing a team can do is take a bunch of mid-range jump shots.

As detailed in this excellent piece by SB Nation's Tom Ziller, a high percentage of mid-range pretty much equals death to your offensive efficiency. I've reproduced his illuminating chart below: 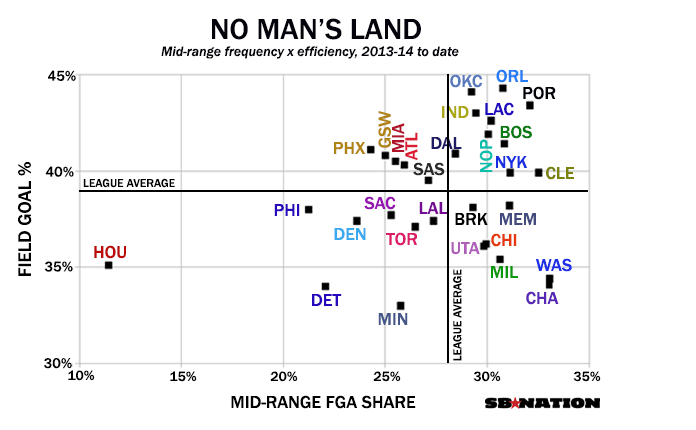 As you can see, the Pistons take the third-fewest mid-range shots as a share of overall field goal attempts in the league behind Philadelphia and WAY behind Daryl Morey's Houston Rockets. And those who both shoot many mid-range shots and shoot them poorly are among the league's worst offenses. But even shooting a high percentage on mid-range shots doesn't bode well for your offense overall -- teams such as Boston, Cleveland and Orlando are in the bottom seven in offense. In fact, just about the entire right side of the graph is a who's who of the NBA's worst offense (some notable exceptions excluded).

Coach Cheeks has emphasized high-percentage looks in the paint, running whenever possible and shooting 3s, and that is generally a recipe for success. If the Pistons could recalibrate Josh Smith's output to be more paint-focused (and the recent Portland game was an encouraging sign, albeit just one game) and other players can start hitting their career averages from deep, this team would feature a top-10 offense.

Another common criticism of Cheeks is his Xs and Os, or, more specifically, his lack thereof. He doesn't seem to be a creative play-caller, and he doesn't seem to be asking his point guards, especially Brandon Jennings, to crisply execute his well-plotted offensive sets.

Yet, there is evidence fans are not giving Cheeks the proper credit. According to an analysis at Deadspin, the Pistons are above average on both offense and defense coming out of timeouts compared to their usual performance.

Detroit's offense scores 94.9 points per 100 possessions out of timeouts compared to 85.6 in their typical half-court offense. Defensively, the Pistons allow 83.2 points per 100 possessions compared to 85.6 points in their typical half-court defense. The only teams to post positive improvement out of a timeout both offensively and defensively are Detroit, Charlotte, the Lakers and Timberwolves.

This is by no means homerism or an attempt to blindly look past problems. This team has a lot of work to do on both ends of the court and in maximizing its potential given its personnel. But in discussing the team and the man in charge, everyone must take into account the entire picture -- and that includes both the good and the bad.