Share All sharing options for: Is Josh Smith's low-post production here to stay?

Taking the Blazers to overtime and beating the Pacers in Indiana on consecutive nights is fun, but what makes those two games a potential turning point for the season was how they unfolded: namely, Josh Smith focusing on playing in the paint. From Vincent Goodwill of the Detroit News:

[Smith] attributes the change to finding his way on a new team.

"Pretty much," Smith said. "I played the backfield to see what was going on, where could I find my groove on this team and I just figured out I have to play my game and hopefully everybody can adjust."

As Sean noted yesterday, though, it wasn't just a happy accident. Rather, Mo Cheeks approached Smith about being more aggressive down low. From MLive.com's Brendan Savage:

"We talked about it," [Mo] Cheeks said, "putting the ball in his hands a little bit more and trying to get him off the perimeter ... to try and get him on the block a little bit more. Just give him a little more opportunity scoring wise

"I just looked at his numbers in Atlanta and figured out what I could do to get him better shots."

[...] "It's not like (getting Smith the ball low) wasn't a point of emphasis of before. We just did it a little bit more. It wasn't about their defenders or whatever. I made a concerted effort to put the ball in his hands a little bit more on the block and we did that.

"We had success with it and we'll continue with that."

It worked: after scoring more than 19 points just three times in his first 24 games, he scored 31 and 30 against Portland and Indiana -- and most importantly, he did so with efficiency. From SB Nation's Jason Patt:

Prior to the 111-109 overtime loss to the Blazers on Sunday, 54.0 percent of Smith's shots came from either mid-range or beyond the arc, according to NBA.com's stats page. Smith's shooting percentage on those shots? A woeful 25.4 percent.

Against the Blazers and Pacers, only 39.1 percent of Smith's shots came from those areas, according to NBA.com's stats page. Meanwhile, he went 10-of-11 in the restricted area and 19-of-28 in the paint. In the two games, he averaged 30.5 points and 7.0 rebounds while shooting 56.5 percent from the field.

It's easy to lump the two games together, but as you can see from his shot charts, they weren't quite the same -- part of me wonders if Smith was encouraged by his success Sunday (when he shot 12-18 from the field with four assists) and forced it a bit Monday (13-29 with just one assist). His performance Sunday against the Blazers on the left and Monday against the Pacers on the right (click to embiggen): 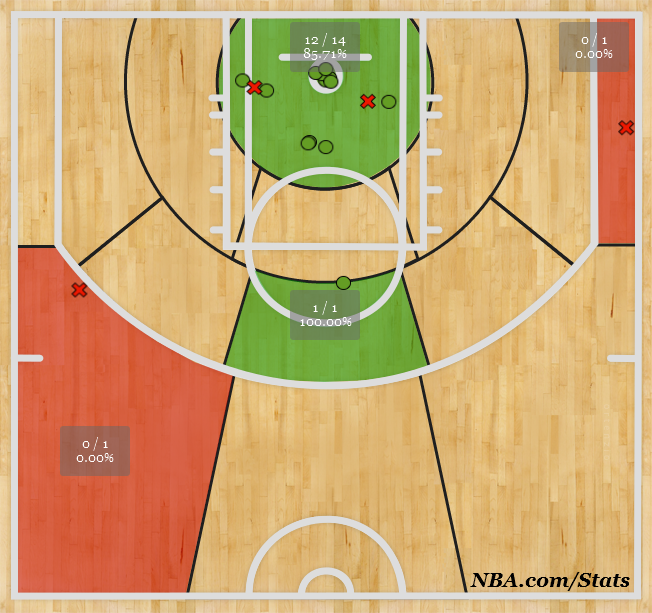 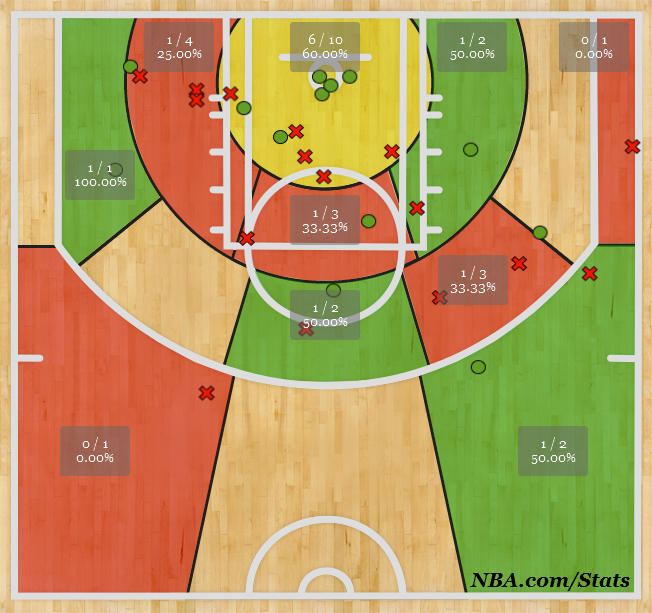 There were still too many long twos and midrange shots for my taste, but I hope we see a lot more games with 10 or more attempts near the rim.