A trade a day to brighten your holiday spirits. First up, the New York Knicks.

The holidays are fast approaching, and it seems as if the Pistons' four-year, $53 million signing of Josh Smith was a preemptive lump of coal in their stockings.

But with 20 days left until Christmas, Detroit Bad Boys would like to celebrate by its inaugural edition of the Trade Josh Smith Advent Calendar. First, a little background.

Modern-day advent calendars are a way to celebrate the coming of Christmas. They used to coincide with the beginning of Advent, but now mostly start on Dec. 1. For each day of the month, a person opens the small window representing that day and unwraps a small gift -- maybe a small toy, maybe a piece of chocolate.

But we dream bigger at Detroit Bad Boys, and here we will unwrap a fresh trade every day. Smith, of course, probably won't be traded, and even if he is he can't be dealt until Dec. 15. Also, all trades will feature just one team. Concocting multi-team trades is just masochism.

Also, while I will attempt to be as fair-minded in my trade for both teams, I might err on the side of seeming to favor the Smith receiver because I am hypersensitive to lopsided, homer trades as a rule. As Maurice Cheeks would say, "Nothing you can do about that."

Why the Knicks do it

The New York Knicks are a mess at a time when they can't really afford to be a mess. They have few avenues to improve and need to right the ship to ensure that Carmelo Anthony doesn't bolt in the offseason. The Stoudemire contract has been a medium-scale disaster in New York as he was signed to be a megastar but injuries have extremely limited his effectiveness.

The team has also seemed to sour on Iman Shumpert, who has been in trade rumors most of the season, and it seems to be affecting his play. A change of scenery seems to be in order.

Josh Smith is a big name that can make big plays that gets MSG excited again. The move also allows Smith to shift to power forward, where he is a much better defender. It allows the team to slide Andrea Bargnani into a reserve role or small forward at times where he can shoot perimeter shots all day and have less expectation of defending, rebounding, etc.

Detroit would be trading one mistake for a different, very expensive mistake. Honestly, Stoudemire wouldn't provide much, if anything. So he basically takes the place of both Jerebko and Villanueva. The salary implications mean a little temporary pain for some major financial gain. Stoudemire's $21 million salary essentially eliminates any salary cap flexibility Detroit has in 2014, presuming they pony up for Greg Monroe (they would). But the team would have huge flexibility in 2015 when Amare comes off the books. Depending on the cap outlook in the NBA, the Pistons would be able to invest in a nice complementary piece or two or fit the five-year max that Andre Drummond looks like he will earn.

The team, I would argue, would also improve in the 2013 season, and help solidify its playoff positioning in the weak Eastern Conference. Gone would be Smith and this shot profile: 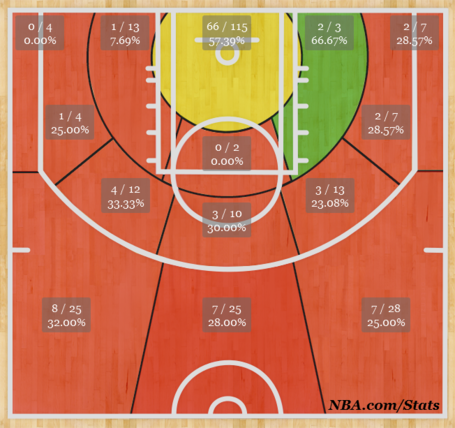 In his place at starting small forward would be Shumpert, who is a good perimeter defender who might not be an ace perimeter shooter, but he would be a vast improvement over Smith. Shumpert shot 40 percent on 127 attempts last season. He would vastly improve the team's perimeter D, and along with KCP at the shooting guard spot could turn that area into a strength as opposed to a weakness.

Hardaway Jr. is a Michigan grad and the Knicks reigning first-round pick. He's shot quite well during his first season and would represent a legitimate shooting threat off the Pistons' sad sack bench. Bringing Hardaway into the fold would allow Rodney Stuckey to be the reserve point guard who initiates the offense. The move would also open up the log jam at small forward and give both Luigi Datome and Tony Mitchell the chance to get some playing time.