Sports Illustrated with a great look at all the good and the bad of the remodeled Detroit Pistons.

Share All sharing options for: KCP having huge impact on Pistons' defense

There has been a lot to like and a lot to hate about the new-look Detroit Pistons so far this season -- with love and hate often falling on the same players for different reasons.

Brandon Jennings brought SWAG and the ability to dish. Love! Jennings takes an abundance of questionable shots and jumps in the air with no shot and nobody to pass to. Hate.

Josh Smith brought blocks, dunks, steals, and solid passing ability to the wing. Love! But he chucks 4.5 3-pointers per game, and will, literally, attempt just about any pass no matter how unlikely to reach its intended target. Hate.

Andre Drummond and Greg Monroe are monsters on the glass and are helping fuel the Pistons offensive dominance in the paint. Love. But both have struggled with defense, particularly some shockingly bad pick-and-roll coverage.

Rookie Kentavous Caldwell-Pope brings athleticism, energy, and defense to the starting lineup. Love! But his NBA range has been iffy and he's converting (until recently) at a low percentage when the team is desperate for a reliable perimeter threat. Hate.

Rob Mahoney of Sports Illustrated (h/t to Piston Powered) has a deeper dive into the Pistons grand experiment so far, and in it produces a shot chart that provides some startling clarity.

That is a look at how the defense has improved after swapping Chauncey Billups and KCP in the starting lineup. Needless to say, Caldwell-Pope has had a huge impact on this team's defense. Yes, it might have something to do with the level of competition, but the games seem increasingly less hectic and Piston defenders aren't scrambling so much to make up for coverage breakdowns on the perimeter.

Perhaps even more informative than the above, is the table produced by Dan Feldman at Piston Powered (Note: The table didn't want to embed and cannibalized huge chunks of my post so I took a screen cap. Head over to PP for insightful analysis and fancier technology). 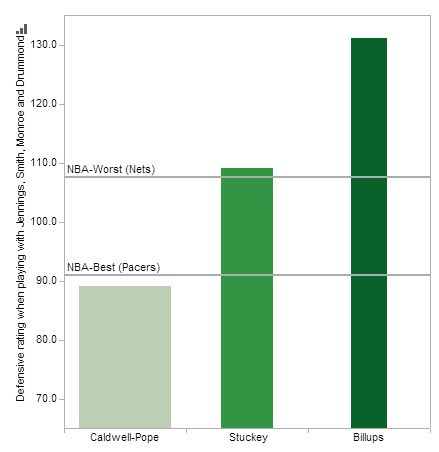 Again, caveats still apply. We're still talking about a team with plenty of defensive issues in the middle of a soft spot in the schedule. But the defensive improvement shouldn't go unnoticed.

And critically, as KCP has helped stabilize the team's earlier mass chaos of a defense, it has allowed the team to do what it does best -- gamble. This goes back to the earlier love/hate dichotomy of the team.

Two of the knocks against the Josh Smith and Brandon Jennings additions was their penchant to gamble for steals. Well, that gambling nature is still there, but a more set defense has enabled the team to turn a perceived weakness into a strength.

In the 10 games since the Pistons switched lineups and began dialing up the pressure on the perimeter, Drummond, Smith and Monroe have averaged a combined 5.5 steals per game. Detroit has cuffed its opponents by creating turnovers: Of the 25 lineups that have played 100 minutes or more this season, Detroit's new starting unit ranks third in points allowed per possession. With that group turning opponents over on 31.2 percent of their possessions, avoiding fouls at a remarkable rate and locking down the defensive glass to avoid giving away extra scoring opportunities, the Pistons have seemingly found a way to survive their own over-helping and inconsistent rotations. They've leaned into the gambling tendencies of players like Smith and Jennings, in a sense, and had enough success in doing so to both undercut opponents and fuel their own fast breaks.

Indeed, the attempts at pocket-picking have not only been less damaging when unsuccessful (because bigs are in better position in the paint), the success rate is increasing and that is allowing the offense to do what it does best -- get out and run.

The Pistons lead the NBA in steal percentage and are second in opponent turnover percentage. And when the opponent turns the ball over it is hard to stop the hard-charging collection of Smith, Jennings, Drummond and KCP all making a break for the hoop. Even Greg Monroe is getting in on the action:

Unsurprisingly, the team is fifth in fastbreak points per game, mostly behind teams that play at a much quicker pace.

KCP needs to continue bringing this stellar defense night in and night out, and combine that effort with a more consistent jumper (he's at 52 percent and 44 percent on 3s during the team's three-game win streak). And it looks like the tools are there for him to pull such a feat off.