The Kings new ownership showed this weekend that they are willing to add salary for talent and name recognition. Well, since you're in the market...

The holidays are fast approaching, and it seems as if the Pistons' four-year, $53 million signing of Josh Smith was a preemptive lump of coal in their stockings. But with 16 days left until Christmas, Detroit Bad Boys would like to celebrate with day 5 of the Trade Josh Smith Advent Calendar.

This doesn't mean we expect Josh Smith to be traded or benched anytime soon. It's just an exploration of possible deals with the various teams of the NBA if the Pistons decide the "big three" experiment just won't work. Consider it a little advanced recon. 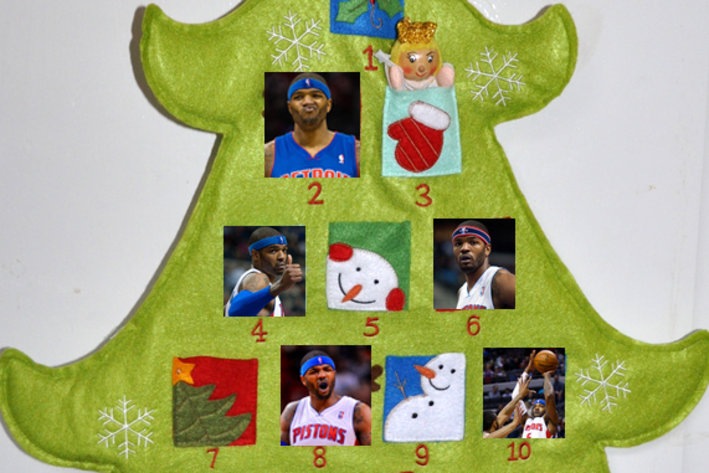 Why the Kings do it

For the same reason they traded for Rudy Gay. They want talent now and they're not afraid to take on salary to get it. It's really not that bad of a strategy - it seems to be working for the Washington Wizards. And with young players at key positions, there's room to round out the roster with high-salary veterans. Also as Tom Ziller pointed out, they may be looking at some additional factors to get an optimistic outlook on Gay - one that would similarly apply to Smith.

Additionally, their roster is still in flux. SB Nation's Sactown Royalty takes a look at the rotation, and there are more questions than answers. But both Thornton and Jimmer look thoroughly expendable, and there's no ideal solution at power forward. A frontcourt of Gay, Smith, and Cousins with Jason Thompson and Derrick Williams rounding out the depth just might be very attractive.

They might be concerned about the depth behind Thomas and McLemore. Well, the Pistons' roster is filled to the brim as it is. Fredette would likely be waived after the trade, allowing him to eventually make his way back to the Kings. Another possibility would be expanding the deal to include Will Bynum and Travis Outlaw.

It's time for this year's edition of the Annual Rodney Stuckey Injury Extravaganza! That was a fun run Rodney, but we all know how the story goes from here.

It's unsure how much time Stuckey will miss or how it will impact his play upon return, but some insurance would be helpful. It was clear in Sunday's loss to the Heat just now reliant the team's offense is on Stuckey's presence this year.

Both Thornton and Jimmer offer reliable, efficient shooters who can also help at point guard in a pinch. With Stuckey on the shelf and expiring at the end of the year, it wouldn't hurt to get a look at other options for Kentavious Caldwell-Pope's future backup.

Oh, they'll also save around $35 million.