Pistons were demolished in Indiana on Friday night, 114-82. Viacheslav Kravtsov was the best Piston with 14 points and 10 rebounds, his first career double double.

Look, the Pacers are playing Larry O'Brien basketball right now. In the month of February, they're averaging close to a near-best 104 points per game (not bad for a team near the bottom of the league overall) while holding opponents to ah-best 89. They've won eight of their last 10 and their last three wins are by an average margin of, ohhh, only THIRTY (30!) points. And Danny Granger still hasn't played a game this season.

Fresh off a 34-point beat down of the higher ranked Knicks on Wednesday, the 11 Pistons who decided to dress in uniform on Friday night presented a real laugher.

So funny, the Pistons' best player was the seldom-used Ukranian, rookie big man Viacheslav Kravtsov, who had his first career double double with 14 points and 10 rebounds in 29 minutes. He had as many defensive rebounds as he grabbed in his other 10 games played combined and was only three rebounds off his season total.

So funny, the Pistons trailed by 43 at one point.

So funny, a monkey was riding a doggy: 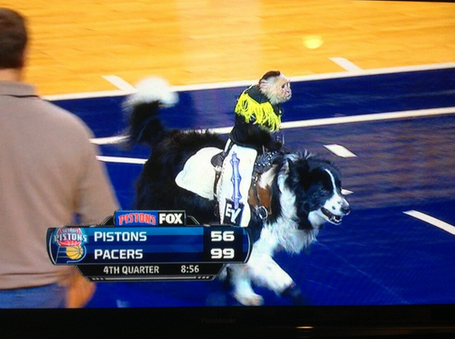 So funny, I FORGOT TO LAUGH.

/ends recap with a whimper

• Who's performing at halftime?