The Pistons and their illustrious history of stretch fours

The 'stretch four' is still a relatively new concept in the NBA, considering only a handful of teams were making good use of shooting big men in the 1990s. But the Pistons have always been among those pioneering teams.

Share All sharing options for: The Pistons and their illustrious history of stretch fours

Hello DBB, for those who don't know me from PistonPowered, from occasionally fighting with Mike Payne about Bill Laimbeer or taking thinly veiled (but mostly playful) shots at Wages of Wins in the comments here, I've been an obsessive Pistons blogger since the Michael Curry era (boy did I pick a great time to start), I'm a lifelong fan dating back to the Bad Boys, I'm a failed author, an inconsistent tweeter, an unapologetic Will Bynum fan and a Detroit Bad Boys guest poster in the pre-SB Nation days. Anyway, I recently wrote a story for SB Nation about the evolution of the stretch four, and because of the Pistons having a long history of using that particular role, Matt Watson asked if I'd be interested in doing a guest post for DBB. One thing I've learned in life -- you don't say no to Matt Watson.

Bill Laimbeer gave the Pistons one last gift before retiring -- he helped Terry Mills recognize the need to diversify his game to make himself more valuable to an NBA team.

"Bill really helped me develop as a player and encouraged me."-Terry Mills on Bill Laimbeer

"I got a chance to play with Bill, and he was one of the original big man shooters," said Mills, who is currently an assistant basketball coach at Henry Ford Community College in Dearborn. "He instilled in me that if I could hit that shot, it could be really effective for me and help me in my career. Bill really helped me develop as a player and encouraged me."

Prior to joining the Pistons, Mills was far from a failure as an NBA player, but he'd failed to stick with two franchises, the Denver Nuggets and New Jersey Nets. He played with Laimbeer, who also extended his range further and further throughout his career, during Laimbeer's last two seasons in the league. Mills said getting the opportunity to play with not only Laimbeer but also smart, winning players like Isiah Thomas and Joe Dumars helped him find his niche in the league.

But in our interview, Mills also pointed out another thread that hadn't really occurred to me when researching the story -- shooting big men have been a staple of Pistons teams for a while now, from Laimbeer, to Mills, to Cliff Robinson, to Rasheed Wallace, to (with ... uh ... a tad less success) Charlie Villanueva.

"It was kind of funny in Detroit, because first you had Bill, then you had me as a big guy who could shoot threes in the 90s, then I left and pretty soon here comes Rasheed Wallace, so it seems like the Pistons have always had a big guy like that who can shoot," Mills said.

"It was a win-win for us, because a big guy switching on Grant Hill was a big advantage." -Terry Mills on adapting on his game

Mills also credited both Doug Collins and Grant Hill for helping his three-point shot evolve. Collins took over as Pistons coach in the 1995-96 season, and quickly saw the value of getting players out from underneath the basket so that Hill could have more space to operate.

"It really just happened for me -- we had a new coach, I was asked to play a new role and if you want to play in the NBA, one of the keys is being able to adapt," Mills said. "I really started using that shot when Doug Collins took over as coach of the Pistons, he wanted to use me as more of a specialist in pick and rolls with Grant Hill. It was a win-win for us, because a big guy switching on Grant Hill was a big advantage."

Although Mills is a pioneer among perimeter-happy big men, he also never necessarily considered himself a specialist. Unlike many of the stretch fours in today's game, Mills was a productive rebounder, grabbing 8.1 per game for his career.

"It was always my goal to let people know that I could also go inside and bang and be physical too," Mills said.

Robinson also noted that he didn't embrace that role as a shooting specialist until very late in his career, noting that along with his shooting touch, he also had more than 1,000 steals and 1,000 blocks in his career, too. 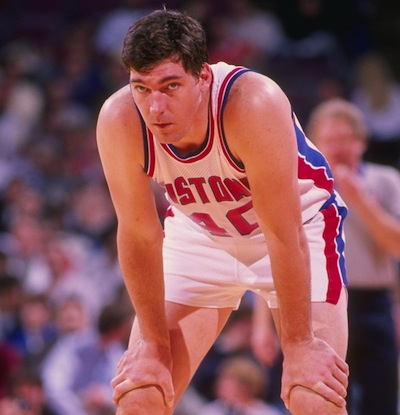 Talking with perimeter-oriented big men of the 90s and the today about the evolution of their position.

"By the end of my career, that's what I was doing -- mostly just spotting up, so that's what people tend to remember," said Robinson, who spent his last three seasons in the league playing for current Pistons coach Lawrence Frank. "I was put in a position where my primary role is to open up the floor and I didn't get the same opportunities around the basket (that I used to)."

Interestingly, both players specifically mentioned a tall shooter in today's game whom they love watching -- Kevin Durant. Durant's game is so perimeter-oriented that most people don't realize he's 6-foot-9 and may not have had the same opportunities to be a wing player at his height in eras where basketball positions were more strictly defined.

"For a guy his (Durant's) size to do what he can do, he's really fun to watch," Robinson said.

Mills compared Durant to a similarly tall, versatile player in the 1990s.

"A guy like Toni Kukoc when I was playing -- that European style," Mills said. "He was 6-9, but he could put it on the floor, he could shoot. You're starting to see that more and more with big guys. Kevin Durant for example. They let big men know that your game doesn't have to be limited."

Check out the full story here