UPDATE: Pistons to pick in No. 8 spot in NBA Draft

Start boning up on Shabazz Muhammad, CJ McCollum, Michael Carter-Williams, Cody Zeller and Kentavious Caldwell-Pope because the Pistons got screwed again. We can all officially share in our hatred of the Cavs, Wizards and Kings now.

Share All sharing options for: UPDATE: Pistons to pick in No. 8 spot in NBA Draft

UPDATE: The draft lottery happened and it was miserable. Not only did the Pistons fail to jump into the top 3, Detroit was leapfrogged by The Washington Wizards. The same Wizards team that tied with Detroit and had to flip a coin to configure lottery odds. Detroit "won" that toss. Oh, also, the Cleveland Cavaliers are picking first AGAIN.

Enjoy the below article from a time when we were all full of hope, a little younger and a little more naive.

The Detroit Pistons are currently in the seventh position of the 2013 NBA Draft but tonight their fortunes could change for better or worse. The NBA Draft Lottery gives the Pistons a 3.6 percent chance of winning the No. 1 pick. Lets say there is some magic in that lottery machine tonight and the Pistons win the first pick. Now lets say you're in charge. Whom do you select?

Sounds like a great poll question to me. One option that won't be available, sadly, is trading the pick. Why? Because trades are really hard to pull off and when we're living in a hypothetical reality people tend to imagine fantastic trades for their favorite team. Instead we have to deal with the cold, hard reality of the five or six players people seem to really like at the top of this draft class. 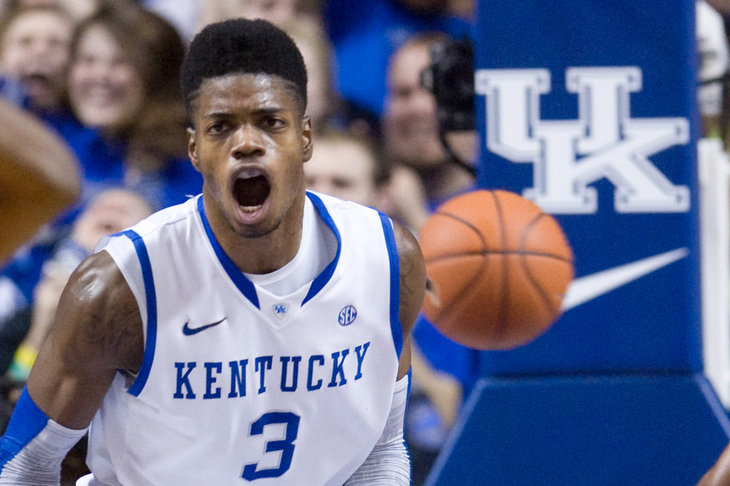 The DBB staff dissects Nerlens Noel and how he fits with the Pistons.

Why he fits with the Pistons (via Kevin Sawyer):

Defense. Lot's of it. Noel's defensive numbers are off the charts against top tier competition. He easily led prospects in block rate, and is top three in terms of steals. And he did it without fouling at a particularly high rate. He has the potential to be a once-in-a-decade defensive talent. Those only come along once per decade!

Why he doesn't fit with the Pistons (via Mike Payne):

Obviously, he has a pretty remarkable talent. However, he doesn't fill a need in Detroit, he's already torn his ACL and it may take several years before he has the mass to man the NBA five. If Detroit didn't have Andre Drummond, he'd be a lot more attractive. 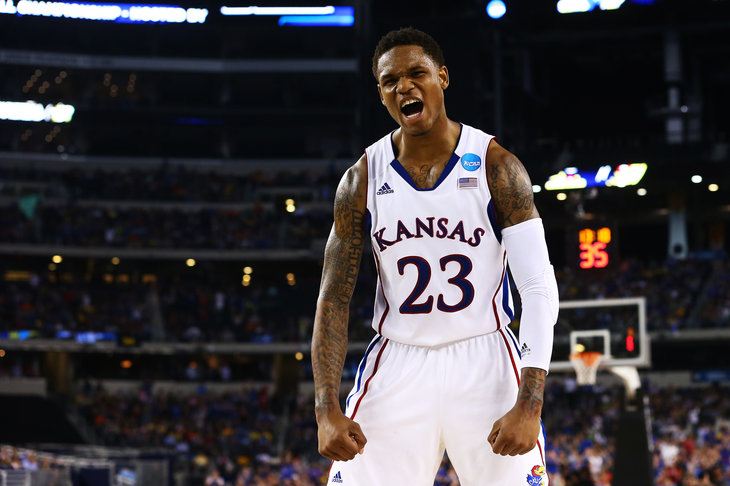 The DBB staff dissects Ben McLemore and how he fits with the Pistons.

Why he fits with the Pistons (via Sean Corp):

Elite shooting. Efficient scoring. Just what the doctor ordered. Dude shot nearly 50 percent while taking 400 shots on the season. And his coach and teammates thought he was too tentative. In a lot of ways I feel like he is one of the more underrated No. 2 overall picks in recent years only because I think he is going to improve by leaps and bounds as he matures and gets more confident in his game.

Why he doesn't fit with the Pistons (via Shinons*):

Really, I'm probably the least enthused about McLemore. He's a scorer, that's it. Which would be fine if he were at least a prolific scorer - and he's actually barely more prolific than Oladipo this year. He disappears, isn't aggressive enough. So isn't he just a shooting guard version of Cody Zeller? 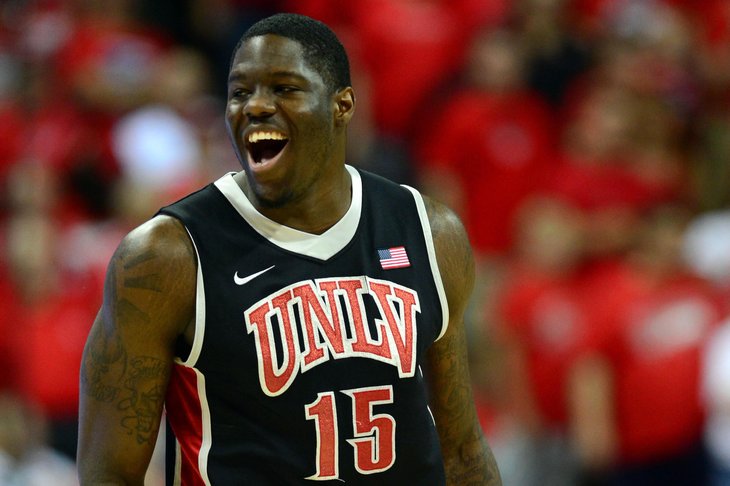 The DBB staff dissects Anthony Bennett and how he fits with the Pistons.

Why he fits with the Pistons (via Kevin Sawyer):

A little bit of everything, and a lot of nothing. Bennett was a reasonably efficient shooter and a fairly prolific scorer. His rebounding rate was reasonable for his position, and his defensive stats project solidly, and he has decent range. The latter attribute gives him the potential to create matchup problems. He fits the mold of a stretch four, which is still en vogue in the NBA, I guess.

Why he doesn't fit with the Pistons (via Shinons*):

I don't like him. He feels like Charlie Villanueva, Michael Beasley, or Derrick Williams. Guys like him just never wind up being all that valuable. They tend to be defensive liabilities, not having the fluidity or ball-handling ability to use their athleticism to their advantage offensively, and just turn into shooters - yet not as good of shooters as a prospect who is a "pure shooter." In short, I'd take Erik Murphy ahead of him. 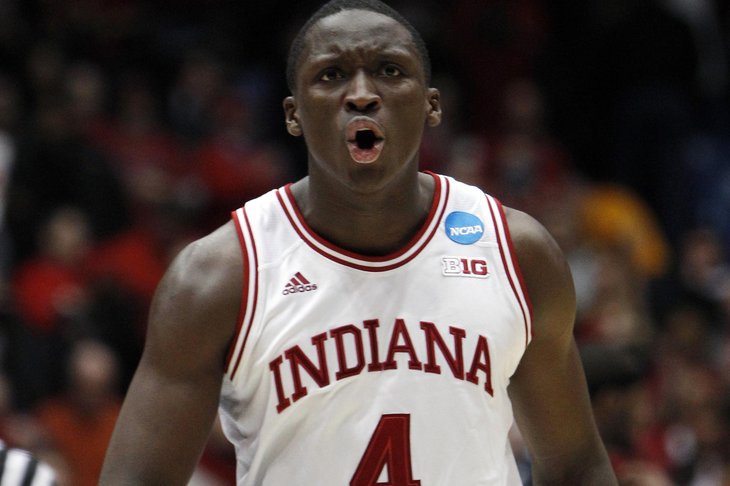 The DBB staff dissects Victor Oladipo and how he fits with the Pistons.

Why he fits with the Pistons (via Mike Payne):

Efficient scoring from a wing player. Defense. Incredible nickname versatility. Victor Oladipo can potentially bring to Detroit nearly everything it needs from an off-the-ball wing player.

Why he doesn't fit with the Pistons (via Sean Corp):

His 3-point shooting. In his first two seasons at Indiana, Oladipo shot 30 percent and 20 percent, respectively. That suddenly shot up to 44 percent last season. Was it a blip or a new normal?

Why he fits with the Pistons:

Burke is the national college player of the year and he earned the award based on production not reputation. He has great court vision and natural point guard instincts, but more than that he has a feel for how to navigate through defenses with the ball. He might not be a great athlete but he knows how to move and how to shake a defender. He is effective despite having not nearly the natural speed of, say, Brandon Knight to sight just one example totally at random.

Why he doesn't fit with the Pistons:

While Burke is a natural point guard if you draft him I'm not sure you can convince Jose Calderon to return to the team. And if Burke struggles out of the gate that means the Pistons are yet again relying on Brandon Knight or Rodney Stuckey to man the point position. That doesn't seem like a recipe for the kind of improvement the team expects to see.

Why he fits with the Pistons:

He is like a swiss army knife. He provides a little of everything. He can shoot with range, he can cut to the basket, he can shoot the mid-range jumper. He's got a great combination of size, scoring skill and defensive awareness.

Why he doesn't fit with the Pistons:

He nearly doubled his 3-point percentage from his freshman to sophomore season. Can the new numbers be trusted? If he doesn't come to the NBA with a lights-out perimeter game then it will make the rest of his repertoire that much less effective.