It is still unclear whether Detroit is a realistic destination for Andre Iguodala to sign, but his versatility, defensive acumen, and value as an asset going forward should make him the Pistons' primary target in free agency.

Share All sharing options for: Counterpoint: The Pistons should pursue Andre Iguodala

With Andre Iguodala opting out of the final year of his contract and a relative dearth of suitors with cap space, it's within the realm of possibility that Iguodala could be wearing a Pistons uniform next season. Mike Payne wrote a well-worded, reasonably argued piece on why Detroit shouldn't pursue him, but I'm still not convinced. Iguodala's versatility, defensive impact, and value as a tradeable asset -- as well as a few lesser factors -- would make him a great piece to help Detroit rebuild.

Iguodala was -- by many metrics -- Denver's most important and effective player, despite not playing at his most effective position for most of the season. The Nuggets, because of Danilo Gallinari's value and a relative lack of options, were forced to play Iguodala at shooting guard for most of the season, rather than at his natural position. After Gallinari went down with an ACL injury, and Iguodala was shifted back to the three, he had arguably his best stretch of the entire season. In the six games after Gallinari went down -- a small sample size, admittedly -- Iguodala averaged 18 points, 7.5 boards, and 8.5 assists on 54/41.7/56.5 shooting splits. 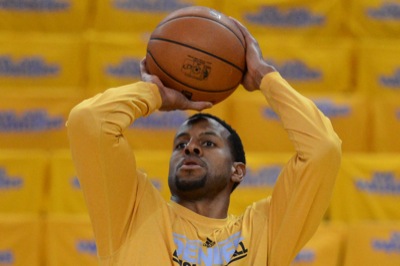 Conveniently, the Pistons' two biggest holes right now are at small forward and shooting guard. Iguodala would fill a gaping need at the three, which would be an absolutely massive upgrade over last year's aged Tayshaun Prince/Kyle Singler combo. He'd limit the amount of minutes Detroit would have to play Rodney Stuckey, and provide a reliable alternative to the unproven (if talented) Kim English, who would likely be forced into the rotation.

One intriguing lineup possibility, in particular, stands out with Iggy hypothetically in the fold. Playing him and Brandon Knight together -- with Knight at point guard and Iguodala at either the two or three -- would allow Knight to play off ball offensively with Iguodala running the offense, while also allowing Knight to defend point guards. The defensive potential of that type of lineup (especially with, say, Victor Oladipo or Kentavious Caldwell-Pope at the two and Andre Drummond protecting the rim) is enormous, and inserting a stretch four into the mix could make things even more devastating.

Iguodala turned the Denver Nuggets from a below-average defensive team into an above-average-to-good one in one season. The Nuggets finished the season just outside the top 10 in defensive efficiency -- as "just outside" as you can be, since they ended ranked 11th. When Iguodala saw the court, they allowed over four fewer points per hundred possessions, while their fifth ranked offense didn't take a hit (and was actually just under a point better with him on the court).

Since the league's rule changes on hand-checking, impact perimeter defenders have become something of a rarity and, as such, a valuable commodity. Iguodala is the guy when it comes to perimeter defense. He allowed an absolutely astonishing 0.53 points per possession as an isolation defender last season -- better than LeBron James, Paul George, Tony Allen, Avery Bradley, Luol Deng, and Kawhi Leonard, just to name a few -- despite consistently guarding the opposing team's best offensive players.

Pairing Iguodala's defensive acumen with Andre Drummond's absurd quickness and rim-protection has absolutely explosive potential. Drummond is much quicker than Kosta Koufos, and already has a much higher basketball IQ than JaVale McGee -- the two guys protecting the rim for Iguodala in Denver -- and his defensive potential is almost limitless. The Pistons could go from a bottom-third defensive team to a top ten one almost overnight.

This is Not Another Ben Gordon/Charlie Villanueva Situation

It's tempting to draw comparisons between this type of signing and Detroit's disastrous 2009 offseason. It's also a mistake to do so, as it ignores most of the context involved. In 2009, the Pistons gave eight figures to a volume scorer so he could back up another shooting guard who was, himself, signed long-term making eight figures. This mistake was compounded by signing a potential breakout stretch four coming off a contract year that was significantly better than his previous production. Both guys got five-year deals. No need to dwell on the resulting malaise.

Unlike that offseason, the Pistons do not have currently have a player making more than $8.5 million (Tayshaun Prince and Rip Hamilton were both making $10-11 million a year). Even more conveniently, the two contracts in question expire after the 2013-2014 season. The only salary commitments Detroit has after that are to Greg Monroe, Andre Drummond, Brandon Knight, Jonas Jerebko, Kyle Singler, and Khris Middleton. Jerebko would be the highest paid player of that group, at an eminently reasonable $4.5 million. Ideally, Greg Monroe will get a contract extension by then, which would easily push him past Jerebko, but there's not a bad contract to be seen there -- extension or no extension.

Iguodala Has Played For Cheeks

Iguodala's most efficient offensive seasons came under Maurice Cheeks. He went from a .550 TS%-a-year player under Cheeks to a sub-.550 one after Cheeks' departure in 2009. Unsurprisingly, this decline coincided with the arrival of Doug Collins and his "everyone shoot long twos!" offense in Philadelphia.

Extraneous factors may be the real culprit for that change in efficiency, but if Cheeks coaching Iguodala doesn't necessarily impact the latter, it almost certainly impacts the former. Cheeks is arriving in Detroit to a roster of players he's never coached before. Hell, half the roster weren't even in the league the last time Mo had a coaching gig. Regardless of whether Cheeks was the right hire, it's already happened. The focus now needs to be setting him up to be as successful as possible, and giving him even one familiar element during his transition would positively impact his chances of success in Detroit.

This argument could be entirely moot. Iguodala may choose to sign with any number of teams that aren't the Pistons. Dallas might be a more attractive option, or Houston, or wherever. Regardless of where he lands, I stand firm in the belief that he makes sense in both a short-term and long-term context for the Pistons' rebuild and is more than worth whatever money he demands.