There will be plenty of Pistons fans - including me - who will wonder why Joe Dumars didn't select a point guard, like hometown favorite Trey Burke. This year, the stats suggest that Joe Dumars has made a very savvy selection.

As a Michigan Wolverines fan, my heart wanted Trey Burke, badly (more than a single tear badly), but my head tells me to have some hope that Caldwell-Pope (KCP) can bring quite of bit of what the Pistons need. The stats agree - surprisingly, given Dumars' draft history.

First, here's a quick look at his box score stats, courtesy of DraftExpress:

Notably, KCP is a rapidly improving shooter, particularly from deep. As a freshman, KCP shot a meager 30.4% from deep, while launching 6.7 per game. Clearly, he's not scared. As a sophomore, that percentage jumped to nearly 38%on 7 attempts flat. He's also a plus 50% two-point shooter for consecutive seasons, which is suggestive that his three point improvement isn't a fluke. And he managed that hike in efficiency while seeing a proportional uptick in usage; as a sophomore, he used nearly 28% of his team's possessions. That is very encouraging.

He's also solid on the defensive glass, and his two steals per game suggest that he can shore up the shoddy Pistons' perimeter defense.

Looking at the advanced stats, he was third overall on the Wages of Wins draft board. The rebounding, steals, and good shooting efficiency are certainly helping there. A Wins Produced per 48 minutes of .122 is projected, and that makes him the most productive Pistons' guard on the payroll if it holds up. 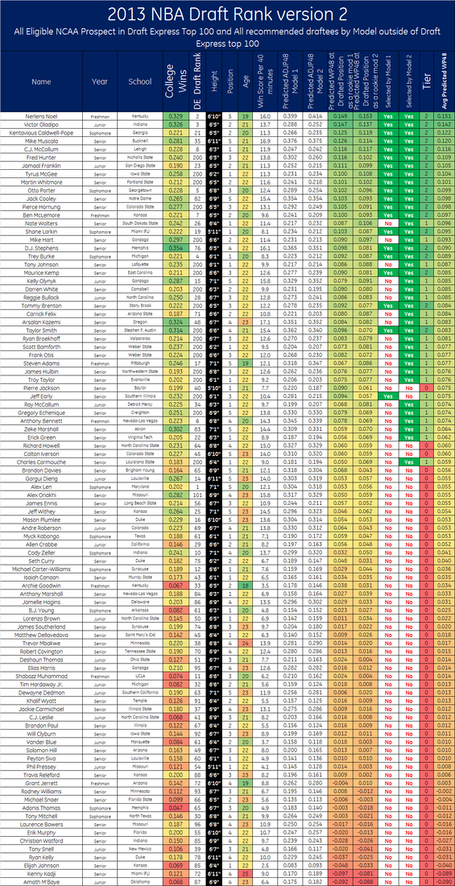 And James Brocato's draft rating tends to agree. James' model rates him as +1.2 and fifth overall on his draft board. For context, a +1 player projects as highly likely to become a solid rotation player, and a +2 player projects as highly likely to put up All Star numbers. That's in line with the Wins Produced projection above - better than average, which is better than what the Pistons have, but not an immediate All Star.

I'm officially on the KCP bandwagon. Hop on! There's lots of room.