Stop me if you've heard this one before. Pistons have been linked to Josh Smith for years, including before Greg Monroe and Andre Drummond stepped foot inside the Palace. Hard to know if this is a legacy association or fresh interest.

Smith and the Pistons have long been associated with one another as Detroit has been coveting the defensive big man seemingly since he entered the league.

That is the only reason I'm not quite ready to jump off the bridge with this latest news. Maybe people just can't accept the fact that Smith to the Pistons no longer really makes sense.

With Andre Drummond and Greg Monroe locked up on cheap, rookie deals and set to man the center and power forward positions for the next 5-10 years Smith doesn't really fit.

There was one time when people viewed Smith as a hybrid forward, strong and athletic enough to defend the power forward post and quick enough to D up small forwards as well. But that is no longer the case.

The 27-year-old has never developed an adequate jump shot, which would be fine if he wasn't still taking way too many jumpers ever year.

Just under half of all of his shots came outside of eight feet last season and he converted at a below league-average rate. 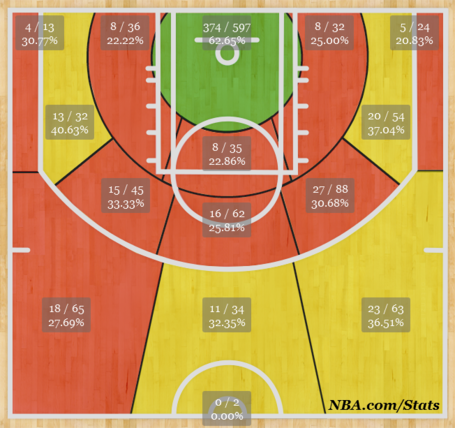 Needless to say, that does not seem like a great complement to Drummond. And if Smith is incapable of playing small forward that means the Pistons would then be shipping out Greg Monroe, which, just ... no. No. No, no, no, no.

Again, I'm inherently skeptical of all rumors linking Josh Smith to the Detroit Pistons because I think while it was true at one time it is no longer the case. And if Dumars does sign Smith, then I think we'll be pining for the days when we thought he was only going to overpay Andre Iguodala.