The Pistons will open Orlando Summer League action on Sunday, July 7 against the Brooklyn Nets.

We take a break in free agency (in)action to remind you that Orlando Summer League is rapidly approaching.

Players will begin reporting to Orlando within the next couple of days for practices leading up to the games, which begin on Sunday, July 7. The Pistons tip off at 5 p.m. ET against the Brooklyn Nets and will, in all, play five games in six days.

While the Pistons have not officially announced their roster yet, Keith Langlois tweeted a lineup a day after the NBA Draft:

Langlois went on to say that the Pistons would add a couple summer leaguers who do not have a legitimate shot at making the team, but would be recognizable names.

On Monday, Alex Kennedy tweeted that undrafted free agent Korie Lucious will play with the Pistons. Lucious, a point guard, is semi-famous amongst Michigan State fans for hitting a buzzer-beating three pointer against Maryland in the second round of the 2010 NCAA Tournament. He was suspended from the team the next season for conduct detrimental to the team and then transferred to Iowa State. Here are his college numbers.

The full Orlando Summer League schedule is below, courtesy of NBA.com (click to enlarge): 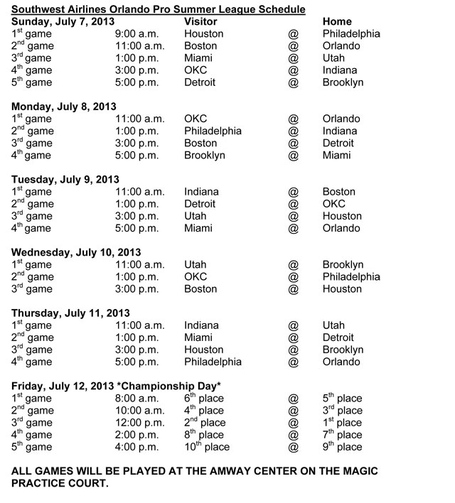 We will have much more on summer league when the time comes. Stay tuned, because you will not want to miss it.