Salary cap poised for big bump: Why Pistons have plenty of room for Smith, Monroe, Drummond

While people question whether Josh Smith fits on Pistons, many are also concerned team can't afford to pay big bucks to three big men. Here is why they're wrong.

Share All sharing options for: Salary cap poised for big bump: Why Pistons have plenty of room for Smith, Monroe, Drummond

The Detroit Pistons caused a mix of heartburn and excitement when they signed forward Josh Smith away from the Atlanta Hawks for four years and $54 million. The deal was the richest in Pistons history and Smith is the highest profile player to wear the uniform since Ben Wallace and Chauncey Billups were in their primes.

In a vacuum it is a quality deal. Smith has pluses and minuses in his game but he is fairly paid based on his previous production and the fact that Smith should still be in his prime by the time the contract is wrapping up. 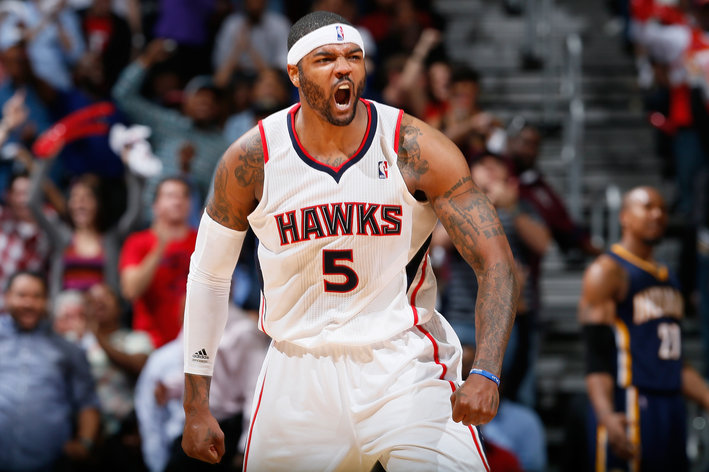 But deals don't exist in a vacuum. And the Smith deal presents some challenges. The first is figuring out how to fit Smith into the established young core of the Pistons -- Greg Monroe and Andre Drummond. The second is whether the team is going to be able to afford to hand a player $13.5 million a year with contract extensions looming for Monroe and then Drummond.

If the team can't afford to keep all three the most likely to be dealt would probably be Monroe and that should make any Pistons fan sad. Monroe has been a terrific player in his first three seasons and is still young and likely to improve the weak areas of his game -- establishing a legit jumper, limiting turnovers and improved defense.

If you were to trade away a 16 and 10 big man who is also a great passer and someone who generates steals it would be difficult to get commensurate value in return. And that has many fans worried. But that worry is overblown.

Not that worry isn't understandable. The NBA operates under a salary cap and under the new collective bargaining agreement going over the cap is especially punitive. I don't imagine that Detroit will be going into luxury tax territory anytime soon. And if a team like Detroit needs to stay near the salary cap (you can go slightly over without having to pay a tax), then staying flexible and continuing to add talent to your team becomes difficult.

And the salary cap hasn't moved much for years.

As you can see the salary cap is the same this season as it was in 2008-09 and has only risen $5 million since 06-07. But that could change in a big way as early as next season and will most definitely have seen a dramatic rise by the time Drummond is ready to sign a max extension with the Pistons.

A new era for sports

Why is a salary cap that has been stagnant for years suddenly ready to jump several million dollars? For that you can thank your DVR.

Half of TV viewers watch scripted TV on DVR and viewership in general has been dwindling as more and more channels embrace niche audiences. And that has placed a big premium on live events, especially sports, which has a committed audience of diehards that don't DVR because that runs the risk of finding out who won or lost before you get a chance to watch. Advertisers love people who watch live TV because they don't skip their very expensive ads.

There is also an explosion of standalone sports networks and they are all fighting each other for content. Nationally, you have the juggernaut known as ESPN but recently we've also seen the launch of the NBC Sports Network, CBS Sports Network and the soon to launch Fox Sports 1 as well as basic cable trying to get in on the sports game including TBS and longtime NBA home TNT.

Sports also feature a desirable demographic, and that is especially true for the NBA whose audience skews even younger than the NFL or MLB. Already we've seen MLB double its media deal to $12.6 billion and the NFL negotiated a 60 percent bump.

Wanting to strike while sports media rights are hot, the NBA is starting informal talks in an effort to renegotiate its TV deal. The current $930 million deal is set to expire after the 2015-16 season.

If the league doubles its TV rights deal similar to MLB then each team will get an instant payout of $60 million, which already exceeds this year's salary cap.

And outgoing commissioner David Stern reportedly is confident the league can double its TV deal much like Major League Baseball did. And looking at recent history of baseball most of that additional money will go directly to teams.

According to a great post at Awful Announcing, the MLB handed out $25 million to each team based on its previous TV deal and that will rise to $50 million next season. MLB, much like the NBA, also has a revenue sharing scheme in place and that Awful Announcing post goes in great detail to show how each team will receive a bigger piece of the TV money pie thanks to the giant independent TV deals signed by the Yankees, Dodgers and others.

So what does that mean for the NBA?

According to Sports Business Daily, each NBA team currently receives $30 million as its share of the league's TV deal. If the league doubles its TV rights deal similar to MLB then each team will get an instant payout of $60 million, which already exceeds this year's salary cap.

Can we really expect the salary cap to essentially double over the course of one season? No, that's probably not realistic. But a significant portion of that new revenue stream will go toward raising the salary cap because, well, it has to.

Unlike MLB teams cannot pocket all this extra cash. The latest collective bargaining agreement calls for teams to spend roughly half of basketball-related income (BRI) on team payroll. That's down from 57 in the previous CBA.

Also remember that the NBA instituted a more expansive version of revenue sharing between the high-revenue juggernauts such as the Lakers, Bulls, Celtics and Knicks of the world to share with the Bobcats, Bucks, Timberwolves, and, yes, probably the Pistons.

Again turning to Sports Business Daily, league projections say that the neediest teams in the league could count on as much as an additional $16 million in revenue based on revenue sharing once the system is completely in place.

With the robust revenue sharing plan in place, the Pistons should be able to withstand another season or two of light attendance at the Palace, and with new owner Tom Gores' deep pockets there is no indication the team will not spend up to the spending cap.

And with that in mind the team's fiscal picture looks pretty good. Currently, the team has only $36.8 million committed to payroll next season. Even if you factor in an $8 million pay bump to Greg Monroe that number stands at just under $45 million committed to 13 players. The team could save roughly $2.7 million and open up two roster spots by not bringing back Slava Kravtsov or Khris Middelton.

So don't worry about the money, everyone. While the league hasn't seen a big jump in the salary cap in years that is poised to change and change in a big way. That leaves Josh Smith to do his shot-blocking, defensive-minded thing, Greg Monroe to grow into a multi-faceted offensive mainstay and All-Star and Drummond to become the game-changing defensive franchise player that his talent indicates he could be.