Both fanbases can now step away from the ESPN Trade Machine.

Chris Broussard took to Twitter and reported that the Toronto Raptors "are not looking to get rid of Rudy Gay and his contract."

Lets back up for a moment. The Detroit Pistons reportedly offered the expiring contracts of Charlie Villanueva and Rodney Stuckey in exchange for the two years and $37 million left on Gay's deal (the final year of his contract is a player option). 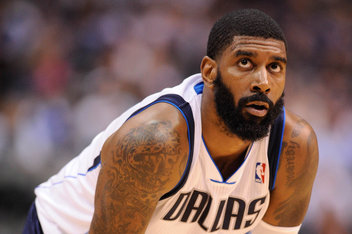 Read all the latest news about who the Pistons are chasing in free agency.

Toronto reportedly viewed that offer as a "lowball" and now we are hear that Gay isn't on the block. Just posturing or legitimate?

I'm inclined to say legitimate. There were never any hints that Gay could be on the block other than speculation based on a couple of factors -- 1. Rudy Gay is moderately good but exorbitantly paid 2. The Raptors have a new GM in town with an analytics bent so he probably realizes how little Gay actually produces, and 3. There is going to be a tankapalooza heading into the 2014 NBA Draft, which is absolutely stacked (including a bona fide Canadian).

Pistons fans sort of took that ball and ran with it knowing two things themselves, 1. Joe Dumars has long admired and tried to acquire Rudy Gay, and 2. Overpaying a small forward for two years is preferable to overpaying Josh Smith or Andre Iguodala for four years.

So as currently constructed the deal just sending expirings for Gay won't get it done. Does that mean the Pistons should walk away or is it worth sweetening the pot a little?

And by sweet I don't mean a future first-round draft pick. I just don't think Gay produces at a level worth a first-rounder. But if we want to close the book on the Brandon Knight era I might still consider it.

With Greg Monroe and Andre Drummond obviously off the table, the only other option would be to take back more salary from Toronto so they can do a complete rebuild. So who's still under contract?

DeMar Derozan just received a monster contract that will pay him $9.5 million until 2017 and Landry Fields is somehow making $6 million for each of the next two years. The best of the bunch is Amir Johnson, but the former Piston is probably too valuable and reasonably paid to be in the discussion.

So is this deal that never really was dead or is this just the beginning?