In signing Josh Smith, Joe Dumars has repeated the failed free agent strategy that cursed the Detroit Pistons in 2009. It is the third significant free agent purse Joe Dumars has spent in four years, with each of them costing the team dearly.

Ladies and gentlemen, your 2009 Joe Dumars. In a move reminiscent of the 2009 signing of Ben Gordon, Joe Dumars has reached an agreement with free agent power forward Josh Smith of the Atlanta Hawks. Smith is a fine player, but possibly the worst free agent fit for the Detroit Pistons, in a scenario that echoes that free agent failings of Joe Dumars' past. This time, the stakes are higher-- a young, promising nucleus must now deal with the same struggles that torpedoed the Going to Work era into the basement of the league. This could be very bad, Pistons fans.

Four years ago, the Chicago Bulls parted ways with Ben Gordon and did not compete for a chance to keep him in Chicago. Outside of the Bulls, few if any teams actively bid for Gordon's services. He was a gifted player, no doubt, but his skills were suited to one end of the court and not the other. Gordon's weaknesses were well pronounced, and his next team would have to bear this burden by assembling the proper compliments around him.

The same is true of Josh Smith in 2013. Instead of keeping the 27-year-old Smith, the Hawks opted for the 28-year-old Paul Millsap on a deal paying nearly $10M per year. Unlike the other free agents of this class like Andre Iguodala, Jose Calderon, Dwight Howard and Tyreke Evans, Smith was the free agent without suitors. Unlike the sign-and-trade rumors from Golden State and Houston, no other team with cap space was rumored to present a serious offer to Smith. Without competition, Joe Dumars was there at 12:01a.m. at the start of free agency, with no other cap space bidders making a peep until the deal was done.

Like Ben Gordon, Smith is a gifted player, but his weaknesses are well-pronounced. Smith is a one-way player, an effective defender on one side of the court but an absolute wash on the offensive end. What's worse, to make use of Josh Smith, Detroit must once again push players out of their natural position to make a marquee free agent signing fit.

Gordon and Smith: a Failure of Fit

Inside look from Orlando 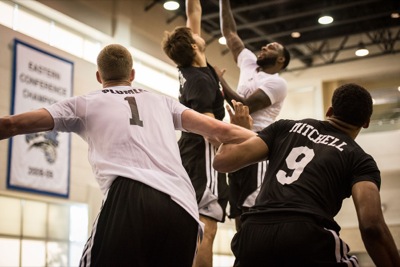 DBB's Mike Payne is in Orlando covering summer league. Check out his pictures and observations from Pistons vs. Nets on Sunday.

When Joe Dumars signed Ben Gordon to a $55M deal in 2009 (note: a million less than the Josh Smith deal), he did so with a player already on contract to play Gordon's natural position. To make things work, either Gordon or Richard Hamilton would need to play out of position or off-the-bench. Hamilton, whose reputation as an outspoken player was about to become a factor, was moved around from the starting lineup to the bench to small forward and back again.

The pairing never worked. And as of this summer, Detroit just paid Richard Hamilton his last paycheck after a buyout two years ago. As for Ben Gordon, Detroit traded the remainder of his salary and gave up a first round pick in the process. Ironically, the cap space that Joe Dumars gained by giving up Ben Gordon has now been spent on a scenario too similar for comfort-- a $56M contract to Josh Smith.

Just as Ben Gordon joined a team with another player at his natural position, Josh Smith comes to Detroit with someone else in his seat. 23-year-old Greg Monroe ended the last season as Detroit's starting power forward, which many pegged as the Georgetown product's natural position before the NBA draft. To preserve what might be the most promising young frontcourt in the league, it is Josh Smith that will need to be played out of position-- to a position he has failed at so far in his NBA career. Like Richard Hamilton, Smith is no stranger to being an outspoken critic when things don't go his way, a characteristic that does not bode well for Detroit's locker room.

Smith at Small Forward: His Worst Position to Succeed

Josh Smith spent the first three years of his career at small forward. On the wing, Smith averaged 44% shooting from the field and 24% from three. He recorded a career-high in turnovers at 3.2 per game and rode a size advantage to a block rate that has never been the same. At small forward, Smith's offense was at his worst until this most recent season, where the advanced stats show one of the most damaging offensive performances of any starting player in the entire league. Offensive Win Shares, which is an estimate of a player's offensive contributions as it relates to wins, showed Smith as one of few players in the league whose offense actually contributed to losses. Coincidentally, one of the few other players who did the same in 2012-13 was one-time Piston Ben Gordon.

In Detroit, Smith will be forced back to his weakest position at small forward. Next to Andre Drummond and Greg Monroe, Smith will be relied upon for perimeter scoring, for ranged shooting from the 3-point line to outside of the post. This has been the primary weakness of Smith's entire career, and Joe Dumars has made this aspect of Smith's game a central focus for this new lineup. It's a continuation of a failed philosophy where Joe forces someone into a role they cannot fulfill (Tayshaun as the primary offensive option, Knight as a passing guard, etc.)

To put this into perspective, Smith's best season was four years ago, and the only season in his career where he did not attempt 3-point shots. He focused his offense on his only area of strength-- the painted area. In fact, from 10 feet to beyond the 3-point line, Smith's range that season was less efficient than Greg Monroe's range in 2012-13.

Relevant to Smith's lack of range, here's a recent point of celebration by our friends at PistonPowered:

Josh Smith is really good. In his best season, Smith had 9.3 win shares ... Smith’s career year came four years ago, but at age 27, hopefully his best days aren’t behind him.

The reason Smith was so effective is because for one season and only one season, Smith stopped doing what he is so bad at-- taking shots from anywhere outside of the painted area. The problem is that at small forward, this point of weakness is the one thing Detroit will so sorely need from him in 2013-14 and beyond.

Beyond his individual offense, Smith is heralded as a fine passer at power forward. This would be a welcome addition if it weren't for Greg Monroe, a player who is an excellent passer at his age. Smith sported a 13.7% assist rate through to age 23. Greg Monroe's assist rate to date-- also exactly 13.7%. Yes, Smith is further along now and sports a 20.9% assist rate at age 27 vs. 18.6% for Monroe's last season. Yet the difference here is negligible, especially to underscore that Detroit did not need frontcourt passing when the team signed Josh Smith.

Smith's passing is nice, but Detroit hadn't even fully explored the passing of its equally capable big man.

Smith is celebrated as being one of the league's premier defenders. In terms of post defense, Smith is amongst the elite, ranked 41st by Synergy Sports. His weakness is spot-up defense, where he ranked 133rd in the league. Here's a very simple question-- which will he be doing more of at small forward? The guy whose specialty is tough, physical defense in the post will be needed to do the hands-off, guide-and-contain D on the perimeter that is not his strong suit. He'll likely be fine in this defensive scheme, and he could very well adjust. But this is not the defense that Josh Smith built a reputation on. Once again, Detroit is expecting Smith to do his best at his least-effective skill.

Smith's tough, physical defense has a great reputation, but that does not translate to solid perimeter defense.

How Will This Play Out?

This is the most expensive contract Joe Dumars has ever given to a free agent. It's a four-year commitment to a player who duplicates Detroit's strengths and emphasizes the team's weaknesses. The Pistons will have to rely on Smith to provide outside scoring, which has been his Achilles heel since joining the league.

On court, Detroit's offense will be very easy to defend. Detroit will start three players from Drummond to Monroe to Smith whose effective scoring location is inside the paint. Opposing defenses can pack the paint to prevent penetration and force Detroit to rely on Smith's bad shot. Detroit's guards will need to be lights-out 3-point shooters, and even their job will be more complicated. The fewer three-point shooters a team has on court, the easier they are to watch on the perimeter and keep from getting open. Detroit will find a ready defender (or two or three) a step or two away from the basket when times get tough. Those who have spent the last year suggesting that a Drummond/Monroe frontcourt cannot work due to range issues are about to see their worst fears get even worse. It doesn't help that Monroe showed better range in his worst year than Josh Smith did in his best year.

Before the 2013 NBA Draft, there was so much promise in the Detroit Pistons. They had what might be the league's most promising young frontcourt, they had a lottery pick and a mass of cap room ready to be used to push the team to the next level. The only thing that could come between this young team and the potential to be a challenger in the playoffs is Joe Dumars himself. As so many cautioned throughout the year, if Joe Dumars was going to keep this team from reaching its promise, it would be done in free agency.

Joe Dumars just failed his third free agent purse in a row. In 2009, in 2011 and again in 2013, Joe has trashed the Pistons again with this odd-year curse. Joe Dumars just gave the biggest contract of his career to the worst possible free agent for the job. While many have whispered that it wasn't Ben Gordon's fault that he failed in Detroit, those whispers will be true in this case. It won't be Josh Smith's fault if this new Pistons era is another failure. The responsibility will be squarely on the shoulders of General Manager Joe Dumars.

He just picked the wrong man for the job, paid him the most he's ever paid a free agent, and he expects him to succeed in the areas he is the weakest. This free agent period could not have gone worse for Detroit. If you don't agree now, it's only a matter of time until you sing along. Skepticism about Ben Gordon and Charlie Villanueva sure wasn't popular in 2009. Sadly, the skeptics have a better track record than Joe Dumars when it comes to free agency.