Pistons projected as second-best team in East, according to Wages of Wins

The birthplace of Wins Produced tabs the Detroit Pistons as a No. 2 seed in the Eastern Conference thanks largely to a man named Dre.

Share All sharing options for: Pistons projected as second-best team in East, according to Wages of Wins

A lot of skepticism has been heaped on the Detroit Pistons this NBA offseason, and all of it is completely understandable. When you remake four-fifths of your starting lineup, back up a brinks truck to free agent Josh Smith when you already have young bigs Greg Monroe and Andre Drummond in the fold and use another large pile of money to lure the shot-happy Brandon Jennings to man the point guard position for the next four three years, people aren't going to trust that all these new pieces are going to fit.

But just as much as the skepticism is warranted so is the excitement. And there is another reason to get excited -- Wages of Wins, a friend of advanced analytics and creator of the Wins Produced model, just published a pre-season wins projection for every NBA team and player, and it has tabbed the Detroit Pistons as a No. 2 seed in the East behind only the Miami Heat and a projected win total of 53.5 wins. 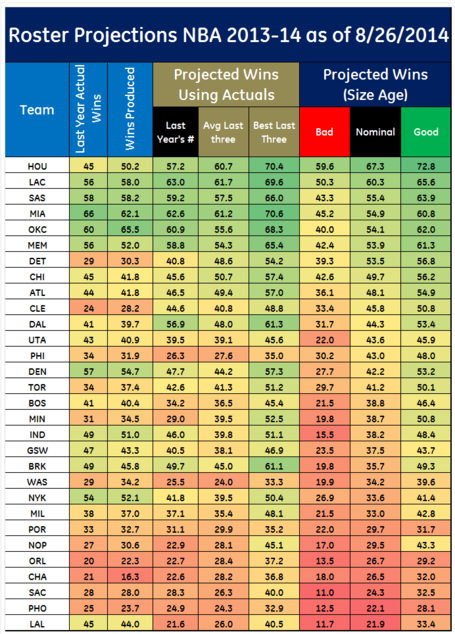 A quick glance at the above chart and my immediate reactions were: 1. Yay, Detroit 2. Philly doesn't know how to tank 3. I don't buy the numbers on Indiana in the slightest 4. Man, watching this Lakers season unfold is going to be fun.

Will they be right? Maybe. Looking at a couple years worth of projections quickly, it seems that the WoW projections are more likely to underestimate a team's performance by several wins than to overestimate it. And considering that by this model (and I should stress that it doesn't appear to be the final iteration), the "worst case scenario," for lack of a better term, of 39.2 wins seems to be right in line with what a lot of people at DBB are projecting.

I will now spend at least the next couple of days preferring to think of this best-case scenario, at least until another set of projections is released.

* H/T to DBBer mcflies who had it first in comments