Share All sharing options for: Previewing the 2014-15 Pistons: Jodie Meeks

When reviewing game film of Jodie Meeks last season, he reminded me of a former Detroit Piston -- Rodney Stuckey. Wait, wait, don't throw your laptop out the nearest window just yet. He reminds me of Rodney Stuckey ... with 3-point shooting. Stuckey was a quality player whose game was always hampered by his inability to develop a jump shot. Meeks is everything good about Stuckey plus the ability to sink 150 3s per season.

Jodie Meeks is everything good about Rodney Stuckey plus the ability to sink 150 threes per season.

Stuckey is a 6-foot-5, 205-pound shooting guard. Meeks is a 6-foot-4, 208 pound shooting guard.  Twenty-seven percent of Stuckey's field goals last season came within three feet of the basket compared to 29 percent of Meeks' shots. Stuckey shot 60 percent in the restricted area and Meeks shot 64 percent. Both guards are small for their position but thickly built and both possess the ball handling skills to take some of the pressure off of their point guards. Both players use their speed and thick frames to blow by opponents and finish at the rim. But the key difference is 3-point shooting. Whereas Stuckey is a career 28 percent 3-point shooter, Meeks clocks in at 37.6 (including a career-high 40.1 percent last season with the Lakers).

That is why Meeks surprised the NBA by agreeing to a three-year, $19 million deal and Stuckey had to settle for the veteran's minimum. And that is why inking Meeks was one of Stan Van Gundy's first priorities in the offseason while there was never any indication Detroit was interested in re-signing Stuckey.

Few people look at the Mike D'Antoni years in Los Angeles fondly, but if there is anyone with an appreciation for Mike D.'s system it's probably Jodie Meeks. With stars Kobe Bryant and Steve Nash mostly sidelined due to injury, Meeks' game was able to flourish in D'Antoni's wide open offensive attack. Prior to his time in L.A. Meeks was largely considered a 3-point specialist. A guy who would camp out on the perimeter and make any defender who sagged off of him pay for it. And he was really good in this role. He has nearly 1,500 3-point attempts and is a career 38 percent marksman in his five-year career. He also had career bests in both attempts and shooting last season.

But this past season with so many weapons out of the lineup in Los Angeles, Meeks added a new wrinkle to his game -- cutting to the basket and finishing at the rim. Meeks attempted a career-high 33 percent of his field goals in the restricted area last season and more than doubled his free-throw attempts. Before last year, he had attempted less than 20 percent of his shots in the restricted area.

But the Lakers needed players to move without the ball and shoulder more of the offensive load, and Meeks stepped up and delivered. Nobody should mistake Meeks for an offensive playmaker. He's not going to break his defender's ankles and create his own offense. But he has a nose for the basket and a willingness and the ability bull his way inside and finish at the rim. After reviewing game film of Meeks' great season in L.A. it's clear that most of his quality looks came on the fast break and off of basket cuts -- especially when he was in position at the corner 3. But he also showed the ability to finish in traffic with contact. He's not just converting bunnies here.

And because he is such a dangerous 3-point shooter he was able to exploit defenders who instinctively collapsed on him when receiving a pass. When his shot was contested Meeks didn't have to either shoot anyway or pass the ball. Last year, he used the opportunity dive toward the basket and get a high-percentage look for himself. 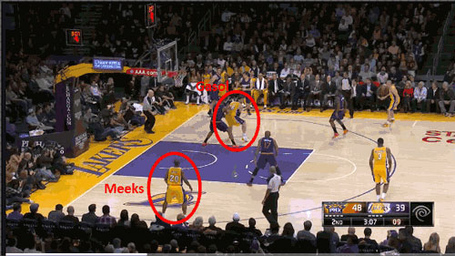 Here Gasol is controlling the offense while the Suns' P.J. Tucker (No. 17) must watch for Gasol's penetration in the paint while also staying near both Meeks and the Lakers point guard (Manny Harris?) on the perimeter. Here, both Meeks and Harris are a threat to take an open 3-point shot.

When Gasol passes out of the post to Harris the defense reacts with Tucker taking Harris and Eric Bledsoe running all the way across the court to challenge Meeks. Bledsoe is fast enough to get there but Meeks knows he won't be able to adjust his momentum and takes the opportunity to drive into the lane.

With the Lakers, Meeks sometimes served as a ball handler and would initiate the pick-and-roll with Pau Gasol. His work with Gasol is especially instructive as he is a quality-passing big man and could be a model for the kind of looks Van Gundy wants to create in Detroit with Greg Monroe and Josh Smith.

Here, both Gasol and Meeks are well guarded. Gasol has his back to the basket and is surveying the defense. It's easy to imagine both Monroe and Smith in the same scenario. Not in a jump-shooting position but in the high post and ready to either back down the defender or create an open look for a teammate. 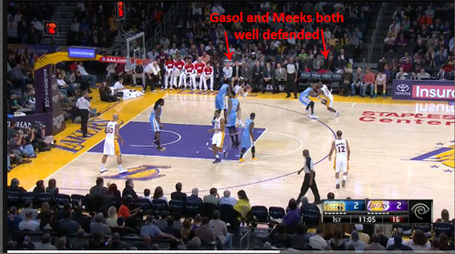 If Gasol and Meeks were only shooting threats this would be relatively simple to defend -- stay in front and put a hand in their face. But Gasol's passing ability and Meeks' threat to cut to the basket along the baseline are both in play and the Nuggets know it. Gasol and Meeks decide to run a simple give and go. Meeks' defender wants to cut off the baseline opportunity, and Meeks and Gasol use the defender's momentum against him. It doesn't hurt that Wilson Chandler inexplicably has his back turned to the play and is totally lost on the interior. This opens up a narrow driving lane for Meeks and Jodie is quick to strike.

It was a career year for Meeks in Los Angeles and his skillset fits Van Gundy's priorities well. Meeks can shoot, cut, run the floor and handle the ball. While many pundits were skeptical of the Meeks signing when it first went down, I think many people will quickly be converted into believers. And Meeks is going to have a bigger role in this offense than that of just a 3-point specialist.

Stan Van Gundy has talked a lot about finding the right mix of talent for both the starting lineup and the reserve unit. Most people have filtered this through how the new head coach will use his trio of big men. But it is also an important consideration at the shooting guard slot where he could prioritize the scoring of Meeks or the defensive versatility of Kentavious Caldwell-Pope.

If I had to bet, I'd wager that Meeks wins the battle out of camp. With the kind of inside-out game Van Gundy prefers, Meeks is a better fit. Meeks can spot up on Brandon Jennings penetration. And when the team is working through quality-passing big men Greg Monroe and Josh Smith, Meeks' ability to both cut to the basket and pop for the 3-point shot will make Detroit's pick-and-roll much more dangerous than in years' past. And having the best 3-point shooter in the starting lineup will turn Jennings into much more of a passer (which he has shown a willingness to do) and less of a shooter.