Brandon Jennings brings swag, but Stan Van Gundy demands accountability. How can Van Gundy get the most out of Jennings in 2014-15?

Share All sharing options for: Previewing the 2014-15 Pistons: Brandon Jennings

In a word -- SWAG. It's all that's exciting and all that's wrong about Brandon Jennings. Swag is the demeanor, the confidence, the half-court three pointer and the no-look pass. It's also the hero ball disaster, the fall-away long two and the willful ignorance of defense and accountability. The swagger of Brandon Jennings is a blessing and a curse, and we as fans collectively celebrate and condemn this characteristic over every other play.

If swag has an inverse value, it's nuance. From the bleacher-level view, it's hard to see anything nuanced about Jennings' game. The words "careful", "deliberate" and "calculated" just don't seem to be in his vocabulary. He's clearly gifted, relying on instinct and vision to manage the flow of an offense. But the problem for Jennings is this complete lack of nuance, the inability to understand his own weaknesses and proactively play to his own strengths. As the point guard, this is no one's decision but his own. He has the ball in his hands and the offense at his direction, but he seems to prefer the bad shot over the extra pass, the slash and burn over the offensive reset.

There's reason to believe that Jennings can be an improved defender under Stan Van Gundy.

Nuance isn't just important for Jennings as a point guard, it's also important for the Pistons coaching staff when using Jennings. Buried beneath his most glaring weakness -- 37% field goal shooting -- are a handful of good shots and a sea of bad ones. Despite that low field goal rate, Jennings was miles ahead of co-conspirator Josh Smith in terms of points produced per possession. He didn't take 14 shots to produce 14 points, he actually presented a margin of positivity that complimented his passing game quite well.

In short, beneath the barrage of missed shots, there's some value hiding down there that a coach can exploit with a little bit of nuance. I'll even go a step further -- Jennings has shown that he can be a focused defender under the right coach. Not a plus defender by any means, but there's reason to believe that Jennings can be an improved defender under head coach Stan Van Gundy.

Van Gundy is key here. Key to the nuance, key to making the most of the SWAG while massaging out some of the mess.

It's hard to say that Brandon Jennings' first year in Detroit was disappointing. To be disappointed, you have to hold some sort of expectation for positive performance. Few fans did in 2013-14, but the season Jennings submitted was still unfortunate to witness.

In most cases, his first season as a Piston was predictably bad. He shot less than 34% from three, on par with his perimeter shooting in his second and third year in the league. He defended terribly, something he was known for in his final year in Milwaukee. He reverted to hero ball when the offense stagnated, leading many second-half collapses. This was all nothing new. Just more of the same. It's hard to feel disappointed when this is precisely what you would expect.

Then there's Jennings' passing. His passing game in 2013-14 reflected a huge step forward, and he became one of the premier passing guards in the NBA. No one could have really expected this. It was a pleasant surprise.

Actually, no. This was just as predictable as the rest. In his first three-and-a-half years in the league, Jennings played the point under Scott Skiles. Despite holding the league record for single-game assists, Skiles has historically ran a very low-assist game. Skiles runs an iso penetration, drive-kick game with his guards, and while pick-and-rolls are frequent, Skiles' guards generally hold the ball and attempt a perimeter shot instead of feeding the roll man. There's a lot of passing going on, but very little point-to-scorer feeds going on.

Milwaukee fired Scott Skiles in 2012-13, and half way through the season, Jim Boylan took over. Everything changed for Jennings. After the All-Star break, you see a more pass-focused game where Jennings is less involved in a one-man scoring game. If you look at the splits, post-break Jennings dished 7.3 assists in less than 35 minutes, while attempting a lower 13 shot attempts per game to score 16 points. Line that up to Jennings in 2013-14, and you see a remarkably similar player. Those assists, especially in relation to shot attempts, point to what he produced so far as a Piston.

There are two key exceptions though. The "Pick and Hold" and the transition three. Under Boylan, Jennings excelled in shooting 3-point shots off the pick-and-roll. We're talking 41% according to the now defunct Synergy Sports (somewhere, an eye tester is stroking his cat and laughing deeply at Synergy's demise). And it makes perfect sense. You've got a street ball iso point guard who has spent most of his life holding the ball and breaking ankles, and he exceeds in a play where he holds the ball and uses rolling men to create space? How outrageous.

Then there's the transition three. It's a shot that everyone hates unless it goes in. Fans were supportive of the transition three when the ball was in Chauncey Billups' hands, as they should have been. They should feel the same of Jennings, who converted 44% of his transition three point attempts in his final year in Milwaukee. In terms of eFG%, that shot is about as efficient as anything Detroit can produce. Shots like these are areas where Jennings should get the green light, instead of being able to do pretty much whatever he wants whenever he wants.

To get the most out of Brandon Jennings, you need to have a nuanced view of his game, then a rigid plan to manage it. It's reasonable to be confident that Stan Van Gundy is the type of guy to understand the nuance and plan accordingly.

Under the aforementioned Scott Skiles, Brandon Jennings was not a total loss on defense. His rookie year wasn't just remarkable for his breakout scoring, but a fair commitment to defense that he didn't show in Europe. He played full court defense with effort, looked for transition takeaways and did a serviceable job on man defense. In other areas, he was quite poor. Without focus on his part and management from his coach, he produces a red carpet defense on a nearly nightly basis. 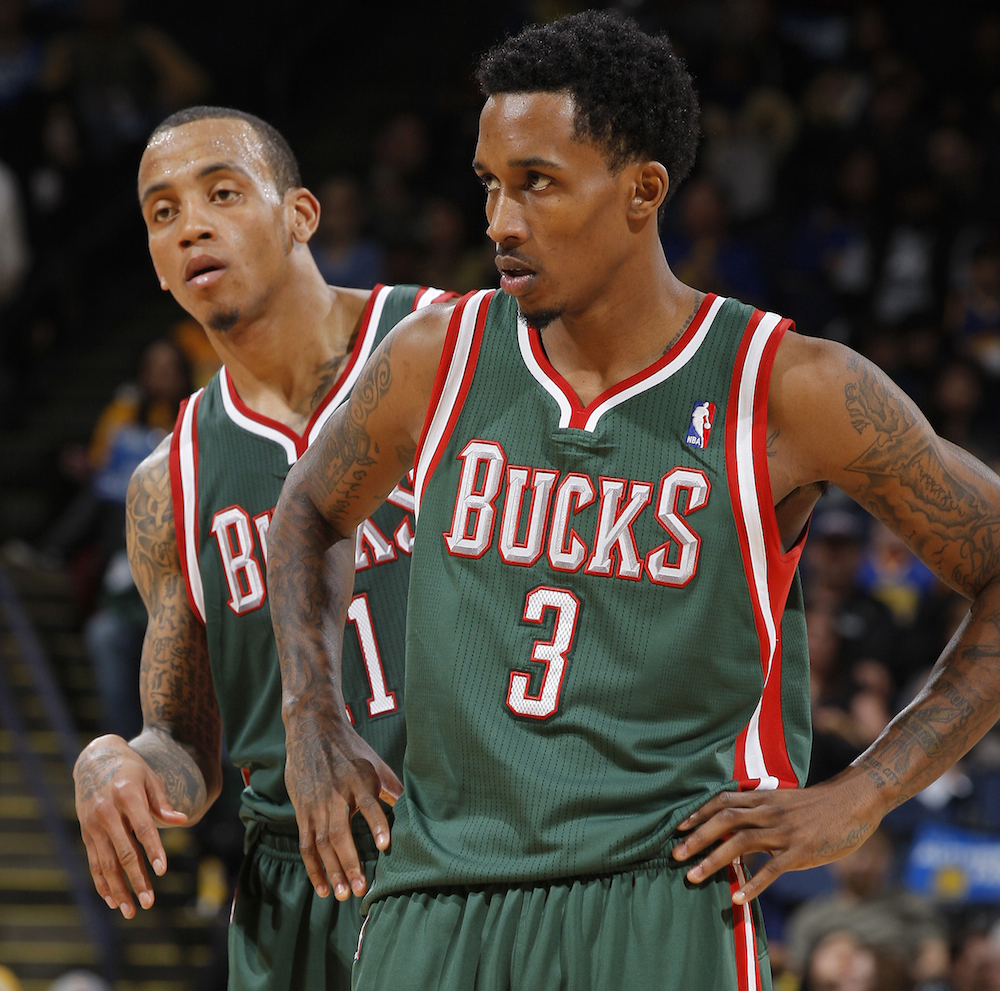 While it's difficult to credit Brandon Jennings with the above numbers given the quality of the players around him, it does tell another story. If the other four guys really invest in the team's defense, Jennings can be an adequate contributor and not the weak link that breaks the chain. Given Stan Van Gundy's history as a coach, it's not unreasonable to believe that Jennings can be a contributor in a new scheme.

In short, I'll go ahead and make a bold prediction: Brandon Jennings will be an improved defender in 2014-15. Not average, not good, not impressive. But "improved" is a fair term, and "adequate" might even be within his reach.

On the other end of the court, Van Gundy needs to run "pick and hold" plays for Jennings quite often, preferably when Josh Smith is on court at the 4. I'd rather Jennings keep the ball from Smith than either Drummond or Monroe. Another area of strength is that transition three, a shot Jennings used to make on par with Chauncey Billups back in the aughts. Those should be the only green lights Jennings gets, and beyond that, he needs to be selective and held very accountable.

Ultimately, there's a wild card here. D.J. Augustin is waiting in the wings, ready to replace Jennings should he not follow Van Gundy's plan. That makes accountability a very real thing in Brandon's world.

Stan Van Gundy might be the perfect coach for Brandon Jennings. He'll see his areas of value, he'll attempt to optimize them, and he'll hold Jennings accountable if he doesn't get it right. I believe we'll see a more efficient Brandon Jennings in 2014-15, and an improved defender on the other end. Even with these improvements, the numbers themselves aren't much to look at.