Despite getting only one win on their four-game road trip, the Detroit Pistons do not move much in the media's power rankings.

Last week I laid out how it would be just as possible that the Detroit Pistons could go 4-0 on their road trip as it was for them to go 0-4. Thanks to a depleted Oklahoma City Thunder, the Pistons finished their road trip 1-3. Let's see how that affected their power rankings.

I'm just going to drop this image that combines Josh Smith and Kentavious Caldwell-Pope's shot charts and walk away slowly: 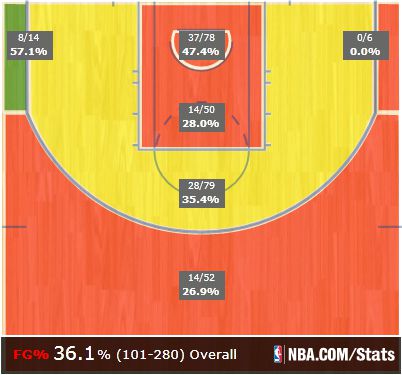 I don't think that's entirely fair. Has Kentavious Caldwell-Pope been what he was in Summer League or Preseason? No. But if it wasn't for KCP, the 3-point numbers would be 2-for-2, 2-for-15, and 0-for-1. KCP's .333 from long distance isn't good, but it's a lot better than Josh Smith's .200. Here is what should happen: Josh Smith should stay inside the paint and KCP should stay outside the 3-point line. Get it? God it? Good!

Can't check Twitter these days without hearing about Brandon Jennings' gaudy PER of 23.6. The Pistons, of course, were hoping such numbers would be found next to Andre Drummond's name after a Team USA summer, but AD's PER is a mere 12.0 and prompted this inquest from Zach Lowe.

The article presented is an ok read. It has enough kool-aid in there to keep us from jumping off the ledge, but none of us Pistons fans like to read anything that suggests Drummond isn't as efficient as he was the last two years. Now, if Brandon Jennings can keep his efficiency going while Drummond gets back to that level, that would be amazing. They should really change PER to Player's ESPN Rating.

And that didn't go so well. Honestly, is that all you have to say Yahoo? How about some insight as to why these teams are ranked as they are.

Stan Van Gundy can't solve everything? Or is it more: "Playing Caron Butler this much and giving the guards this much freedom isn't a good plan?" They still can't shoot: 29th in the league in effective field goal percentage.

Might that have something to do with the team's shot leader, Josh Smith, having the second worst field goal and worst 3-point percentage? Also doesn't help when you bring in a sharp shooter, D.J. Augustin, who is right behind Smith in both of those stats. Also, Caron Butler is only playing this much because both Jodie Meeks and Cartier Martin are out with injuries. Once either or both of them come back, things will change.

Nine of the Pistons' 10 games have been within five points in the last five minutes, and their offense has been pretty awful in those situations, shooting 30 percent from the field, 4-for-22 from 3-point range, and 12-for-24 from the line. Down four in Chicago with two-plus minutes left and 14 seconds on the shot clock, Josh Smith decided to take this shot.

Shhhhhh. Don't tell other teams what Josh Smith does to kill his team? We're still hoping the Kings are interested. But it is not like those stats are too far off from last year at least in terms of league ranking as we were in the bottom four in all of those categories. Let's just say there will be no clutch commercial for the Pistons any time soon.

It sucks that the Pistons are 3-8 after 11 games. However, it's not much different from last year as the Pistons started the season 4-7 in their first 11 games. This could mean we are on our way to finish with as many or fewer wins than we did last year. But I will hold out hope. It has been stated here before that Stan Van Gundy started his tenure with the Miami Heat 0-7 but finished 42-40 going 17-5 in March and April of that season. Could the same thing happen? Maybe, but not likely.

The Pistons only have two more games this week, at home against the Phoenix Suns and in Atlanta against the Hawks. Having lost by 14 to Orlando and being lower in the standings than the Indiana Pacers, don't expect next week's rankings to improve.