After a couple of adjustments to the roster, the Detroit Pistons are playing like a brand new team.

Due to the holidays and a few minor roster changes last week, I was unable to get to the Power Rankings roundup. Therefore, allow me to attempt to cover both in this week.

Last Week:
Four games, four losses, and another week in the books for the Pistons. Everything seemed to be fitting status quo until Stan Van Gundy decided it was time to outright release Josh Smith. One more look at his shot chart this season for the road: 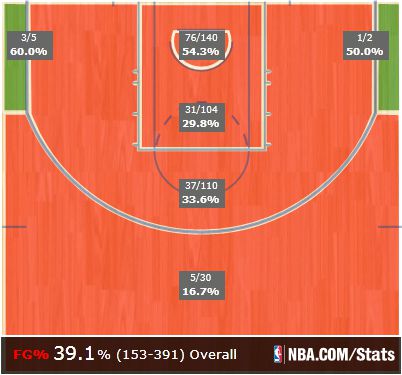 I am thankful that whenever I want to see horrid images like this ever again, I will be looking for another team's rankings, not the Pistons. Well, I hope so. Josh Smith is not the only bad shooter in the league.

This Week:
The Pistons played just two games, but they weren't short on surprises. How about a 23-point drumming of the Cavaliers that included an 18-0 run! So, yes, Detroit is 2-0 since released Josh Smith. Put that in your diet Pepsi and sip it.

What? You like to show shot charts so much, why not show the 3-point shot chart for the game against the Cavaliers? Or maybe mention the 119 scored on the Pacers? Ok, calm down, like they said, it is only two games.

Last Week:
Andre Drummond recently reeled off five straight double-doubles, averaging 16.4 PPG and 15.2 RPG in that stretch, then rumbled for 18 points and 20 boards in Sunday's loss at Brooklyn. Which means that we might finally be seeing something watchable out of the Stan Van Gundy Pistons.

Andre Drummond is definitely most watchable. I'm hoping that this type of play continues alongside The Moose (while the Moose also succeeds) in hopes that he will resign in the offseason.

This Week:
Who else spent the weekend counting down until lunchtime Monday to see what sort of bombshell surprise Stan Van Gundy has in store for us this week? Not that you can quibble with the results after seeing how liberated the Pistons look -- Andre Drummond in particular -- post-Josh Smith.

The Pistons truly do look liberated. I haven't been able to watch any of the games except for some of the replays on ESPN or the videos on stats.nba.com, but even those few videos make the Pistons look like they're having fun playing with each other. NO MORE COHESION ISSUES!!!

Last Week:
The Pistons must have been really tired of Josh Smith to waive him Monday with two years and $26 million remaining on his contract.

You have no idea! Also, he is not worth losing a first round pick over, otherwise we would have traded him.

This Week:
The Pistons look a lot better since trading Josh Smith. Is there still enough time for Detroit to make a playoff push in weak East?

Last Week:
There was a brief moment in the Pistons' loss to the Nets, where they were down three, and Kentavious Caldwell-Pope hoisted a 3-pointer, when I thought, "Just maybe, this one time, they'll get some good luck." Then I remembered the Pistons can't shoot worth a crap, and they lost. But that moment was kind of nice, like watching snow fall on Christmas Eve.

Can you imagine how I felt after that barrage of three pointers yesterday against the Cavs? If this team can start shooting even 10 percentage points lower than that from deep for the rest of this season, it's a completely different team then.

This Week:
Uh-oh. They are 2-0 after waiving Josh Smith, and now just 6.5 back of the seventh spot, with four months and a trade deadline to go. Their defensive effort Sunday vs. the Cavaliers was the best it has been this season. Can they swing a deal to add one more guy and push them into "decent" AKA "a middle of the playoff seedings Eastern Conference team?"

Eight more straight wins (not likely) and you'll have to be committed for hysteria.

If Detroit goes on a ten-game winning streak, you guys will have to have me committed for hysteria.

But honestly, I am not even sure a trade needs to be made right now. Yes, if we could trade for Jimmy Butler without losing Monroe and Drummond, why not. But I'd like to see where this current setup is going first.

They don't appear to archive their rankings, sorry.

This Week:
Convince Greg Monroe to stay. It seems unlikely now, but a few months with Josh Smith gone should help.

Last Week:
The Pistons' defense is still awful, Brandon Jennings is still erratic, and Josh Smith still can't shoot, but a couple of their 21-year-olds had solid weeks. When he wasn't getting dunked on, Andre Drummond grabbed 68 rebounds and blocked nine shots in four games. And Kentavious Caldwell-Pope shot 12-for-25 from 3-point range in the last three.

One of those issues have been fixed, while the other two rays of hope continue shining. If Jennings can keep his head about him, and not think he's the leader (but A leader) of this team, and continue his play the last two games, this could become a scary team.

This Week:
The Pistons were bound to make some shots eventually, but it's not a coincidence that their two best offensive games have come with the departure of Josh Smith. Jonas Jerebko, who saw the biggest increase in minutes, provides better spacing and was already one of the team's best shooters this season. This week provides an opportunity to keep winning.

And that is exactly how it should have happened. I'll be honest, I was king of concerned that the available minutes would have been spread too much to Monroe (north of th 36 a game), Singler/Butler at the power forward spot (this should never happen), and very little going to Jerebko. I'm glad that hasn't happened...yet.

I'm still trying to understand what I listened to on my drive home from Florida Sunday afternoon. I mean, I was kind of glad I was going to hit dead spots so I had an excuse not to listen to the game, and when we were down 15 in the first quarter, I wanted to turn it off then. But for the Pistons to outscore the Cavs 86-52 in the last three quarters, I was dumbfounded.

The Pistons have three winnable games this week. They first play in Orlando on Tuesday and then in New York on Friday. They will finish the week Sunday at home against the Sacramento Kings who have DeMarcus Cousins back. If the Pistons continue their play of the last two games, the Pistons could be on a five game win streak.