Share All sharing options for: Rising Stars MVP trophy breaks before being presented to Andre Drummond

Drummond was saying "ohhhhhh noooo" as he watched his MVP trophy breaking in half and falling to the ground, which was the only thing Drummond was unable to snag from the air; but we were all, like, "ohhhhhhh yesssss" as we witnessed Drummond score 30 points -- while shooting 6 for 8 from the line! -- and break a Rising Stars record with 25 rebounds to earn the trophy pieces he ultimately held up as one for the cameras to capture.

And look at TREY BURKE's little-kid-shocked face, via Loki.Nick in the comments: 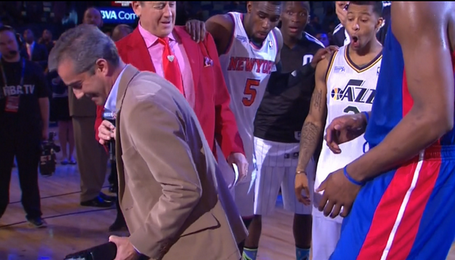 I'm also sure TNT loved Tim Hardaway Jr.'s ESPN plug when he pulled the mic from Craig Sager and quipped "ESPN's Not Top 10."

Not Drummond's performance, though, because that was definitely Top 10 and well worth the separate trophies.