Pistons vs. Mavericks final score: Detroit doesn't have any D vs. Big D

The offense kept the Pistons around, but Dallas ultimately prevailed 113-102.

Share All sharing options for: Pistons vs. Mavericks final score: Detroit doesn't have any D vs. Big D

The offense clicked for three quarters, but the defense was noticeably deficient for the entire game. Giving up 60-plus first-half points and battling back from a double-digit deficit at the half might work against a sub-.500 team as it did on Friday night, but it won't work against Dirk Nowitzki and the Dallas Mavericks.

While the Pistons did do a better job on defense in the second half overall, there were too many letdowns in key moments. For example, the Pistons pulled within four points twice near the end of the third quarter, but Nowitzki hit a jumper and then, after Will Bynum responded, Greg Monroe blew his assignment on Brandan Wright, allowing Wright to cut to the basket for an extremely quick and uncontested dunk.

In the fourth quarter, the Pistons found themselves again within four points a couple different times. Vince Carter and Nowitzki sank momentum-crippling triples each time, respectively. That was early in the third, with about eight and a half minutes left, so there was plenty of time to still make a run, but the Pistons didn't make another field goal for three minutes and only made four from that point on.

The Dallas Mavericks entered the game 28th in rebounding, and they outrebounded the 8th-ranked Pistons 50-39. Andre Drummond was in foul trouble for most of the game, only playing 20 minutes, and finished with three boards. Josh Smith also only had three.

Smith scored a season-high 32 points on 14-for-20 shooting. He was 14-for-17 after three quarters, but missed all three of his shot attempts in the fourth when he started to regress back to J-Stooge. Here is his shot chart from the game: 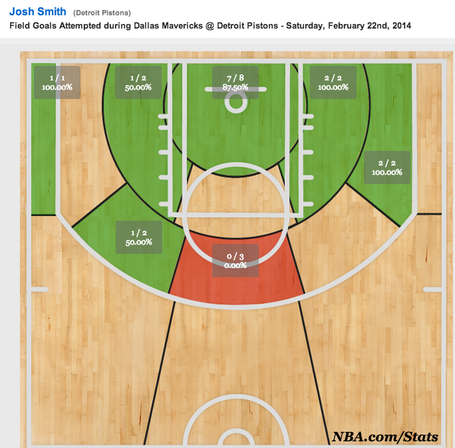 -- Monroe also stood out with 17 points, 17 rebounds and two blocks. He's certainly not free of blame on defense -- I called him out above, because that was BAD -- but this was another monster game in the box score. Monroe has a little streak going with blocked shots, too, as he has now blocked at least one shot in five straight games after going 24 straight without a single block.

-- Will Bynum off the bench was again a spark and again forced John Loyer to limit Brandon Jennings' play in the fourth quarter (3:23 tonight after zero minutes Friday night). Bynum had 17 points, eight assists (two turnovers) and did this, which drew some oohs and aahs from the crowd/benches:

-- Monta Ellis dishing out 13 assists and only shooting nine times was weird to see.

-- Pistons are back at it on Monday vs. the visiting Golden State Warriors, who will be starting an East Coast trip and may be without David Lee (illness) and Andrew Bogut (shoulder). The Pistons fell another game back of the No. 8 spot in the Eastern Conference (3.5 behind the tied Atlanta and Charlotte).