The Pistons ended their four-game losing streaking and they have Andre Drummond to thank for that.

The Pistons outscored the Knicks 57-41 in the second half to end their four-game drought, 96-85. Brandon Jennings had six assists in the third quarter, leading the Pistons back. In the fourth, Will Bynum played closer as Jennings sat, scoring all 16 of his points in the final frame.

It was a mostly ugly game between ugly teams, but Andre Drummond made it look so beautiful. The 20-year-old big man grabbed a career high 26 rebounds -- the first Piston to have 25 or more since Ben Wallace did it in March 2002 -- and Drummond added 17 points, three blocks and two steals on top of that. According to B-Ref (also via Shinons*), Drummond's only the second NBA player dating back to 1985-1986 to put up such a stat-stuffing line. Kevin Willis in 1992 is the only other. That's it -- 20-year-old Drummond and a 29-year-old Kevin Willis (who attended high school in Detroit, by the way).

Of less historical importance, Drummond also notched his 44th double-double of the season, putting him into elite company with Bill Laimbeer and Grant Hill as the only Pistons to record that many double-doubles in a season since 1984.

Signature offensive moments of the game: 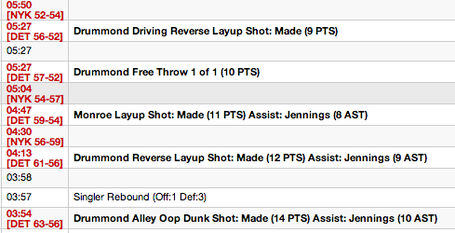 -- Brandon Jennings was a point away from a double-double (nine points and 11 assists with four turnovers) and Greg Monroe was a rebound away from his 26th double-double of the season.

-- Like Bynum, Rodney Stuckey scored 16 off the bench, too.

-- LeBron James' 61 points and the Heat helped the Pistons pull within three games of the No. 8 seed with 22 games to play. Pistons play Bulls on Wednesday.