What to expect from Stan Van Gundy's Detroit Pistons

Stan Van Gundy will be taking over as both head coach and President of Basketball Operations for the Detroit Pistons. What will change under his watch in 2014 and beyond?

Share All sharing options for: What to expect from Stan Van Gundy's Detroit Pistons

Without a coach, a general manager or even an identity, the rudderless Detroit Pistons have been stuck in windless waters since the end of 2013-14.  This changed in a flash on Tuesday, when news broke that the Pistons were nearing a deal with Stan Van Gundy to take a comprehensive role in both the big chair and the front office alike.  Van Gundy will be the next Head Coach and President of Basketball Operations in Detroit, a bold step for the franchise and an uncommon sign of trust in its next Head Coach.  While the news is not yet official, it's a fair time to ask -- how will this big new hire play out on the court?

A Record of Success with Talented Big Men

Before joining the Orlando Magic, Stan Van Gundy spent a year (of two-and-a-quarter) with Shaquille O'Neal and Dwyane Wade in Miami, leading the Heat to a conference-best .720 record.  The Heat were bounced from the playoffs that season by our own Detroit Pistons in a 7-game Eastern Conference Finals.

Is Van Gundy's Past an Indicator of Detroit's Future?

In Orlando, Stan Van Gundy ran a 1-in/4-out offense with Dwight Howard as its centerpiece.  The team used Howard as a dunk/layup/pick/oop scorer while four players, point guard to power forward, spotted up for perimeter scoring opportunities.  The team ran plays through its point guard, but also used a wing player as a second point of distribution.  In terms of personnel, it wasn't just Jameer Nelson running the offense, but also Hedo Turkoglu on the wing with four or five assists per game.  It was complicated, it was successful, but in the end, it was also not too difficult to defend in a playoff series.

In Miami, Van Gundy's second (and abbreviated third) season featured Shaquille O'Neal up front, Udonis Haslem at power forward and Dwyane Wade at shooting guard.  This was a successful group of players, a team that was a breath away from an NBA Finals appearance but very different than the team he ran in Orlando.  Unlike the Magic, Van Gundy's Heat team featured only two 3-point threats in the starting lineup.  Wade hit only 13 3-point shots in 2004-05, and next to Shaq, Haslem was certainly not a perimeter stretch four.  That season, Van Gundy used two very gifted scorers in O'Neal and Wade and let them play to their strengths. It was a loss away from the NBA Finals in 2005, and the story could be totally different today had Van Gundy been kept around for another postseason in 2005-06.

Of those two very different playing styles, the 1-in/4-out scheme in Orlando or the drive-and-dump scheme in Miami, might we see either of these in Detroit?

Will Van Gundy Establish a 1-in/4-out Orlando Offense in Detroit?

Given the comparisons between Andre Drummond and a young Dwight Howard, it's a reasonable assumption that Stan Van Gundy might attempt to establish an Orlando-style offense around Drummond in Detroit.  The more you dig, however, the less this outcome appears likely.  The starting group that Van Gundy ran for much of his time in Orlando -- Howard, Nelson, Turkoglu and Lewis -- were all with the team before his first game as head coach.

Rashard Lewis, however, signed his historically bad contract with Orlando a month after Van Gundy joined the team. It's reasonable to assume that Stan had some level of involvement with or awareness of that deal before it happened.  Lewis was a key figure of the Orlando small ball teams, given that every other player was positionally pure.  Replace Lewis with a natural power forward, and the team goes from an unusual 1-in/4-out grouping to a natural 2-in/3-out recipe.

We can only speculate as to how much involvement Stan Van Gundy had in designing the Lewis-at-the-four small ball team in Orlando.  However, we can safely assume there is a pattern based on his 2011-12 roster change to start Ryan Anderson next to Dwight Howard for the full season.  Anderson was a superior stretch four option when compared to Rashard Lewis, a more natural power forward outside of the skill for 3-point shooting.  It appeared to be a more productive pairing with Howard, but injuries and infighting led to a disappointing record and an end to Van Gundy's five-year tenure in Orlando.

The pattern of pairings with Dwight Howard in Orlando, which included both Rashard Lewis and Ryan Anderson (and a brief, injury-forced pairing with Brandon Bass), might suggest Stan Van Gundy could do the same in Detroit.  This leads to the next obvious question:

Could a 1-in/4-out Offense Built Around Andre Drummond Contend for a Championship?

The sky is certainly the limit for Andre Drummond, and when compared to the Orlando Magic, a 20-year-old Andre Drummond has out-produced Dwight Howard at the same age.  In fact, Drummond's sophomore season was more productive than Howard's first three seasons in the pros, with every advanced stat from Wins Produced to PER pointing to a higher rise for Andre.  Even if Andre Drummond can't ultimately eclipse Howard's productivity in Orlando, he's certainly still a candidate to be a 1-in/4-out centerpiece.

The question here, however, has less to do with Andre Drummond than it does the 1-in/4-out philosophy as a whole.  Power forward was the weakest link in Dwight Howard's Orlando Magic, and when the 3-point shots weren't falling, Howard didn't have the offensive game to put the team on his back and score with possession of the ball.  Conversely, when Orlando's competition had a big body with a low center of gravity at the 5, keeping Howard away from the basket made the Magic rely on jump shots to win games.  Again, Howard didn't have the offensive game to isolate or post-up around interior defenders, so the offense fell to jump shots from the other four.

The traditional recipe for championship contenders sticks to the 2-in/3-out formula that represents just about every winner in recent NBA history.  The "2-in" usually includes a defensive specialist and a scorer, from Gasol to Bynum, Garnett to Perkins, Wallace to Wallace.  Every once in a while, you get that one special player who can do both -- guys like Shaq and Duncan.  Around these guys, however, their frontcourt counterparts were largely traditional. Is there any good reason to try the 1-in/4-out in Detroit, given the outcome in Orlando and the traditional recipe for froncourt success?  I'll leave that for the comments, but for now ...

How Might Stan Van Gundy Build a 1-in/4-out Offense in Detroit? 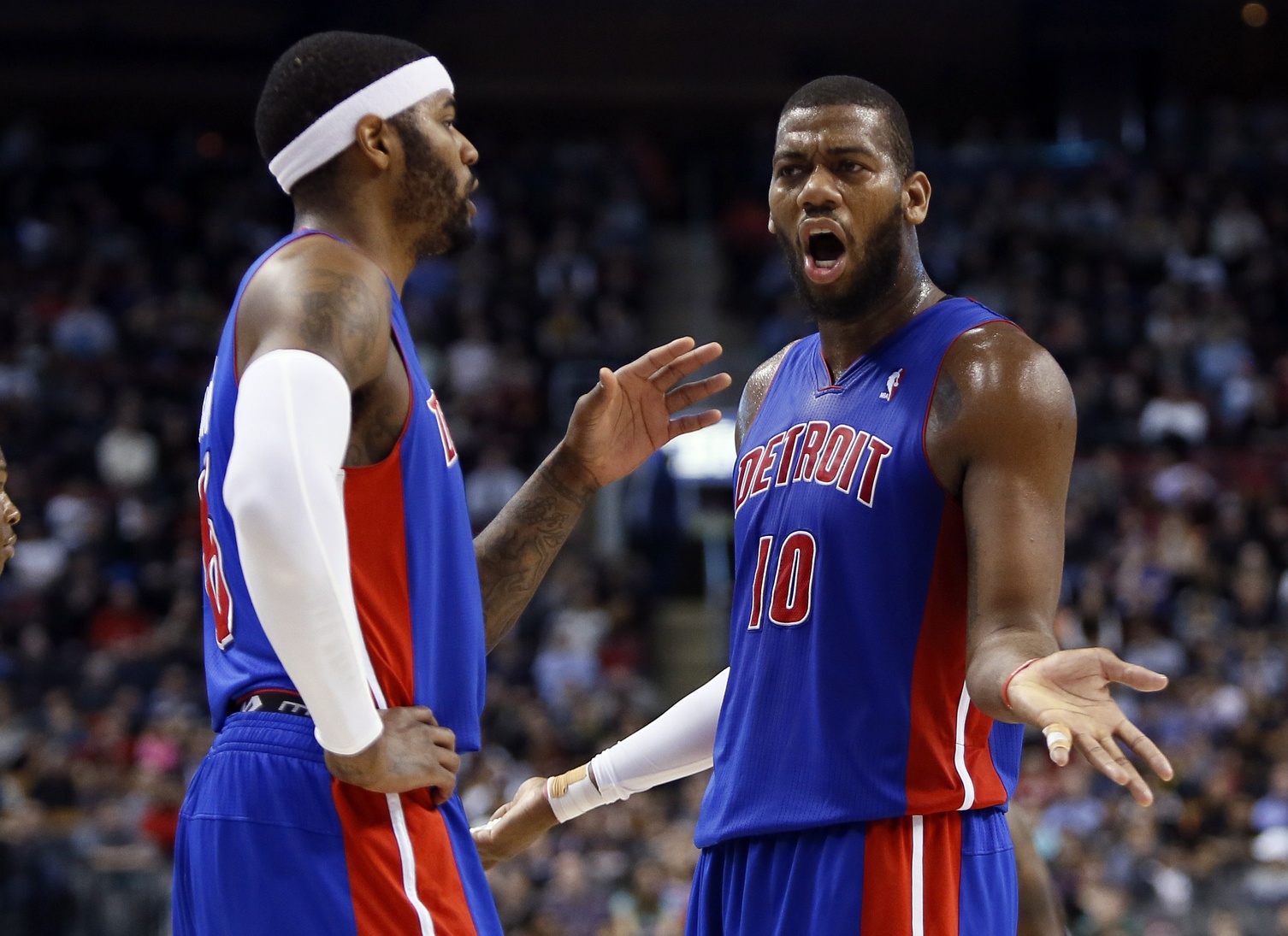 If Stan Van Gundy wants to build a 1-in/4-out offense in Detroit, one of his first moves will be to sign-and-trade Greg Monroe.  Despite showing significant improvement in low-to-high post shooting efficiency in 2013-14, Monroe is certainly not a 3-point shooter nor does he shoot long twos.  As promising (and adored) as Monroe is, he would not fit Van Gundy's scheme, and he'd most likely be moved for a return at another position.

The problem is that the team is committed to Josh Smith for the next three seasons, and Smith's most pronounced weakness is his 3-point shooting.  Smith is averaging less than 28 percent from 3 over the last three seasons, and this sort of range would be wholly unacceptable under Van Gundy's scheme.  Perimeter shooting from the power forward is what makes the 1-in/4-out offense work.  If Smith can't do it, the whole scheme won't either.  The team would be better served (as shown in 2013-14) to prevent Smith from shooting on the perimeter entirely.  Without Monroe and with Smith, the team isn't just back to square one, it's worse off than it would be with Monroe just to satisfy Van Gundy's Orlando scheme.

For it to work, the team would have to not only part with Monroe, but also Josh Smith.  If it couldn't immediately fill the role of stretch four, playing time to Jonas Jerebko and Tony Mitchell would work while the team looks for another option.  The problem here is that there aren't any championship-caliber stretch fours available on the current market.  There rarely are.

Last, given the team's draft range in the 2014 NBA Draft, Van Gundy might have interest in Kyle Anderson from UCLA to fill a role familiar to his Orlando offense with Hedo Turkoglu.  Anderson has the range and passing ability to play a role similar to Turkoglu, giving Detroit the same two points of perimeter distribution that Van Gundy used in Orlando.

Is a 1-in/4-out Offense Even Likely in Detroit?

Now that we've talked this through, I think it's clear just how much of a stretch (no pun intended) this 1-in/4-out small ball lineup might be.  The key players in Orlando's offense were largely set by the time Van Gundy arrived in 2007.  He was using the available pieces at his disposal to run a productive team around Dwight Howard.  I think it's a safer assumption to make that Van Gundy lets the pieces dictate the scheme instead of letting the scheme decide the personnel.  It's what Van Gundy did in Miami, and despite how it might appear in hindsight, it's how things happened in Orlando too.  I might suggest that the Stan Van Gundy Offense (tm) is a far more organic, flexible concept.

We can probably make a much more educated decision about how Stan Van Gundy will approach Detroit's offense by how he handles the Greg Monroe free agent decision.  If he signs and trades Monroe, expect 1-in/4-out to start in October.  If he keeps Monroe, expect a new chapter entirely from Stan Van Gundy.

Naturally, as a writer, a fan of analytics and a student of NBA history, I'd much rather read a new chapter from Stan Van Gundy.  Stan would start day one with the "2-in" portion of the formula ready to go if he wanted, and with the most promising young pairing in the league..  Add a draft pick and a few trade assets, and it wouldn't be difficult for Van Gundy to assemble and field a playoff team in a new vein next season.  Going back to the 1-v-4 scheme just because Drummond resembles Howard isn't a fair expectation for Van Gundy, he deserves more credit than that.

Fortunately, no matter which way Van Gundy should go with the offense this summer, fans should see a marked improvement on defense.  Expect Van Gundy to get the most out of Drummond here, and don't expect him to accept poor effort out of the other four.  1-in/4-out, traditional frontcourt vs. perimeter, either way, fans in Detroit should finally start to see some real defense again under Stan Van Gundy.  As it was in the past, it'll be anchored by the elite big man right in the middle.