Share All sharing options for: Stan Van Gundy plans to build around Andre Drummond and Greg Monroe ... but Josh Smith?

Stan Van Gundy heaped praise on Andre Drummond every chance he got during his introductory press conference, a clear indication that he views the young big man as the most critical building block for the Detroit Pistons.

"There's nothing about Andre Drummond that doesn't appeal to me," said Van Gundy. "I think [this because of] his athleticism, what he's accomplished at a young age. And I was very impressed with my first phone call with him. ... The guy, man, he was asking questions like, 'What do I do? What do I need to do?' He's a guy that wants to be great.

"I think we have two responsibilities to Andre Drummond that will help our team," he continued. "And that is, number one, to do everything we possibly can to develop him as a player. Not just his skills, [but] his skills, the way he prepares for games, his knowledge of what's going on.

"And secondly, we have a responsibility to put a system and personnel around him that allow him to thrive. I think that we have everything we need to do that, it's going to take a little bit of time on the personnel side -- and I hope a little bit of time is until July 15th, because I'm not that patient. But then we've got to build a system around what we have that works."

But Drummond is just one part of the puzzle. Those people who fear Van Gundy's arrival might signal the end of Greg Monroe's time in Detroit should rest assured that Van Gundy clearly values Monroe, as well.

"Looking at the roster, first of all, there's talent here," he said. "Now, do we need to do some things differently and add to it? Absolutely. But there's talent here. You're talking Andre Drummond and Greg Monroe, you're talking in a league where it is getting increasingly hard to find quality big guys, you've got two of the elite big guys in the NBA.

"And I'm not going to go down everybody in the roster ... but there's talent here." 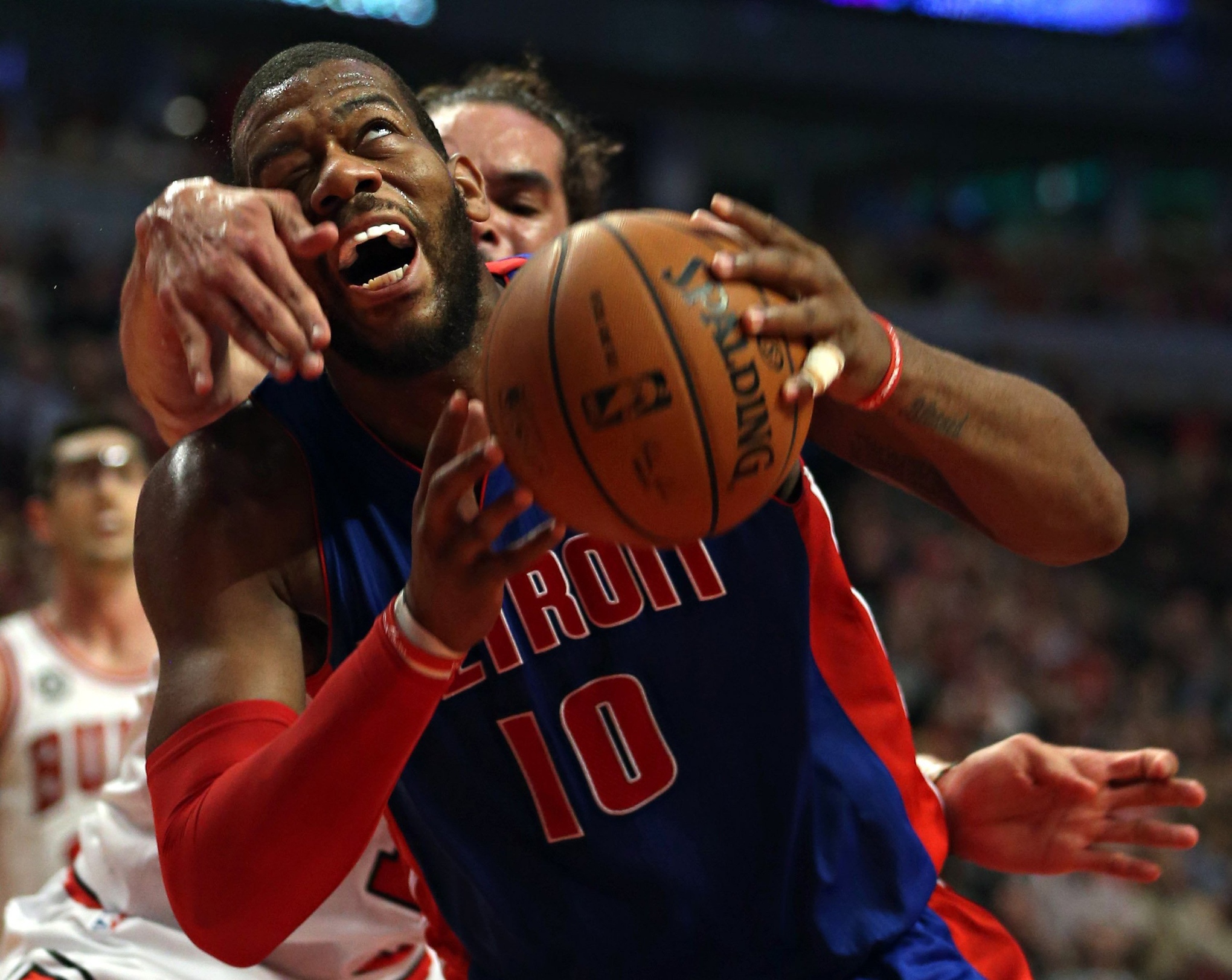 Am I reading too much into things to point out that he didn't name Josh Smith, last year's "prized" free agent, the owner of the most lucrative contract in franchise history and last year's leader in minutes played and field-goals attempted? Perhaps, especially since he talked about how Smith would be used differently in a separate interview later that day. But during his introductory press conference, his first official meeting with Detroit's media, he seemed reluctant to even mention Smith -- even if everyone in the room was thinking about him when he continued his thought.

"As far as whatever problems may be, my approach to that is, I want to come in and go to work. And then I want to give guys, players -- I've talked to virtually everybody already by phone, I'll be meeting with them in person very quickly, and then we will come together and start working. And we'll figure it out ourselves.

"But this is a fresh start for everybody. And it's my responsibility to create a culture of hard work, preparation, team first and all of those things. But I want to give people a chance. Now, if there's people who don't fit into that kind of culture? Yeah, then we've got to make changes. But I'm not making any assumptions right now.

"I've got very positive feelings about our roster, and I have an idea where I want to go with that also. And I can't wait to get started with the players."

Eventually, Van Gundy was asked about the remarkably unproductive jumbo-sized frontcourt the team employed all too often last season. "Is it possible you can still see the three guys, Drummond, Josh Smith and Greg Monroe, playing at the same time for another season?" asked Mike Stone from 97.1 the Ticket. "It just didn't seem to work this past season."

"Well look, I think as a coach ..." started Van Gundy, before an uncomfortably long pause to gather his thoughts. "You go into a season with ideas, certainly, and a plan for how you're going to use your roster the most effectively. But you've also got to be open to any possibility. I don't think there's any doubt that there's going to be situations where you could use those three guys together.

"The question is, is that going to be your predominant lineup?"

"We've got to create the kind of lineup that allows those guys to thrive."

Van Gundy then tripped over his words for the first time all afternoon, clearly attempting to add a positive spin on the situation. "I think ideally -- I'll just say this -- ideally when you've got good big guys -- and look, if you take those three guys as a group and count Josh as one of your bigs, I'm not sure there's another group of three bigs anywhere in the Eastern Conference.

"And so I think what you have to do is put people on the perimeter around them and get them some space on the floor to operate. And you can take that anyway you want. We've got to create the kind of lineup that allows those guys to thrive. So, whether or not that's our predominant lineup, we'll determine that down the road. But those are three great assets and guys that are among the best big guys in this league."

OK, gotcha. At his blessing, this is how I take it: Drummond is a budding superstar and the franchise's No. 1 cornerstone, so his starting spot is assured. And Monroe is "one of the elite big guys in the NBA." Smith? Well, to paraphrase the coach, if Smith is considered a big, then the Pistons are awfully deep with bigs.

Bold prediction: If Smith is still with the Pistons come the first game of the season, don't be surprised if he's coming off the bench. Bolder prediction that may be wishful thinking: At this point, I think Donald Sterling has a greater chance of being an NBA owner in 2014-15 than Smith does wearing a Pistons jersey.

Until Monroe signs an offer sheet, it's not yet set in stone Monroe will return, either. As has been the plan for the past year, Monroe's agent David Falk intends to test the waters in hopes of securing a max contract. That's his right as a restricted free agent, and he'd be foolish not to let the market set his value. But one of the first things Van Gundy did was make contact with Falk to let him know how much he values the 23-year-old big man.

"I had a lengthy call with David Falk, Greg's agent," Van Gundy said. "And I value Greg highly. I think he's one of the elite big men in this league. I think he's got a very high skill level, he can pass the ball, he can score in the low post. And I want them to know that, that I value him highly.

"Basically what we talked about is, I want to start the process by sitting down with Greg face to face, talking about how he sees himself, how he sees our organization and giving me a chance to talk to him about my vision for what goes on and how I think we can create a system that will fully maximize his abilities. And then we will go from there.

"If there's things that they don't like, we'll get into the process. But we've got some time here, and the process got started today. But I think the main thing for right now is, I hold Greg Monroe in very high esteem, and he has great, great value."

Whether that's true for every member of last year's frontcourt remains to be seen.