What if everyone in the NBA wanted to be like LeBron and played for their hometown team?

Only six other states have produced more NBA (and ABA) players than Michigan in the history of the game(s). Over 130 to not be exact. Hall of Famers Magic Johnson, Dave DeBusschere, George Gervin and Mel Daniels, Chris Webber, Glen Rice, Dan Majerle, Rudy Tomjanovich, Darvin Ham, Terry Mills, B.J. Armstrong, etc. Problem for this exercise is that those names are all retired.

Elite Daily recently created images of what every NBA team would look like if players around the NBA pulled a LeBron and went to their hometown teams. And guess what? The Pistons look more than underwhelming on paper: 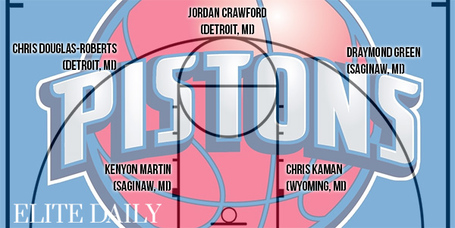 As for the rest of the NBA, who might have the best starting five?

Based off Elite Daily's picks, I'd go with either the Wizards, Lakers, or Bulls (imagining D-Wade and Rose are completely healthy). The Hornets would be fun with John Wall, Chris Paul and Stephen Curry. Andre Drummond alongside Joakim Noah in New York would create havoc. Greg Monroe would be playing with DJ Augustin in New Orleans with Paul Millsap.

And look at the Pistons Hawks' perimeter players: 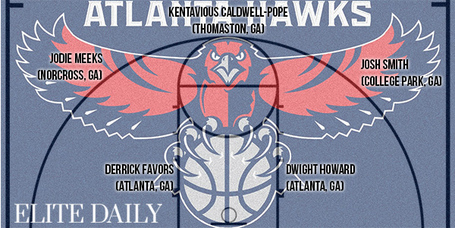 What say you, DBB? Who would have the best homegrown team?

See if you can make more complete rosters in the comments.