On the first day of free agency the Pistons agreed to deals with two wings, Jodie Meeks and Cartier Martin. Martin is the lesser-known of the two, and the lesser paid. Let’s dive into the numbers for the Pistons newest 3-and-D player.

For the second offseason in a row, the Pistons signed a forward away from the Atlanta Hawks. But this one, you might not have heard of.

Cartier Martin's two-year deal with Detroit will make the Pistons the sixth NBA team of his six-year career. It's been a long road for Martin to establish himself in the league, living on 10-day contracts, bouncing from the D-League to Europe before finally making a home in Washington for a few years.

Last season, he played the most minutes of his career with the Atlanta Hawks, and even that didn't go smoothly. He signed an unguaranteed minimum contract, but was waived before the January 7 deadline when his deal would have become guaranteed. After a couple of 10-day contracts with the Bulls, he eventually returned to Atlanta to finish out the season.

As a player, Martin brings solid size as a wing, checking in at 6-foot-7, 224 pounds with a 6-10 wingspan (predraft measuremens from 2007). At 29 years old, he'll be the second-oldest player under contract for the Pistons behind Will Bynum.

Despite bouncing around between three teams over the past four years and living on only spot minutes, Martin has been remarkably consistent in his 3-point shot at 39.3 percent over that time. The vast majority of his offense focuses on 3 pointers with 57 percent of his field goals coming from behind the arc last season. That number would have been the highest among regulars for the Pistons last season, dwarfing Kyle Singler's 41 percent mark.

He's very much a specialist. This pie graph breaks down just how much his offensive game focuses on the catch-and-shoot: 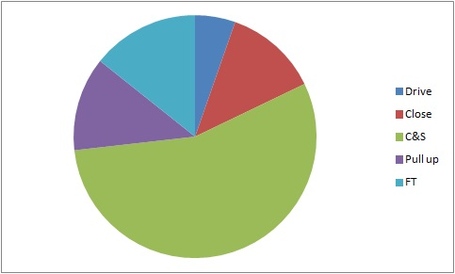 Martin is a springy defender, able to handle both shooting guards and small forwards capably. He doesn't generate many blocks or steals, but his Synergy numbers last year were fairly similar to the Hawks' primary small forward DeMarre Carroll.

According to Synergy, Martin allowed .89 points per possession, compared to .88 for Carroll. He was at his best covering the pick and roll ball handler (.84 PPP) and defending spot ups (.85 PPP), but struggled in isolations (.95 PPP) and coming off screens (.97 PPP). Take those numbers with a grain of salt though, as most of those samples were limited to samples of about 40 field goal attempts.

It's a surprise to see Martin going from on the fringe of the league to a contract offer on the first day of free agency, especially considering the Pistons roster is already crunched for roster spots. But it's clear enough the role that Stan Van Gundy is looking for out of him.

(Update: Cartier Martin signed a two-year deal, not a one-year deal. The second year is a player option, according to Vincent Goodwill and RealGM's Shams Charania)