What do Stan Van Gundy’s signings tell us about his vision?

Stan Van Gundy was active from day one in free agency, filling the roster with a number of his guys. These moves give us a first chance to glean/over-analyze SVG’s intent for the year.

Share All sharing options for: What do Stan Van Gundy’s signings tell us about his vision?

Between Jeff Bower speaking up last week that the Pistons have accomplished their free agency goals and a roster bursting at the seams, it sounds like Detroit has pretty much wrapped up any new additions to the team through signings (though Greg Monroe's situation obviously remains to be played out).

Stan Van Gundy emphasized that he would not be swinging for the fences in his first free agency at bat, instead choking up looking for singles and doubles.

After inking four free agents, his highest profile signings are Jodie Meeks and D.J. Augustin. Two are likely to be for the veteran minimum, Cartier Martin and Aaron Gray. Tossing Caron Bulter into the mix, and it's an uninspiring way to spend more than $14 million. Especially when considering Lance Stephenson or Chandler Parsons might have come on board long-term for that kind of money.

But Van Gundy inherited a roster with 12 players potentially on contract for the 2014-15 season and possibly two draft picks, which wasn't likely to leave much roster wiggle room. Think of college coaches that join a new program and immediately work to fill the roster with their guys.

Losing the 2014 draft pick to the Charlotte Hornets thanks to the failed Ben Gordon-Corey Maggette trade actually helped in this sense, but Van Gundy's attempt to add players that fit his preference still required declining team contracts on a pair of young players with potential and one franchise legend.

So what can we learn from Van Gundy's moves?

The long-discussed Drummond Contender plan typically revolves around building with players on their way up, giving the squad the opportunity to grow together. With the Pistons' best players still in their early 20s, many fans expected to see more youth added to that nucleus.

There have certainly been opportunities with a number of young players already changing teams, but the only particularly young player the Pistons were ever in the mix for was Isaiah Thomas. While DBBers were excited about his potential, he's actually only a year younger than the point guard the Pistons ended up with even though it seems like Augustin has been in the league forever.

The case is somewhat the same in the Pistons' choice at wing. While many would have preferred the 25 year old Parsons, Meeks is only a year older despite having two additional years of NBA experience.

But for Butler, Martin, or Gray, there's really no way to spin it. The likelihood of any of these guys being part of a long-term plan is slim to none.

Instead of chasing youth with upside, it seemed that Van Gundy's priority for the most part was instead targeting players in their prime - or even past it. And he did not show much interest in paying a premium for an extra year or two of youth.

While this may not be the go-to practice for long-term sustainability, it does suggest that perhaps Van Gundy sees the current roster is closer to contending than their 29 wins last year would indicate.

He also shows a sense of being undeterred by a player being a castoff from another team. Despite being only 26 years old, the Pistons will be Augustin's fifth NBA team and Meeks' fourth. Between the NBA, D-League, and Europe, they'll be Martin's eighth team. They'll be Butler's eighth as well, and his third in the past two years.

There's no pinpointing the reason for this trend, whether it's a sense of being able to get more out of them than previous coaches, approaching them with different expectations, or simply just buying low, but it's interesting. 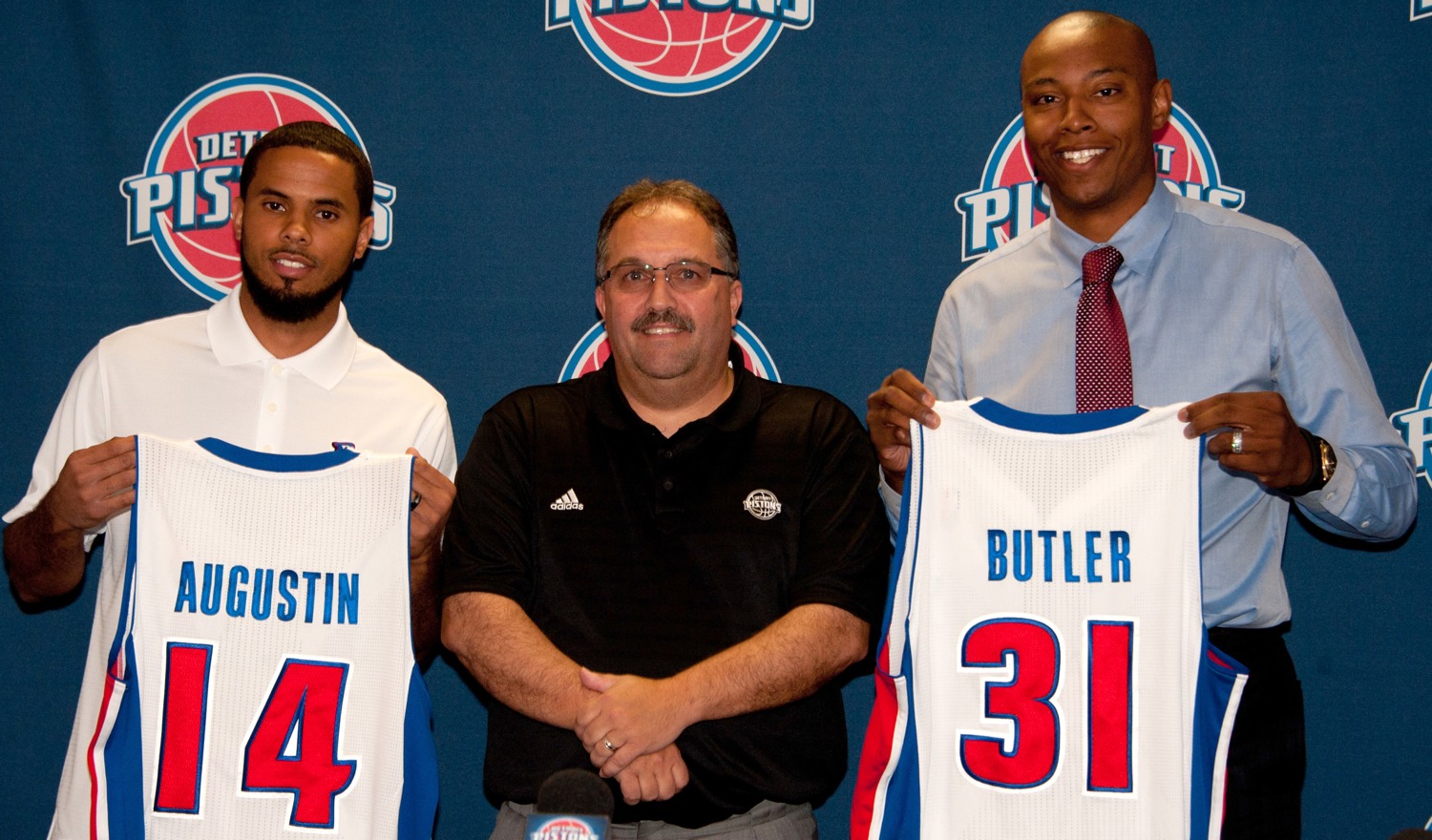 As Packey wrote last week, Jeff Bower expressed satisfaction of the haul of free agents pretty much based on their shooting alone.

In choosing his players to chase, Van Gundy may have just taken Basketball Reference's play index feature and queried for anyone available who made more than 2.2 three point shots per game while shooting over 39 percent.

28 players in the league managed that last year (with at least 600 minutes played), and the Pistons just went and acquired four of them.

And these guys really are pure shooters. Basketball Reference's new average shot distance figure shows most of their shots are typically coming from beyond 15 feet - Jodie Meeks' average is only 14.8 feet, but it's a career low with his career average at 17.2 feet. Butler's average distance last year was a whopping 19.4. By comparison, Brandon Jennings had the longest average for the Pistons at 15.9 feet.

Any of these guys would immediately become the Pistons' best shooter. But it's more than just the shooting, it's how they get their shots. They're each excellent on the catch-and-shoot. Their effective field goal percentages last season were:

Last year the Pistons' best catch-and-shoot player was Jonas Jerebko, with 62 percent effective field goal percentage. But that sample might be misleading, as he didn't even score 100 points off the catch-and-shoot.

Kyle Singler was probably the team's most consistent threat, scoring 292 points on 55.1 effective field goal percentage. Josh Smith was the highest scorer with 341 points but on a miserable 42 percent.

The offense that Van Gundy has in mind should be a great breath of fresh air.

The players Stan Van Gundy signed represent a clear and significant upgrade in this area of the game. And it's something that Pistons fans should be excited about.

After suffering through Isotayshaun or the trainwreck of an offense led by Josh Smith and Brandon Jennings last year, the offense that Van Gundy has in mind should be a great breath of fresh air. After all, you can't catch-and-shoot without passing, and loading up a roster with this type of player likely means a renewed emphasis on ball movement.

This isn't just an accumulation of talent.

If that's what it was, Lance Stephenson might be this team's new shooting guard of the future or Eric Bledsoe should have seen hard pursuit from the Pistons. But Stephenson's catch-and-shoot numbers were a Jennings-esque 48.8 percent effective field goal percentage and Bledsoe's average shot distance was only 12.4 feet.

These guys wouldn't fit what Van Gundy is building. And fit matters more than name recognition.

Anyone would agree that Gordon Hayward or Chandler Parsons would look awful nice on paper with this lineup. And it seems like they even fit the mold of facilitators from the wing that Van Gundy heavily utilized in Orlando.

But look how Jodie Meeks stacks up alongside the two. Parsons and Hayward offer more in the way of passing, certainly. But in the way of shooting or efficient scoring, Meeks easily eclipses them both. Essentially, the two extra assists per game you'd get out of Parsons or Hayward would cost an extra $9 million per year.

This is what targeting efficient, cost-effective players looks like. It's not sexy, it's not exciting, but it beats the hell out of losing a first round pick to get out of the final year of their contract.

While a few of the players might not amount to much during their time with the Pistons, none are likely to be significant sunk costs. They're each low-risk players who stand a strong chance to out-perform their contract's value - and some by a significant margin.

Many pundits are starting to get out their winners and losers of free agency columns, with the Pistons among the latter. Matt Moore put it well in his piece on CBS Sports:

I can have all the faith in the world that Stan Van Gundy will make the Pistons better next season through his coaching and look at this list, Caron Butler (2-years, $9 million), D.J. Augustin (2-years, $6 million), Jodie Meeks (3-year, $19.5 million!), Cartier Martin and Aaron Gray, and still want to throw up. The Pistons spent $14 million for next season on D.J. Augustin, Caron Butler, and Jodie Meeks.

It's true, those four guys aren't going to take this team from 29 wins to 50 wins. On paper, the young big names like Stephenson, Bledsoe, Parsons, or Hayward would look much prettier. And it would at least feel nice if the Pistons had at least put their hat in the ring after those guys.

If the Pistons improve next year, it's going to come from their style of play rather than their personnel.

But it doesn't really matter who the Pistons add if Brandon Jennings and Josh Smith again combine to shoot 2,500 shots on 47.4 percent true shooting. If the Pistons improve next year, it's going to come from their style of play rather than their personnel. They at least now have the tools to change their style of play.

For the first time in his career, Brandon Jennings could have his starting job challenged by D.J. Augustin and possibly eventually Spencer Dinwiddie. There was never an excuse for Josh Smith to ever shoot from 20 feet, but that's now even more emphatically true. And the nice thing about having a number of Van Gundy's guys rather than just one is that there are plenty of players to gobble minutes should Smith come down with a case of Iverson's Back Injury.

But if the new regime had put all of their money after one prized free agent, their flexibility would be much more limited and the team could once again be at the mercy of Smith and Jennings.

Van Gundy said that it was unlikely that pundits would be too impressed by his first free agency venture as the Pistons new top man, and he was right about that. But while the sentiment may be underwhelming, at least there seems to be a clear consistency and direction with the moves. There seems to be a plan that makes sense. And that's a nice change.