Andre Drummond: 'Stan is going to put the ball in my hands'

Detroit's young cornerstone suggests that his role in the offense will expand under Stan Van Gundy.

Share All sharing options for: Andre Drummond: 'Stan is going to put the ball in my hands'

Andre Drummond spoke with SLAM Magazine at the big Jordan Brand event in Las Vegas last weekend about his new sneaker deal with the company. It's a fun Q&A, even if you're not a sneakerhead -- you can just tell how excited the 20-year-old big man is to represent a brand that he wore while growing up.

"As a kid, I always had Jordans in my closet, from 1 to 23," he said. "I had them all in all different kind of colors and styles. So to be a part of the family, it’s a blessing. It’s really exciting that they have an interest in me, seeing that I’m a player of their stature, to have me on the brand."

It's hilarious to see Drummond talk about being "a kid" -- he's 20 years old! He's not talking about the 1990s -- he's talking about a few years ago. But I digress. Read the article, it's fun, and it's a reminder just how much he's enjoying the ride without it going to his head.

One thing I did want to point out, though, is his answer to the question about what he's worked on this summer.

Drummond's efficiency was off the charts last year, mostly because 81.4 percent of his field-goal attempts came within three feet of the basket. He led the league with 0.81 points per halfcourt touch among players who appeared in at least two games last year (sorry for the weird two-game qualifier, but otherwise stupid DeAndre Liggins and his two points, two touches, one game line for the season put Drummond second.) Squint at the chart below, or click to embiggen: 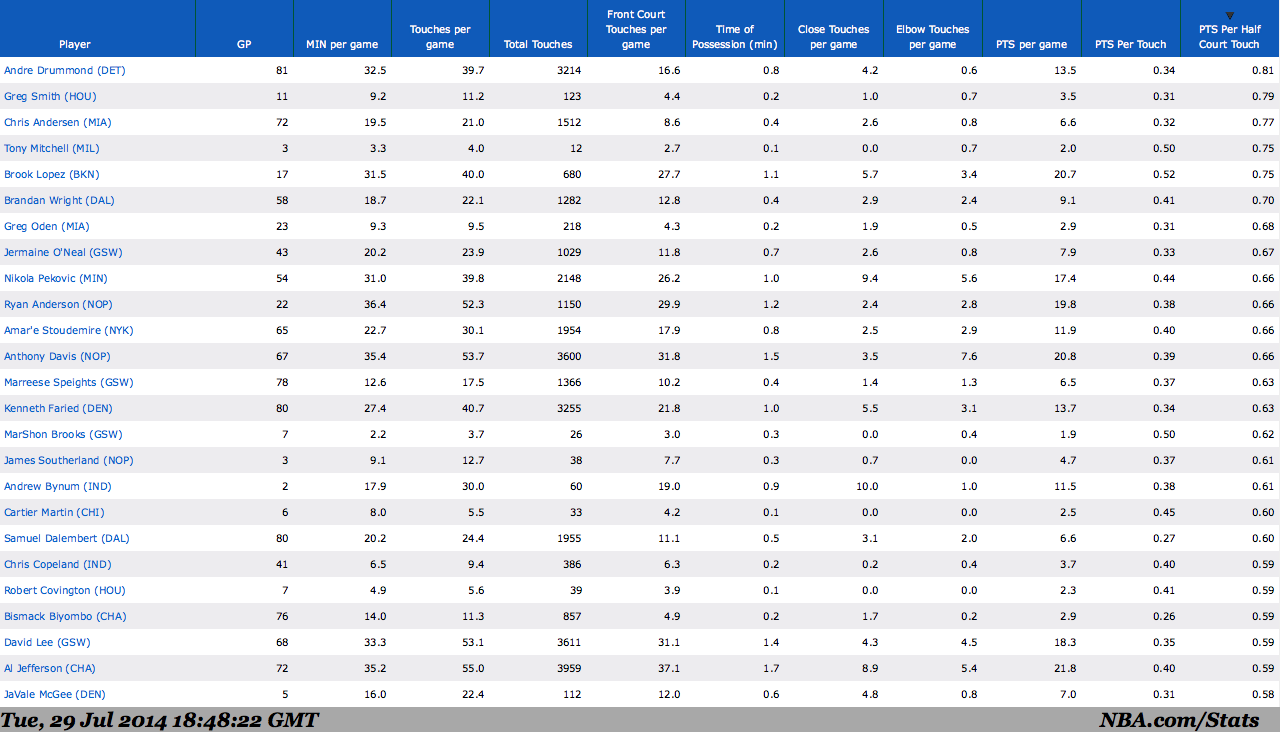 That likely won't continue if Drummond's role in the offense increases, but hey, he's got some wiggle room to remain Detroit's most efficient option:

All of this is a long-winded way of saying: cool, I'm excited to see what Drummond can do with more touches. Even though a lot of his production to date is on dunks and putbacks, every now and then he flashes a little hook here or a nifty drive there to make you realize just how high his offensive ceiling could be with more polish. (I swear someone made this exact same point in the comments yesterday -- if I could find it, I'd link to it.)

Combine this nugget with the fact that Detroit's new bevy of shooters might actually give him some breathing room in the paint, and it's suddenly easy seeing Drummond average something like 15-17 points a game, and perhaps even more.