The curious case of Rodney Stuckey

Inconsistency, injuries, and, most of all, a general manager’s unrealistic expectations made Stuckey’s Pistons career a disappointing one.

Share All sharing options for: The curious case of Rodney Stuckey

Last month, Stuckey signed with the Indiana Pacers for a one-year contract at the veteran minimum, leaving the team with which he had spent the first seven years of his career.

Stuckey's departure was a foregone conclusion, thanks to an overdue exit, years of disappointing team performance, and a new front office regime. The lack of interest around the league was a bit more of a surprise, particularly his accepting a minimum contract.

It's a far different ending than what was originally hoped for when Joe Dumars traded away Chauncey Billups two games into Stuckey's second season to make way for his new point guard of the future. As Pistons fans know well, in the six years since Dumars' move made Stuckey the presumptive franchise cornerstone, the team has gone 179-247.

In six years since Dumars made Stuckey the presumptive franchise cornerstone, the team has gone 179-247.

Perhaps even more indicative of just how wrong-headed the move was, Stuckey has never been the team's best player over the course of a season. At his best in 2010-11 and 2011-12 he at least finished second on the team in win shares behind Greg Monroe, but every other season he checked in at fifth or sixth.

Thanks to retrospect, it's clear that he was an average player who just got far more attention than he should have. It's easy to visualize an alternative career path that would have ultimately led to a quite satisfactory Pistons career.

Perhaps after a six-game loss in the 2008 Eastern Conference Finals, Joe Dumars was frustrated by his long time starting five's lack of urgency. While they were still a group that could win 70 percent of their games, the lack of energy and hunger at times bothered him.

Still, he knew he could address that weakness in other ways -- particularly from the bench. And there were already pieces in place to help that happen. Best yet, these reserves were young and could help transition the roster to the next generation.

By the end of that season, Jason Maxiell and Rodney Stuckey had already cemented themselves as fixtures in the rotation. Arron Afflalo and Amir Johnson had some rough edges to their games, but they were still very young with plenty of potential. Each was part of the exciting bench that had been dubbed as the Zoo Crew. Best yet, on a roster loaded with veterans, the team could weather the inconsistency of young players.

Instead of supplementing the core with complementary veterans such as Chris Webber or Flip Murray such as had been the case in the past, Joe Dumars might have filled the roster with youth. And Dumars' favorite of this youth movement, Rodney Stuckey, would be their leader in the sixth man role that he always seemed best suited for.

But instead of building around his 60-win core, Dumars instead reconstructed the franchise to build around his guard with the 40 percent field goal percentage. He shipped Billups for Allen Iverson, used the cap space to sign Ben Gordon and Charlie Villanueva. But those weren't the only chips he pushed to the middle in his faith in Stuckey. Unloading Arron Afflalo and Amir Johnson for second-round picks or cap space. Signing veterans like Tracy McGrady and Chris Wilcox instead of building around youth. Extensions to Rip Hamilton and Tayshaun Prince. All of these were with a vision of Stuckey as the Pistons' future.

And how in the world did this misconception happen, of an average player as a potential superstar? How did any front office executive ever look at this dude who couldn't dribble or shoot a layup with his left hand or make a three-point shot and see a future star point guard?

But Chauncey's rise from an average player to an elite one over the span of two years was remarkable. Stuckey's eventual replacement as point guard of the future Brandon Knight was damned by similar expectations. In truth, it takes a lot for a clearly flawed player to iron out those flaws -- thoughts to the contrary wound up doing the young players no favors.

The other player was Dwyane Wade. Another combo guard, Wade had earned Finals MVP his third year in the league and was putting up numbers that would eventually create his legacy as one of the best at his position in league history.

After his rookie year in 2008, Stuckey was named to the USA Select Team to help prepare the American team for the Olympics in Beijing, China. He was picked alongside the likes of Derrick Rose, Kevin Durant, and Al Horford, and supposedly managed to stand out. If you crossed your eyes and looked at just the right angle, you could see glimpses of Wade in Stuckey's game. But at the time folks seemingly failed to realize what a special talent Wade really was.

In truth, there was much to like about what Stuckey brought to the table. Young with great scoring instincts and a size advantage over every point guard in the league, used properly he could be a fantastic weapon. But one could sing similar praises of Jason Maxiell at the time. Neither was well-rounded enough to shoulder too excessive of a responsibility.

And as Dumars positioned Stuckey to fail early in his career, he ensured that would be the case with his future decisions -- most notably with his coaches. 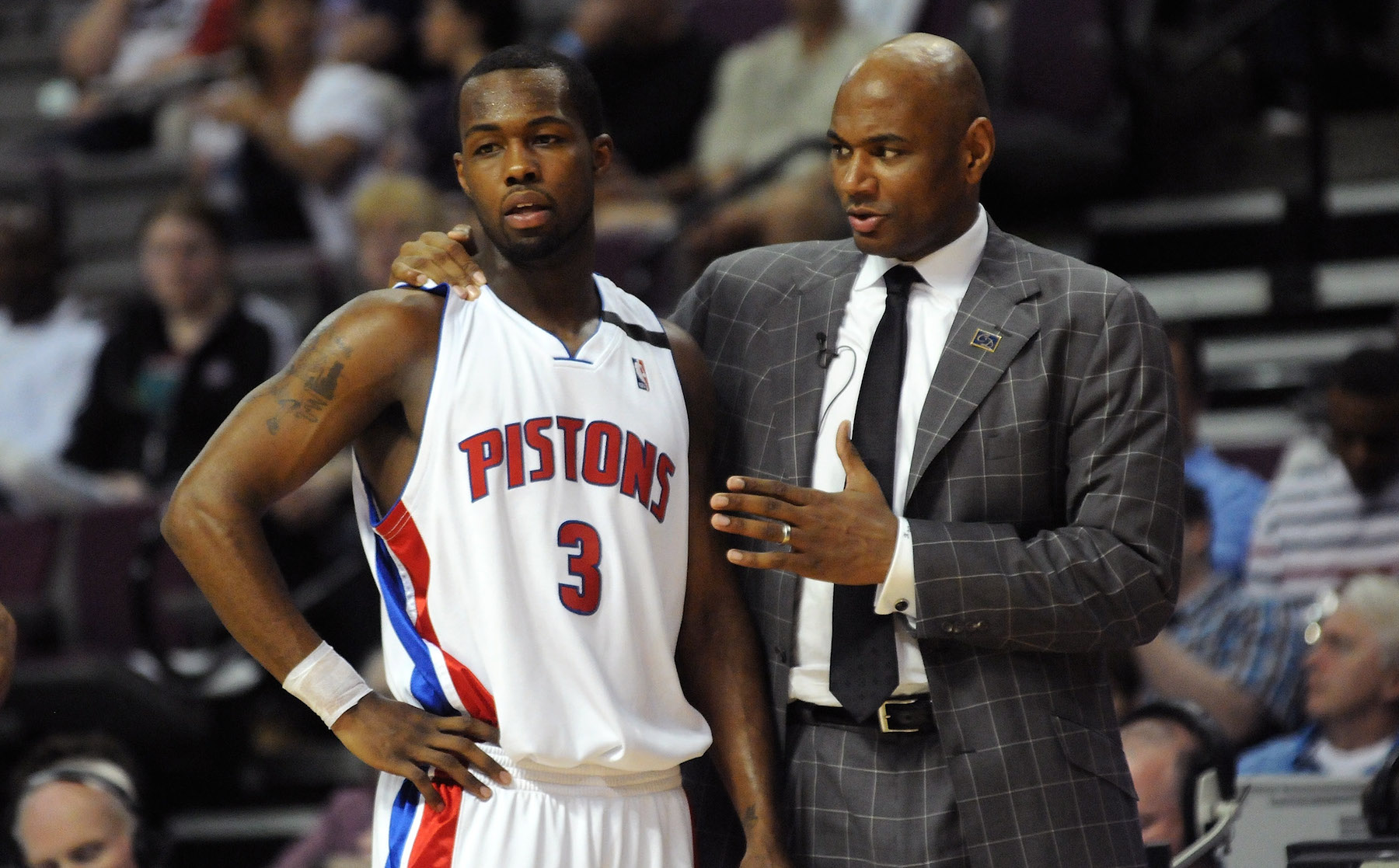 There was never a long-term plan for Stuckey.

There was never a long-term plan for Stuckey. Expectations varied from year-to-year, and when he failed to ever take a Billups-esque step, even his position and identity as a player would be reevaluated -- and not necessarily based on objective evidence.

During his three years as the team's primary point guard, he averaged 5.5 assists per 36 minutes next to only 2.5 turnovers. Not bad for a guy who was expected to grow into the position. It was actually finding efficiency as a scorer that he struggled.

Compare that to one of Stuckey's peer point guards from his draft class, one drafted even higher than him. The two had an identical number of assists per 100 possessions, steals per game, and win shares per 48 minutes over their first three years. Both the Pistons and Grizzlies fanbases were antsy about their teams' sub-.500 performances, but the Memphis front office stayed the course with a $40 million extension to Mike Conley and sticking with Lionel Hollins despite a 53-68 record at that point.

While Conley never developed into the star that the Grizzlies might have hoped for when they drafted him with the fourth pick, he has fulfilled his potential thanks to the stability, consistency, and allowing him the opportunity to develop. The same can't be said for Rodney Stuckey.

While Conley has rewarded the Grizzlies' confidence by performing as a steadily above-average point guard, Stuckey has seen four different coaches who have shifted him from point guard to shooting guard to sixth man to situational scorer.

Rodney Stuckey came into the league an unusual and gifted young player. Through incompetent leadership and management, the Pistons franchise essentially destroyed his career. Over the past four years, another unusual and gifted young player has had the opportunity to watch this demolition take place. With Stuckey's context, perhaps it's not terribly surprising that Greg Monroe has to this point been unwilling to tie his long-term future to this franchise.

Stuckey likely could have found a suitor willing to pay more than the minimum deal he agreed to with the Pacers. His was probably to show that Stuckey could serve as a quality replacement to Lance Stephenson, and that he was capable of playing a significant role for a contender.

With Paul George's devastating broken leg during a Team USA scrimmage this summer, the Pacers status as contenders disappeared. Stuckey at least has the opportunity to play more of a featured role, but doing so for a poor team leaves him no better off than he was for the Pistons last season. It was another blow of bad luck for a player who has seen far too little of it in his career thus far.

In many ways, Stuckey was the mainstay and lightning rod for the Pistons' disappointing past six seasons. His departure, along with Dumars', serves as a fresh start for the organization -- but hopefully it can be one for him as well.