Pistons are the best bad team of all time

And they have the win streak to prove it. Maybe, just maybe, they're not a bad team after all.

Share All sharing options for: Pistons are the best bad team of all time

The Detroit Pistons are the best bad team in NBA history, at least according to their current dominating run since the release of Josh Smith.

Detroit is playing not only its best ball of the season but great basketball period.

The Pistons have been liberated and currently sport a five-game winning streak where they are easily handling every foe. Whether you want to credit the arrival of Jodie Meeks, the subtraction of Smith or, perhaps, the Anthony Tolliver effect, Detroit is playing not only its best ball of the season but great basketball period.

Observers still haven't caught on. After all, even after the five-game winning streak the Pistons still have the fourth-worst record in the NBA. But could this terrible team actually be, gasp, good?

As they say, the numbers don't lie. Check out the data compiled by SB Nation's Drew Garrison. 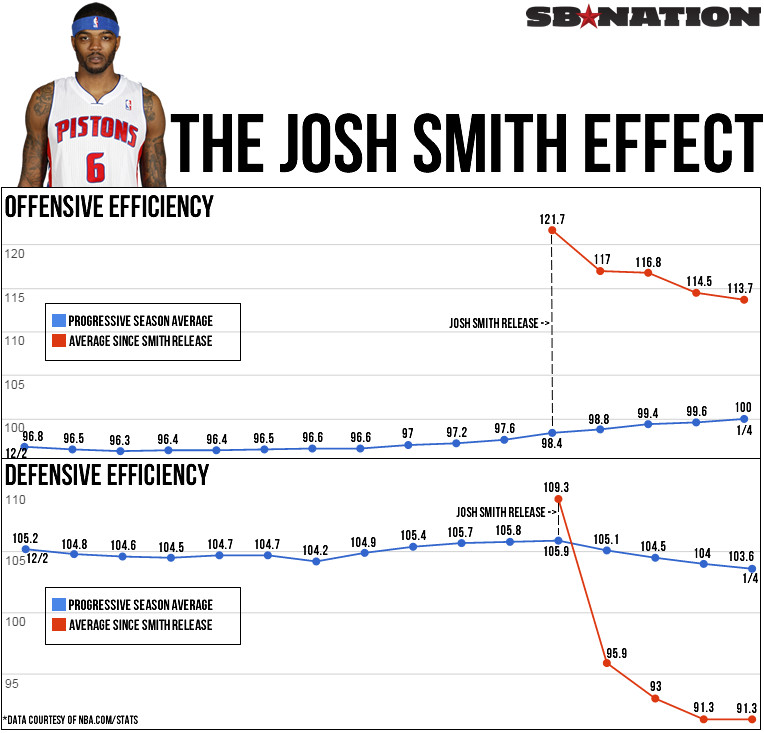 Yes, every team hits a soft spot on their schedule where they go on a little winning streak. So how rare is a four-game win streak by at least 16 points per game in a single season? It's only been done 82 times in NBA history. And is only reserved for the NBA's elite teams.

Here is just a snapshot of the teams that have won more than four in a row.

Reviewing the records of all 82 teams on the list, the average winning percentage is 0.681. Detroit's is currently .303 and was sitting at .207 at the start of the 16+ streak. Also, 96 percent of the teams finished the season with a winning record and 94 percent made the playoffs.

Detroit has joined some truly elite company. Except for one outlier -- the 1992-93 Sacramento Kings. The team was a competitive 13-17 during it's dominating four-game streak, including a 56-point pasting of the Sixers. But the team stumbled for a stretch, then it lost All-Star Mitch Richmond on Feb. 11 to a season-ending thumb injury, after which the wheels came off and the team finished the year 25-57.

Will Detroit be just another outlier on the list? Or will it join the 94 percent of the teams that ended up in the playoffs? We are about to find out. The Pistons schedule gets a whole lot tougher coming up, with the Spurs, Mavs and Hawks on the schedule this week. To climb back into the playoff picture of the lowly Eastern Conference, the Pistons will need some quality wins against tough opponents.

As the chart above shows, if the Pistons somehow manage to dominate Tim Duncan and company in San Antonio on Tuesday by 16 or more points, the Pistons will be one of just 15 teams in history to accomplish such a dominating five-game winning streak. Only four have had such a six-game streak. And only one, the 2004 Pistons, has had a seven-game streak.

The Stones accomplished the feat during their '04 title run better known for the simultaneous streak of holding five consecutive opponents under 70 points. Detroit had a 16+ margin-of-victory streak of four the next season as well and the team, coincidentally, went to another NBA Finals. There they lost to, you guessed it, the Spurs.

Obviously, the Pistons would have to go on an unprecedented run to finish above .500 and a nearly as tough effort to make the playoffs. But the Pistons aren't just feasting on a few downtrodden teams. They are proving that they are finally a team to be reckoned with. Who knows how far that will take them, but perhaps the best bad team ever isn't actually a bad team after all.