Twenty-one years ago, Grant Hill won Rookie of the Year. How does Stanley Johnson compare?

Share All sharing options for: Stanley Johnson and the Grant Hill standard

Not long after Andre Drummond started his NBA career, he was drawing comparisons to Dwight Howard. Andre was putting his name in the NBA record books, next to some of the great big men in NBA history. Now, fans and fan blogs have begun to compare Stanley Johnson to an NBA great with his name in the record books: Grant Hill. That is quite a standard for the Arizona rookie to meet. How well does Johnson hold up?

First, there is the physical aspect. Both are prototypical small forwards. Hill is 6'8" and Johnson is 6'7". Johnson has 20 pounds on Hill, weighing in at 245 versus Hill's 225. Hill was a lanky small forward, but he was decently toned. Johnson is more compact and filled out, but also quite toned. Here are their rookie year photos side-by-side-for comparison. 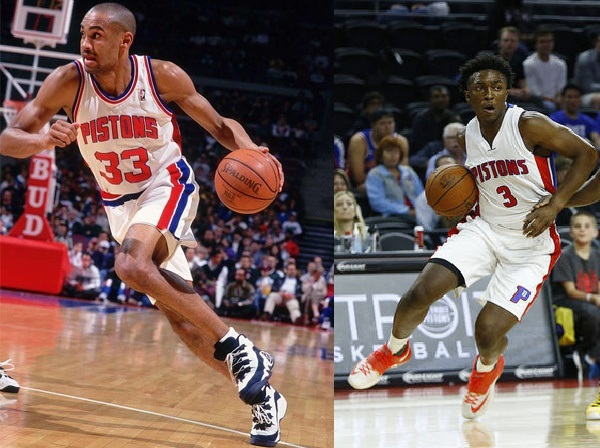 They both are, or were in Hill's case, multiple position players. Hill was able to play anywhere from point guard to small forward, but Johnson can play pretty much anywhere except for center. Johnson opened a lot of people's eyes in the preseason opener not just because he had a great scoring game, but also because he was able to man the point guard position well (despite his six turnovers). In today's NBA, Hill also likely could have played some small-ball four, à la Paul George.

Second, you have to look at their college statistics. Hill played for national powerhouse Duke, staying there for four seasons. Johnson played for Arizona but was only there for one year. To ease the comparison, we'll look at both of their seasons when they were 18.

Both Johnson and Hill started their collegiate career as starters on their respective teams. Hill had a better overall field goal percentage (51.6-percent) from the field because of his drives to the basket and very few three pointers (1-for-2 on the season). Although he got to the line nearly four times a game, he was only a 60.9-percent free throw shooter.

Johnson, on the other hand, had a lower field-goal percentage (44.6-percent) but shot over three 3-pointers a game, shooting 37.1-percent. He also nearly got to the line four times a game but was able to make free throws at a 74.2-percent clip.

Granted - pun intended - Hill had a better college career. Hill would eventually lead the Duke Blue Devils to a national championship and finish his college career with a 53.2/37.6/69.8 shooting line. In regards to rebounds, they both averaged about six rebounds a game (Six exactly for Hill, and 6.5 for Johnson). However, Hill excelled compared to Johnson with regard to getting his teammates involved, averaging 3.6 assists per game to Johnson's 1.7.

Lastly, we have to compare how they did when they got to the NBA. So far, all we have to go on with Johnson is his Summer League and preseason stats. For argument's sake, let's compare those stats to what Grant Hill did in his rookie year.

Hill had an awesome rookie year, sharing Rookie of the Year honors with Jason Kidd. Hill started 69 of the 70 games he played and averaged 38.3 minutes per game. He averaged 19.9 points per game, 6.4 rebounds, five assists, 1.8 steals and nearly a block per game. He shot 47.7-percent overall (on more than 15 shots a game) and shot 73.2-percent (on over seven attempts per game) from the line, but struggled from three, shooting 14.8-percent on only 0.4 attempts per game.

But you have to remember the team that Hill came to. Hill was a 22-year-old, four-year college veteran, coming to a team that won 21 games the year before starting Isiah Thomas (age 32), Joe Dumars (age 30), Sean Elliott, Terry Mills and Greg Anderson. Thomas would retire, Elliott would be traded, and Anderson was replaced by Mark West. The team was in disarray. Luckily, Johnson does not come to the same kind of situation.

Johnson comes to a team with a potential young superstar in Andre Drummond. The point guard position is solidified with Reggie Jackson (if he maintains his performance from last year), Steve Blake, and Brandon Jennings (when he comes back). Shooting guard is still in question if Kentavious Caldwell-Pope can't fix his home and road splits, if Jodie Meeks is not better than last year, and if Reggie Bullock cannot maintain the stellar play he's had in the preseason. Power forward is also in limbo as the team is trying to determine if Marcus Morris or Ersan Ilyasova is the long-term solutions at the position. So it would seem that Johnson has a starting spot at small forward, but that is not the case for now.

Even still, Johnson will get plenty of minutes. Johnson averaged nearly four more minutes per game in the preseason than Morris, and that is by design. Stan Van Gundy likes Johnson's potential, but does not want to throw everything at him just yet. He has to earn it. If he continues his play thus far, then that should be soon.

Since Hill averaged more than 36 minutes per game in his rookie year, we'll compare Johnson's and Hill's stats at the per-36 level.

So the comparison, as far as physique and stats, seems very similar. But it isn't for one simple reason: Johnson has only played 13 games. Of those 13 games, not one has mattered. Five were in Summer League, something Hill never had a chance to take part in, and the other eight were in a meaningless preseason against mostly second-unit players. Also, that is who Johnson will mostly be playing against this year (at least to start).

Johnson is not being looked at to be the leader of this team, that falls to Andre Drummond. After Drummond, it's Reggie Jackson. Then, it might be Johnson. Johnson has a chance to have a wonderful rookie season and is even hearing his name in Rookie of the Year talk. But he won't have the opportunities Hill had (playing time and responsibility). So, just as we did for the Drummond and Dwight comparisons, we need to take some time before comparing Johnson to Hill.

Do you see the comparison? Johnson has also been compared to a better version of Metta World Peace. Which do you think fits better? Let us know in the comments.