A post-up game consists of more than making hooks, layups, dunks and jump shots when given the ball in the post. It also consists of being able to recognize what the defense is doing and making smart plays. This is something Drummond has not done yet, but can learn. (This is also one reason some fans said Drummond should be traded and Greg Monroe extended.)

Stats.nba.com says that Drummond has been a part of 25 post-up possessions and taken 23 shots. Unfortunately, though stats.nba.com allows you to watch videos of most plays, they do not separate the videos based on play type. Drummond has 23 post-up field-goals. He has taken 19 hooks which are usually the result of a post up play. Some layups can also be the result of a post-up play.

Having watched all of the hook shots and jump shots, as well as many of the layups, there were a couple of conclusions that can be made.

Of all of the hook shots that Drummond attempted, the only ones he made were with his right hand. This makes sense as he is right handed and that would be more natural for him than his left. Also, all of his makes were either in front of the basket or from the right block, but none from the left block. 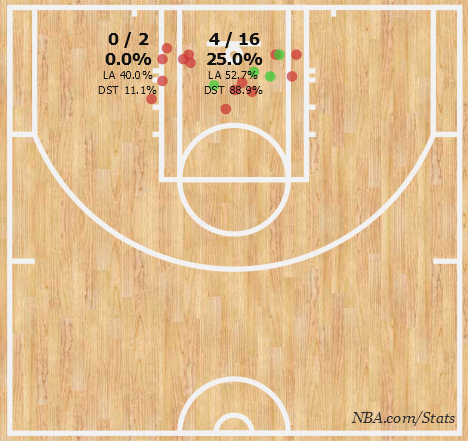 The other conclusion is that there were a lot of missed opportunities for Drummond to pick up assists. On all of Drummonds missed hook shots (15), there were at least 21 open players. There were 20 players open for a three-pointer and another open for a cut.

Now, there are a couple of things that can be drawn from this. One is that though Drummond has been inefficient in his post-ups, teams are still paying attention to him. When he gets the ball, they are collapsing. There were only three plays that I watched where no other player was open, and those were because Drummond shot as soon as he got the ball.

The other sub-conclusion, if you will, is that Drummond could probably be a triple-double threat every night if his court vision was better. Mind you, it may not be his court vision but instead his desire to score or be top dog. But the more efficient Drummond becomes on connecting on his post-up field goals, the more open other players will be for three pointers and cuts.

Using the same gifs Steve Hinson used in his Drummond post game article (great read, go read it), you can see how open some players are. Look at how wide open Steve Blake, Jodie Meeks and Anthony Tolliver are open on this play.

In this play, Ersan Ilyasova and Reggie Jackson are also wide open. If Drummond kicks the ball out to either of them, they can swing it out to Kentavious Caldwell-Pope who would have been open for a three or ran a cut.

The Pistons are building the team around Drummond. Drummond has been an amazing pick-and-roll finisher. But other teams know this and they are prepared to let Jackson shoot rather than #LetDreDunk. In (only) four games this year, Drummond has 12 plays where he is the roll man. That equals one play as the roll man in every 13 minutes of play. Stats.nba.com does not show roll man stats for last year, so we cannot determine if this is up or down from last year. Comments on the game threads would suggest that it is not happening as often as it was last year, specifically after Jackson was acquired.

If all Drummond was good for was being a roll man (because I doubt they want him to be a pick-and-pop player), teams can easily defend against that. But if you can mix up the offense by throwing the ball into Drummond in the post from time to time, then that will keep the defense on its toes. The key to Drummond's post game is not only his shooting efficiency, but also his ability and willingness to pass.

Would you be willing to "sacrifice" (have fewer wins but maybe still make the playoffs) this season in order to develop Drummond's post game? Answer the poll and leave details in the comments.