Andre Drummond is currently averaging the most rebounds per game since 1970-71. But he could be better.

Share All sharing options for: Andre Drummond can improve as a rebounder and that should terrify the NBA

For most aspects of life, it is important to continually work at getting better at something. Whether it's cooking, building or drawing, it's not going to be perfect right away. Your first steak might be good, but it won't be great.  Eventually, you get better and learn how to cook the steak you want.

Andre Drummond is a good rebounder. But he's still a sous chef, not yet at the executive ranks. And the fact that the league's best rebounder could get better should terrify everyone in the NBA.

[Editor's note: All stats from before the Phoenix Suns game]

It seems impossible. He already averaging 16.9 rebounds per game. That is the most since Wes Unseld in 1970-71. He is averaging 3.8 more rebounds than the next closest person, DeAndre Jordan. Shouldn't we be happy and just watch in awe? Sure, if you want to.

But if he boxed out more, he could be BETTER.

Thanks to some new features on stats.nba.com, we have the opportunity to look at a player's rebound logs. You can even filter them based on if they are contested or not, and by how many people, the distance of the shot, who the shooter was, etc. Unfortunately, it does not show you which rebound opportunities they lost. For this article, we'll be looking at contested rebounds, where the shot distance is 10 feet or greater and the rebounder was not the shooter.

The reason for the shot being 10 feet or greater is to allow that player, Drummond in this instance, time to get in box out position. When a player drives in for a layup, the player's body does not have enough time to box out (unless it is a planned play). We will also look at examples from other players who boxed out Drummond to get the rebound.

In the game against the Houston Rockets, Drummond had four qualified rebound. Here are the pictures of where Drummond was as the ball hit the rim. 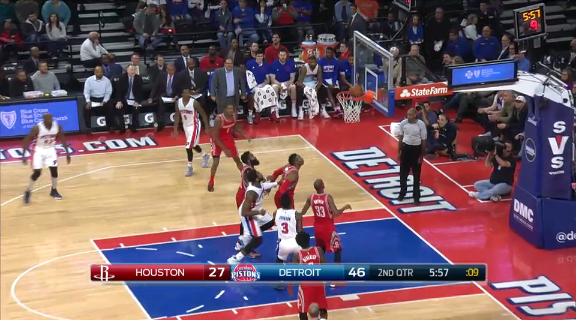 This first image is off of a Stanley Johnson running jump shot. Because the Pistons are on offense, it is normal for the offensive team to be boxed out, as Howard was doing to Drummond. Luckily, Drummond is an athletic freak and he was still able to get the rebound. 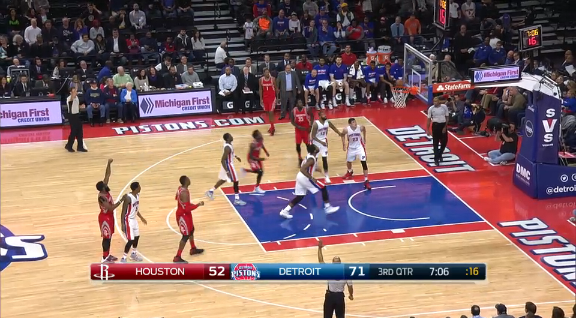 It is pretty obvious to tell who shot the ball in this photo and from there. And Andre kind of has nobody around him. But if you look at his posture, he is not in box out position. This means anyone could have run by him, as Patrick Beverley did. But again, Drummond is a freak of nature and got the board. 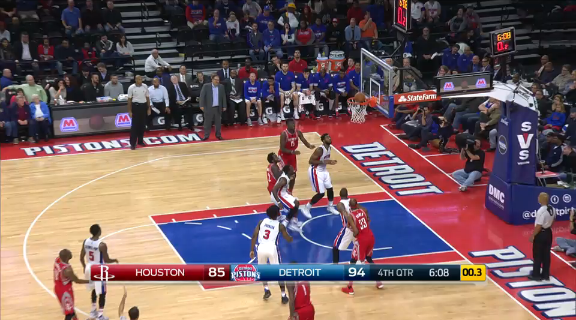 Drummond almost looks like he is going to box out as he is in front of his man. However, his arms are close to his body instead of out to his side. Again, he got the board. 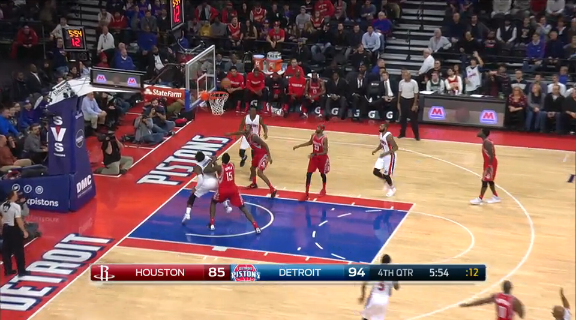 This is the closest of the four where it looks like Drummond is boxing out. But look at where he is and look at his arms at his side! Clint Capela has him under the basket. Of course, Drummond gets the offensive board and tips it in.

These are four examples of contested rebounds from jump shots Drummond pulled in. But how many of them did he not pull in? 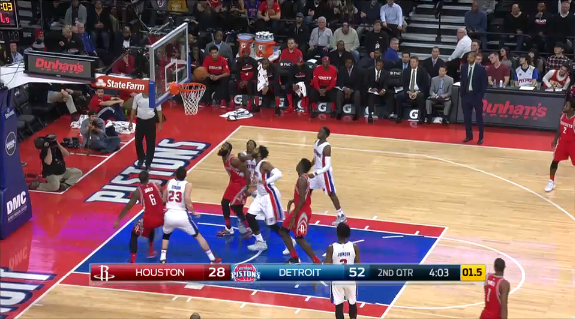 In this image, Capela shot a left handed hook shot in the middle of the lane. Instead of boxing out Capela, his man, and going straight for the rim, Capela eventually got the rebound (after a James Harden offensive rebound tip attempt) and scored. 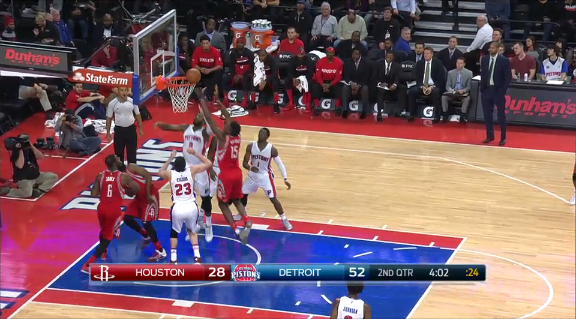 That is where Drummond was when Capela got the offensive board and eventually laid it in. Had Drummond boxed him out, he likely would have had the rebound.

Here is another rebound opportunity (against the Brooklyn Nets) Drummond would have capitalized on if he'd have boxed out his man. As the shot hit the rim... 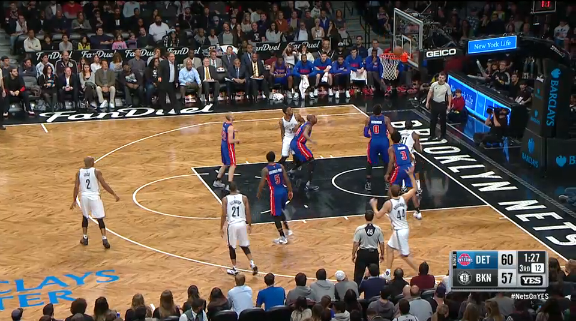 The offensive rebound Brooklyn pulled down. 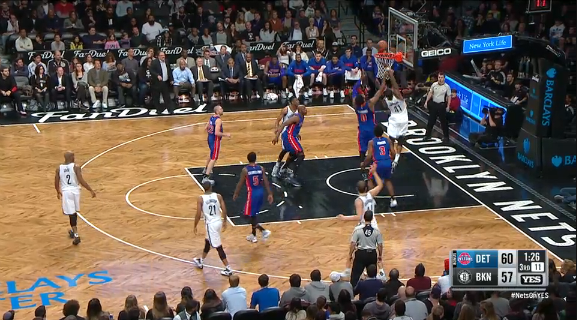 Drummond's rebounding numbers had been helped by the Pistons defense when they were holding teams to very low shooting percentages. However, the Pistons are now 20th in opponent 3-point percentage and 22nd in opponent field-goal percentage. As our opponents have shot better, Drummond's opportunities have gone down.

Now, there may be some give-and-take here. Because of the nature of your body when you box out, maybe Drummond would not have pulled down as many rebounds. Maybe "roaming free" is what has allowed him to get as many rebounds as he has. It may be better for Drummond to not have to take the time to decide if he should box out and just roam free. That may lead to indecisiveness which leads to lost rebounds.