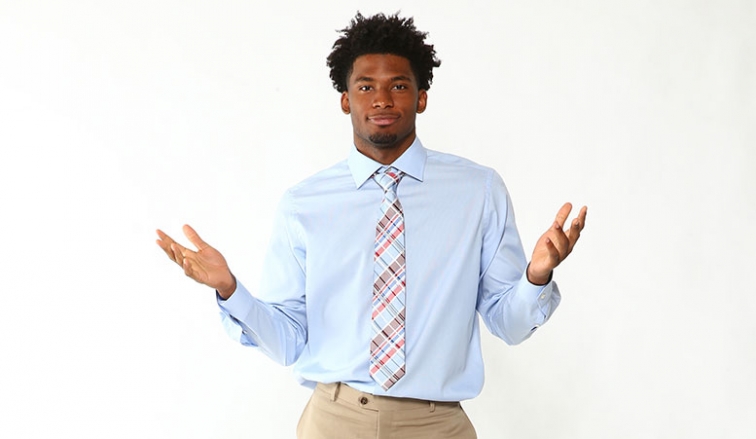 When SVG mentioned in the Pistons draft press conference that it wasn't even a choice between Winslow and Johnson, two players with such similar skill sets where the former graded out as high as the fifth pick on most mocks leading up the draft, it set off a "DOES NOT COMPUTE" red flag in my head. What's wrong with Winslow? Beyond the things we do know - he measured under 6'5 in socks, his jump shot isn't deadeye marksman, I was lead to wonder if it was a variable beyond physical talent that prompted the Pistons to pass on an elite defender like Justise.

This is where I went to work, and by went to work I mean annoying the living hell out of friends who are employed on the business side of Detroit professional sports. As I began banging the phones (or in one case Facebook IM) to inquire as to what they heard there was consistency amongst their responses.

Let me preface that I recognize everything I'm typing is completely unsubstantiated, so inspired by the kings of rumormongering, Peter Vecsey and Chris Broussard, I was told on good authority by friends who work for the Palace that the reason the Pistons opted not to draft Justise Winslow was because he simply didn't want to be here. His attitude at his workout was sub-par - something more than one person in the organization responded to me with.

Which by the way, if this is true, kudos to Stan Van Gundy for taking the high road and not throwing Justise under the bus. Extra karma points to Stan for bringing the conversation back to how great a talent Stanley Johnson is. When looked at in this context, and Stan was mentioning treating draft picks right when they came to the Palace, it kind of all makes sense now. He may have been subliminally reinforcing the Pistons commitment to running a high-class organization.

So if you're going to spend a top-ten draft pick on a critical position and it's between one prospect who works out for you begrudgingly, versus another who has indicated that he has great relationships with your starting center and point guard and is visibly excited about the prospects of joining your franchise, isn't it obvious who you pick?

And thus, no Justise for the Pistons, but for at least one fan, peace of mind that we chose the best player for our franchise available.