NBA playoff standings: A look at the final five games for Pistons, Pacers, Bulls and Wizards

The Pistons dropped to eighth place on an off day with the Pacers having knocked off the Knicks. With the Pistons, Pacers, Bulls and Wizards all having five games left, what does that mean?

Share All sharing options for: NBA playoff standings: A look at the final five games for Pistons, Pacers, Bulls and Wizards

On Sunday evening, the Indiana Pacers beat the New York Knicks on the road to reclaim the No. 7 seed in the East. The Chicago Bulls held on to a close one against the Milwaukee Bucks on Sunday to climb back within two games of the final playoff spot. The Washington Wizards fought back against the Los Angeles Clippers but fell short at the end, falling four games out of eighth place. With all four teams having five games left, let's see how this should play out: 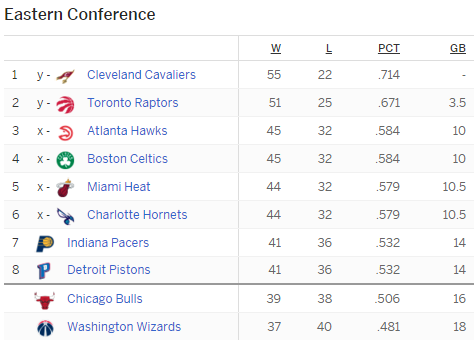 As you can see, it's a close race for those final two playoff spots. And with five games remaining, it remains possible (though not likely), that the Pacers or Pistons could even climb up to the third or fourth seed. So, let's see what each team has left.

None of the four teams have an easy path to the playoffs. Indiana's next two games are against two teams still fighting for the top two spots in the Eastern Conference. It is very possible that Indiana loses both of those games. On the other hand, their last three games contain three teams who, now eliminated from the playoff hunt, are jockeying for lottery position. It is very likely that they could go 3-2 in their last five games, finishing 44-38.

There are two magic numbers the Pistons are looking at: three for the Bulls and two for the Wizards. One of those could very well be taken care of on one night. With a game left against the Wizards, if the Pistons win that game, they don't have to worry about the Wizards catching them. That could already be the case before that game even tips off, but if it is not, expect a tougher game.

The Pistons could secure their playoff spot as early as Wednesday. With the magic number being three, the Pistons need any combination of Pistons wins and Bulls losses that add up to three. On Tuesday, the Pistons will face the Heat in Miami while the Bulls travel to visit the Memphis Grizzlies. Both of their opponents are fighting for playoff positions. The Grizzlies are fighting for the 5th or 6th spot, which determines if they face the Los Angeles Clippers (who just got Blake Griffin back) or the Oklahoma City Thunder, respectively. The Heat, if they were to win out and any of the two teams immediately above them lose, will gain home court advantage. You can expect both of those games to be slug fests.

But if the Pistons beat the Heat, and if the Bulls lose to the Grizzlies, then the Pistons will face the Orlando Magic on Wednesday with a chance to guarantee their playoff spot. The Magic still have a chance to move up a few spots on the draft board with a couple of losses, so there's no real reason for the Magic to try hard to win. Not unless they want to play spoiler. With Detroit being the only team of the four that Orlando faces, let's hope that is not the case.

But if that scenario does not happen, the Pistons are going to have a tough fight on their hands. The only game left on their schedule which may be a cake walk is against Cleveland. By that time, they will very likely be set in their position and know who they're going to face in the playoffs. If that happens to be Detroit, they could likely rest LeBron James, Kevin Love and Kyrie Irving for the playoffs (especially since the latter two have injury histories). But with two games against Miami and one against Washington, both teams still fighting for position, they will not be won easily.

Can we count on the Bulls to lose three of their five games for us? Maybe. Again, Memphis, Miami and Cleveland could all still be jockeying for positioning. But if Cleveland wins first place before then, do they sit their players, or do they still strive to win as many as they can just in case OKC or LAC get through San Antonio and/or Golden State in the West? New Orleans and Philadelphia are also jockeying for lottery position, so we can almost count them as wins for the Bulls.

Let's hope it doesn't come down to that. Let's hope the Pistons can win their next two and Memphis can take one from the Bulls and we end this on Wednesday. What say you, DBB?